Hogg the fall guy as China shines spotlight on Cathay

Cathay Pacific chief executive Rupert Hogg resigned on 16 August after the airline had become a focus for mainland media and regulatory scrutiny amid pro-democracy protests in Hong Kong.

That pressure prompted a mid-August about-face from the Swire Group-owned operator, which counts Air China as a major shareholder and relies on access to mainland airports and airspace for many of its services.

Cathay’s “hands-off” approach to the protests was dropped, as the airline instead released a series of statements supporting the Hong Kong government and police efforts to curb protests. It then culminated in the announcement of Hogg’s departure and the swift appointment of a successor.

Cathay and its employees, who were accustomed to working for a business that did not seek to interfere in their political beliefs or wider happenings in Hong Kong, are now calculating whether this is a fundamental change for the company.

As the unrest in Hong Kong continues, one thing is clear: it is unlikely that the Oneworld carrier has been left with many questions about the Chinese state’s expectations for businesses during periods of unrest, or the risks inherent in falling short of those expectations. 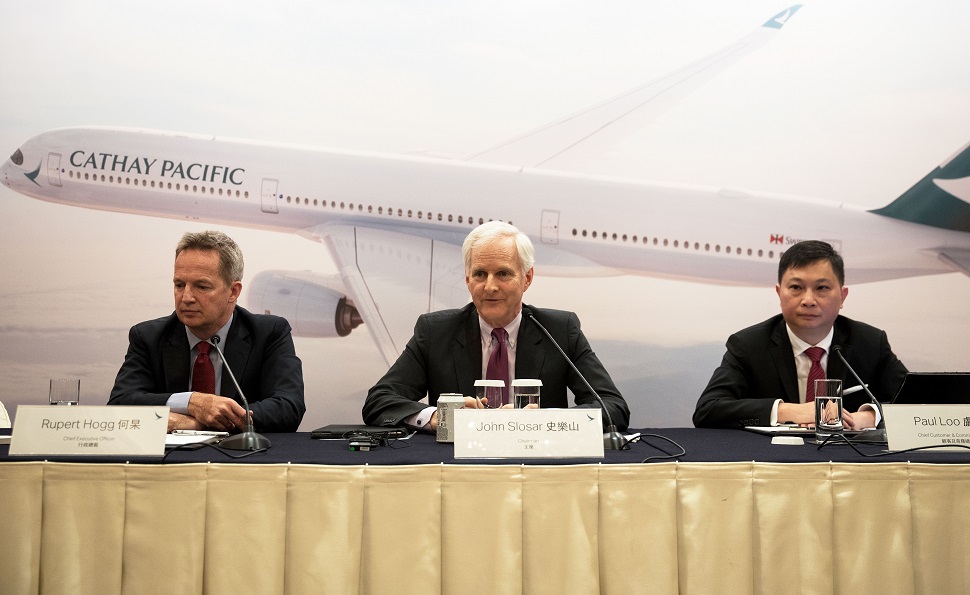 The largely peaceful demonstrations – over the Hong Kong government’s plan for a mainland extradition bill and the police service’s handling of the protests – had been taking place for weeks before Cathay and Hogg were thrust into the spotlight.

But those demonstrations intensified going into August, receiving media and political attention across the world. China’s ruling party was growing increasingly frustrated at the protesters’ show of defiance, and began to amass troops on the territory’s border.

At the same time, Cathay became one of a number of Hong Kong-based firms to face heightened mainland scrutiny.

That scrutiny focused on a perception that Cathay and other businesses may have been supporting the pro-democracy protests – or at least showing little interest in restricting the involvement of their employees.

The Hong Kong flag carrier was a high-profile target for that pressure, given its long association with territory and the size of its local workforce.

Its history as a British-owned airline also makes it a microcosm for Hong Kong’s complex geopolitics, leaving it vulnerable to suggestions – fair or otherwise – that it is not operating in line with mainland sensibilities.

Through to early August, Cathay had maintained a hands-off attitude towards the protests and the involvement of its staff, while generally avoiding any pronouncements on political developments in the territory.

“We employ 27,000 staff in Hong Kong doing all sorts of different jobs… we certainly wouldn’t dream of telling them what they have to think about something,” said the carrier’s chairman John Slosar as recently as a 7 August results briefing. “They’re all adults, they’re all service professionals. We respect them greatly.”

Slosar was speaking two days after protests had significantly affected Cathay’s operations, when air traffic controllers and other airport workers went on strike in support of the demonstrators.

And for weeks, it had been a matter of record that Cathay employees were involved in the protests.

On 23 July, for example, the Cathay Pacific Airways Flight Attendants Union (FAU) posted on its Facebook page: “FAU is now calling all of you to join the 26 July 2019 peaceful protest… in the Hong Kong International Airport Terminal 1 Arrival Hall. We aim to demonstrate a peaceful manner and take the time to tell the people from all over the world on what has been happening lately in Hong Kong.

“Let’s stand up for our human rights and be connected with the rest of the HongKongers [sic].”

Some Cathay pilots were also openly supporting the protesters’ cause.

But Cathay was about to pay a price for its reluctance to comment on – or interfere with – the activities of its staff in relation to the demonstrations.

Most significantly, a 9 August “severe risk alert” from the Civil Aviation Administration of China called on Cathay to suspend employees who had been involved in “illegal” protests.

China’s was the only aviation authority to take such action against Cathay.

Chinese state news agency Xinhua wrote on 10 August that the CAAC’s intervention was necessary because “the airline failed to suspend the service of flight staff accused of crimes related to the recent riots, and leaked flight passenger information with ill intent, which has posed potential serious risks to aviation safety and has increased the inflow of safety risks from Hong Kong to the mainland”.

Xinhua’s report was partly referencing stories alleging that a Cathay pilot had been arrested for rioting, and that staff had released details on social media of the Hong Kong police football team’s flight plans.

There were also reports that a pilot had spoken out in support of the protests during a flight.

Xinhua explained that the CAAC required Cathay to suspend employees involved “in illegal demonstrations, riot activities and other offensive and aggressive behaviours”, if it were to continue operations to China and within its airspace.

Cathay was told to immediately begin supplying a list of “crew serving flights to and over the mainland”.

It was also required to report back to the CAAC by 15 August on actions it had taken to address “safety” concerns.

Amid this sudden focus on Cathay, Global Times, a state-run English-language newspaper, carried an editorial on 11 August entitled ‘Cathay Pacific must face up to safety issues’.

It alleged that the airline “downplayed… abominable actions” by staff, “undermining the trust of the industry and the public”.

“To act according to various norms is Cathay Pacific’s obligation,” the editorial states. “It is hoped that the airline could make constructive efforts to regain the trust of mainland people. If Cathay Pacific continues sacrificing aviation safety and high-quality services for political passion within the company, it then chooses to undertake the price of great losses on the mainland market.”

Some of the commentary stretched the anti-Cathay sentiment to its limits, equating the risk posed by its employees with events such as 9/11 and the disappearance of Malaysia Airlines flight MH370.

Global Times quoted a research fellow from China’s Ministry of Commerce as saying: “The civil aviation industry is special, because if an airline is not trustworthy, it will generate huge risks. We cannot forget the September 11 attacks or the missing Malaysia Airlines flight.”

As tensions increased between the protesters and authorities, businesses on the mainland were instructing staff to avoid booking flights with Cathay, according to state-run media.

At the same time, a “#boycottCathayPacific” hashtag was trending on Chinese social media, according to the same reports.

Hong Kong Free Press – which describes itself as an “independent and credible English-language news source in Greater China” – carried an editorial on 10 August offering an alternative take on the actions and rhetoric from the mainland: “Companies are getting caught in the cross-fire of Hong Kong’s pro-democracy unrest, with Chinese state-run media inciting boycott campaigns against firms seen to be backing the protesters,” it suggested.

But amid the scrutiny of its actions – and another round of airport protests that caused more flight cancellations – Cathay made an abrupt change to its pronouncements about the demonstrations.

On 13 August, it stated: “Cathay Pacific is deeply concerned by the ongoing violence and disruption impacting Hong Kong. We resolutely support the Hong Kong SAR Government, the chief executive [Carrie Lam] and the police in their efforts to restore law and order. We condemn all illegal activities and violent behaviour, which seriously undermine the fundamental principle of ‘One Country Two Systems’ as enshrined in the Basic Law.”

It expressed a similar sentiment the next day, adding in a separate release that “two pilots have been terminated in accordance with the terms and conditions of their employment contracts. One is currently involved in legal proceedings. The other misused company information on Flight CX216/12 August.”

Two days later, Hogg’s departure was announced, along with that of chief customer and commercial officer Paul Loo.

Slosar explained: “Recent events have called into question Cathay Pacific’s commitment to flight safety and security and put our reputation and brand under pressure. This is regrettable as we have always made safety and security our highest priority. We therefore think it is time to put a new management team in place who can reset confidence and lead the airline to new heights.”

Hogg himself stated: “These have been challenging weeks for the airline and it is right that Paul and I take responsibility as leaders of the company.”

Hogg has been replaced by Augustus Tang, who was chief executive of Swire Group company HAECO. Loo’s replacement is Ronald Lam, who was leading recent Cathay acquisition HK Express.

Before the crescendo of events that eventually led to his departure, Hogg was succeeding in getting Cathay back on track amid a three-year transformation effort.

Indeed, as recently as the 7 August results briefing, Cathay hailed the progress of its transformation programme as it reported a more-than-threefold increase in operating profit for the first half of 2019.

The key questions now are whether Cathay’s conversion to the cause will stop mainland fretting over its activities, and what its actions mean for the business and staff in the medium to long term.