China hopes to sell up to 300 Chengdu/Pakistan Aeronautical Complex (PAC) JF-17 Thunder fighters in Africa and the Middle East over the next five years.

This target was revealed by a spokesman from China National Aero-Technology Import & Export Corporation (CATIC), the country's military aircraft export agency, in an email to Flightglobal.

So far, only Pakistan has ordered the JF-17, with firm orders for 150 examples - Pakistan has said it could buy up to 200. Islamabad is about to equip its third squadron with the type.

"In the next five years, CATIC intends to sell up to 300 JF-17s to several countries in Africa and the Middle East," says the spokesman.

"CATIC sales and customer support teams are highly motivated and CATIC is looking forward to making the upcoming years fantastic for the JF-17 and its users."

An industry source in Pakistan who is familiar with the JF-17 programme says joint Chinese/Pakistan sales efforts have made "considerable progress" following the type's appearance at the Dubai air show in November 2011. 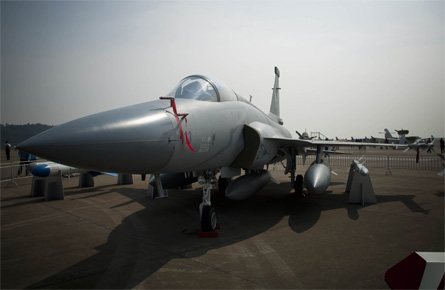 CATIC and PAC mounted a major sales effort at Dubai, bringing three Pakistan air force JF-17s to the show. One example was on display in the static area, while another performed in the flying display - the third was a back-up aircraft. At the show, representatives stressed what they view as the JF-17's "capability at affordable cost".

The industry source stresses that marketing efforts for the type are shared equally between China and Pakistan, and notes that the aircraft is built in both countries. While he declined to provide a target number of orders, he did say that discussions are underway with "eight or nine countries".

"They have indicated rough numbers," he says. "Some want more, some want less."

Countries regarded as possible buyers include the Democratic Republic of Congo, Nigeria, Sri Lanka, Sudan, Venezuela and Turkey. Serbia is also reportedly considering the type for its fighter requirement.

Though the type's engine, the Klimov RD-93, is produced in Russia, the Pakistani official does not see this being an obstacle to sales because most prospective JF-17 customers have good relations with Russia.

"Doubt has never been cast on the aircraft's engine," he says.