It has been an extraordinary two years for Emirates since the aerospace world last gathered in its backyard for the biennial Dubai air show.

It has been an extraordinary two years for Emirates since the aerospace world last gathered in its backyard for the biennial Dubai air show.

Since the beginning of the previous show in November 2017, the Dubai flag carrier has placed orders and commitments for over 190 widebodies. But amid substitutions, programme terminations and renegotiations has actually ended this year’s Dubai show just 31 net orders ahead of where it was back in 2017. 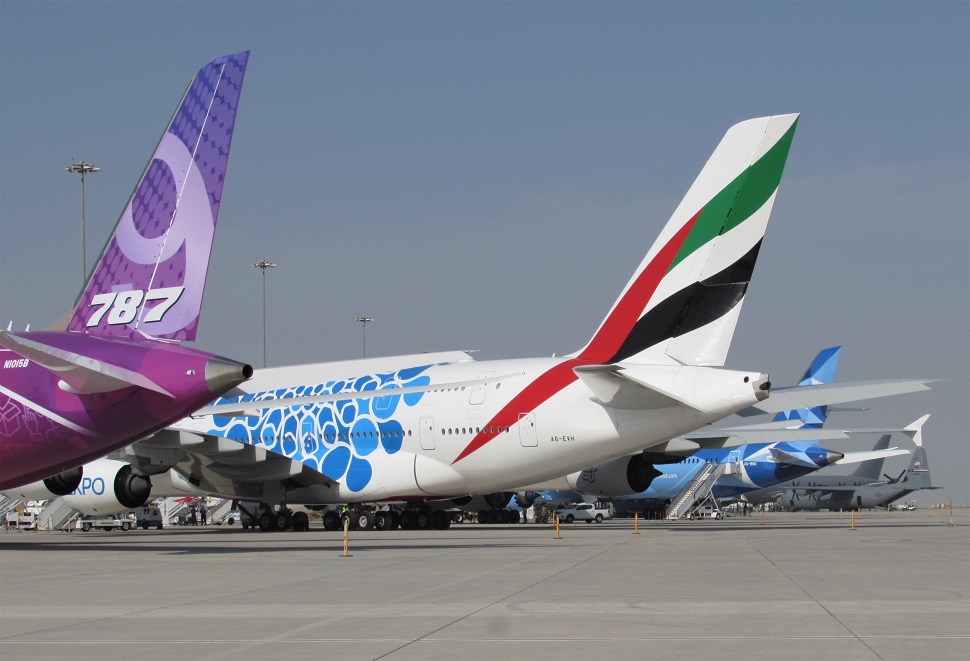 The background to this apparent fleet vacillation is linked to numerous factors, partly Emirates-related and partly due to issues beyond the airline’s control. But it all goes back to the middle of this decade, when Emirates had set course to operate a fleet of just two large widebody types – the Boeing 777-300ER (and its replacement, the 777-9) alongside a vast fleet of Airbus A380s. These two big widebody types would be supplemented by a small number of ultra-long-range 777-200LRs/777-8s for niche route sectors.

“When we signed for the 150 777Xs in November 2013, the idea was that the -300ERs would gradually disappear. At that point the A380 wasn’t under the sword of Damocles,” said Emirates Airline president Tim Clark earlier this week at the Dubai air show.

However, it then became apparent to the Emirates network and fleet-planning teams that the A380/777 fleet strategy could compromise the airline’s ability to maximise its global growth ambitions, says Clark.

“We thought there were some routes on the table which with those two big aircraft were looking unattractive commercially, but with a smaller widebody twin – ie A350 or 787, or both – would allow us to expand our business again. We see multiple new points coming into the network post 2023/24 where we will resurge our growth to take these on board.”

Cue the big commitment announced at the 2017 show for 40 Boeing 787-10s. This was a memorandum of understanding, and included the right to switch to the smaller 787-9. 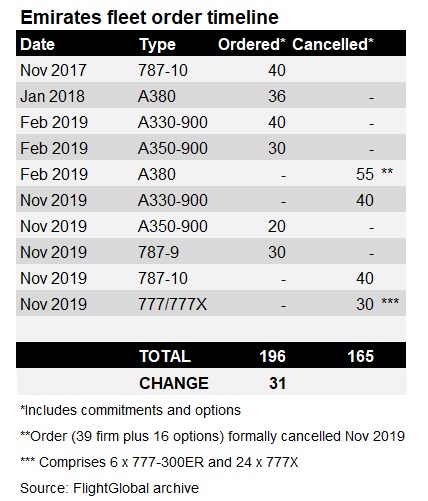 And that Boeing bonanza at the 2017 show was supposed to be mirrored by an A380 deal. But that fell flat when the two sides were unable to thrash out an agreement on further orders, a failure which became evident during a high-profile Emirates briefing during the air show.

But with the Emirates A380 top-up order crucial to future of the programme, Airbus’s chief salesman John Leahy – who was retirement-bound – was determined to get the deal done. So in January 2018, just two months after that failure in Dubai – Emirates signed for 20 more A380s (plus 16 options), throwing a lifeline to the superjumbo. When the A380 order was firmed up the following month it took the airline’s firm orders to 162 aircraft, all seemed to be set fair.

However, air shows came and went without the 787 MoU being firmed up and then on Valentine’s Day (14 February) 2019 Airbus dropped the bombshell that the A380 programme would be discontinued in 2021, with Emirates cutting back its orderbook to 123 aircraft. This meant that 39 orders were to be cancelled (along with the 16 options), replaced by a tentative agreement for 40 A330-900s and 30 A350-900s.

This deal for mid-sized widebodies from Airbus cast some doubt on the previously planned acquisition of the similarly-sized 787, given that over a year had passed and the Boeing MoU had still not been confirmed. When asked about the status of the Boeing 787 and 777X orders in September this year, Clark was unspecific about the airline’s plans given the uncertainty surrounding the latter’s development timetable and concerns over the former’s Rolls-Royce Trent 1000 engine reliability.

So as the industry congregated in Dubai this week there was much speculation around just exactly what would be announced by Emirates group chairman Sheikh Ahmed bin Saeed Al Maktoum at the show when the music finally stopped on negotiations.

And it was no surprise when there were a few final twists in the tale. The Airbus order had been revamped into a single deal for 50 A350-900s, while the 787 contract was firmed up at a lower number of 30 units for the smaller -9 platform.

Explaining the background to FlightGlobal in Dubai this week, Clark said he thought the A330neo was “a great aeroplane. But when all the planners got involved they thought the A350-900 would be a better bet than the A330-900. What I said was: ‘We leave it in the mix and see how that will work for us [in the future].’”

The decision to return to the A350 in such large numbers is significant, given that the airline was an early customer for both the -900 and the -1000 but decided to cancel its order in 2014. This was a decision, Clark says, driven by the fact the early aircraft were considerably over the weight target.

But Clark indicates there could be more business coming A350’s way if the delays to the 777X aren’t mitigated soon.

“The 777Xs were supposed to be coming next year – I’m not entirely sure when they’re going to come now,” he says.

“The question of the 777Xs will be determined by when they can deliver them to us. We have to keep our business going at a pace and if people fall by the wayside then we’ll have to plug the gaps. Does that mean the A350-1000 has to be looked at? Maybe it does.”

So Emirates could fully return to the Airbus programme it very publically abandoned five years ago: “Now we’ve taken the decision to go for the A350-900, the A350-1000 automatically falls into the frame,” says Clark.

What could come next in the fascinating evolution of Emirates’ fleet development is anyone’s guess. What is more certain is that the Dubai air show usually provides the most clues, but it is two years until the next one.