Potential customers for the Bell Boeing V-22 tiltrotor are being urged to take advantage of spare delivery slots, which will be available during the US government’s next five-year contract for the type.

The Department of Defense’s recently signed second multiyear procurement deal (MYP II) covers the planned manufacture of 100 V-22s for the US Marine Corps and US Air Force through the 2014 to 2019 fiscal years. 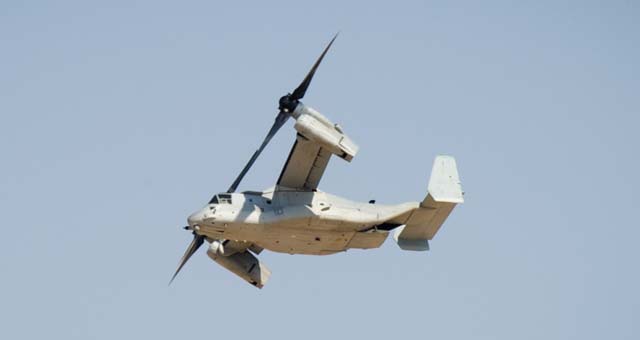 US defense secretary Chuck Hagel recently announced that Washington is to “expedite” the delivery of six V-22s to the Israeli air force, but Robinson declines to comment on the programme’s current status. Potential additional buyers are not being named, but he confirms: “I think we’ve got 18 or 19 [slots] left on the contract, and the capacity to add for whichever customer comes forward.”

Interest in the Middle East region is being shown in both the Osprey’s core military transport role, and also through its potential to receive a VIP cabin fit, Robinson says. He also hailed the USMC’s performance in deploying 12 MV-22s from Iwakuni in Japan to participate in humanitarian relief efforts mounted in the wake of Typhoon Haiyan, which devastated parts of the Philippines.

Meanwhile, the four MV-22s visiting the show this week completed a roughly 1,500nm (2,770km) self-deployment from a Marine Expeditionary Unit vessel off the coast of east Africa, each being refuelled three times in-flight. “That really demonstrates the versatility of this aircraft,” says Robinson, adding: “Since 2007, it has seen the full spectrum of operations.”