As Embraer’s KC-390 tanker-transport makes its international show debut, the Brazilian airframer and Boeing have strengthened their cooperation on the twinjet, which is seeking its first export success.

Advancing a relationship formed in 2012, the pact covers the joint marketing and in-service support by Boeing of the KC-390. One of Embraer’s two prototypes touched down at the show late last week, during an eight-nation tour which started in Portugal in early July. 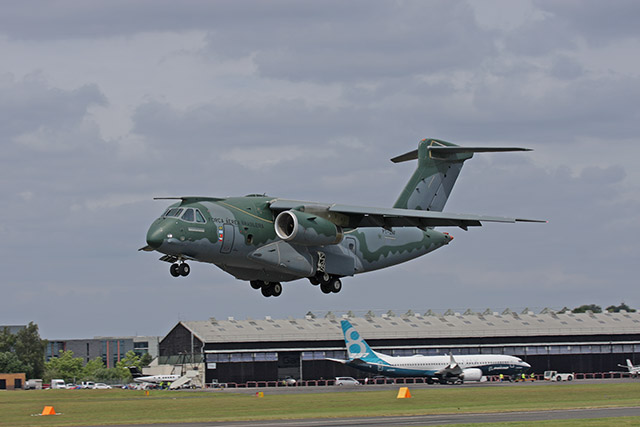 Ed Dolanski, president of Boeing Global Services and Support, says the agreement underscores the company’s “commitment to branch out beyond the traditional OEM role into services for non-Boeing aircraft”. The company late last year ended production of its C-17 strategic transport.

Embraer has brought aircraft PT-ZNF to the show, where it is appearing in the static display. First flown in February 2015, this and its sister prototype are “averaging two flights a day and proving high aircraft readiness”, says Embraer.

Brazil is so far the lone customer for the KC-390, with the service to receive 28 production examples. Embraer expects to secure type certification for the International Aero Engines V2500-powered type by the end of next year, with deliveries to start in the first half of 2018.

Speaking ahead of the show, Schneider revealed that the aircraft will also be visiting prospective customer nation the Czech Republic and other nations in Europe, the Middle East and Africa before returning to its flight-test campaign duties in Brazil.