What challenges do airlines face as they reintroduce Boeing 737 Max jets?

With the US Federal Aviation Administration’s long-awaited recertification of the Boeing 737 Max being swiftly followed by the same from Brazil’s ANAC, carriers in the Americas are preparing to reintroduce the narrowbody type to paying passengers.

In doing so, they will be forerunners for the reintroduction of 385 Max jets that were delivered globally to airlines before the grounding began in March 2019, and the 450 or so that are already built and ready for delivery.

Their experience will begin to show whether the challenges relating to the type’s return to service are surmountable, and how quickly – specifically regarding the logistics of reintroducing aircraft that have not seen commercial service for 20 months, and the impact of continued customer and employee concerns about the Max’s safety, alongside the potential toxicity of the Max brand.

Those answers will emerge in an industry unrecognisable from the one that existed when the grounding began.

Indeed, when airlines were forced to remove Max jets from their fleets in March 2019, the problem it created for many operators was one of insufficient capacity – immediately and in terms of planned future deliveries.

Today, the market could not look more different, with the crisis-hit industry forecast by IATA to achieve around 50% of 2019 capacity in 2021. 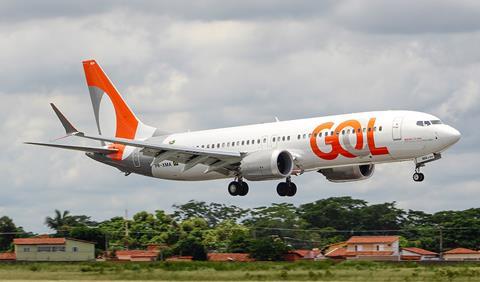 Despite the dreadful operating environment, however, the Max is still an attractive proposition to many airlines, who see value in the efficiency savings – and the sustainability effects – of a newer-generation aircraft. Unit cost savings will be particularly attractive in a market that is likely to see depressed yields for some time.

And in the USA and Brazil, large domestic markets give operators more options than most airlines have in terms of assigning capacity in the coming months.

So while Boeing has lost some 1,300 orders in the wake of the Max grounding, according to estimates from Cirium, and has agreed many delivery deferrals since the Covid-19 pandemic hit, there are still plenty of airlines aiming to introduce or reintroduce Max jets to their fleets in the coming months and years – albeit the majority will be for replacement, rather than growth.

Aside from the jets already with airlines when the grounding began, in the next year Boeing says it expects to deliver around half of the 450 Max aircraft that are in its inventory.

In the short term, carriers in key markets such as Canada, China and Europe face a longer wait for the nod to bring their Max jets back into service, with regulators still to rescind the ban on the type flying commercially as December began.

But of the airlines covered by the FAA and ANAC recertification decisions, some are looking to fly passengers on the Max before the year is out.

Before welcoming customers back on to the type, however, those airlines face a significant task in readying the aircraft for service.

Among a list of required steps, they must ensure mandated changes are made to the aircraft’s software and that pilots have completed new training relating to the narrowbody’s Maneuvering Characteristics Augmentation System (MCAS). The jets will also have several other alternations, such as changes to horizontal stabiliser wires to comply with the latest FAA regulations. Standard procedures for the return of aircraft after prolonged groundings will also need to be followed.

With some of that work already under way before the FAA announcement, American Airlines – which had 24 Max jets in service in March 2019 – is eyeing the completion of the process sooner than most of its US peers, having announced plans to start Max services on its Miami-New York LaGuardia route on 29 December.

“We are taking a phased approach to return the aircraft to service,” wrote American chief executive Doug Parker in a note to employees. “We will begin with non-commercial flights in early December before the official return to service date to demonstrate that the 737 Max is as safe as every plane we fly at American.”

It is planning to gradually phase more of the type into its schedule as 2021 gets under way.

Brazilian low-cost carrier Gol, however is on track to reintroduce the Max ahead of American, with flights set to begin in mid-December.

United Airlines, meanwhile, says it aims to bring the aircraft back into service during the first quarter of 2021.

“United’s Max fleet won’t return to service until we have completed more than 1,000h of work on every aircraft, including FAA-mandated changes to the flight software, additional pilot training, multiple test flights and meticulous technical analysis to ensure the planes are ready to fly,” the airline says.

It had 14 Max jets in service at the time of the global grounding.

The largest operator of Max jets at the time of the global grounding is likely to take even longer to return the type to its fleet: Southwest Airlines plans to return stored aircraft to scheduled flights from April 2021. 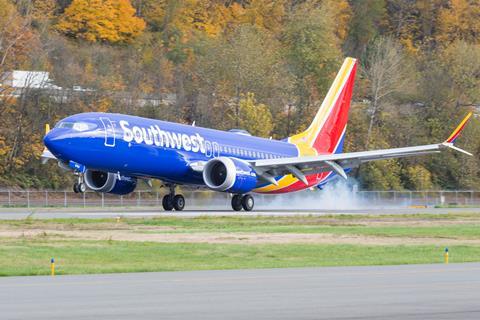 Southwest is adding Max jets to its April 2021 schedule

The low-cost carrier estimates it will take about 135 days for the aircraft to go from storage to revenue service-ready, said Landon Nitschke, the airline’s senior vice-president of technical operations, in November.

In announcing its roll-out plan, Southwest also addressed perhaps the biggest unknown of the Max’s return to service: how many passengers will refuse to fly on the type, despite the rigorous safety oversight now in place.

Southwest believes a “minority” of passengers will opt not to travel on the aircraft.

“We bought the 737 Max 8 and we are proud of the 737 Max 8,” says Southwest president Tom Nealon. “It’s been through more evaluation and oversight than you can imagine.”

Nevertheless, Southwest is not alone in acknowledging that processes will be in place to allow passengers nervous about travelling on the Max to book on to other flights.

A statement released by American on 18 November says: “Our customers will be able to easily identify whether they are travelling on [on a Max] even if schedules change. If a customer prefers to not fly on this aircraft, we’ll provide flexibility to ensure they can be easily re-accommodated.”

Meanwhile, speaking back in November 2019, then-United chief executive Oscar Munoz stated: “We are going to make it very transparent to our customers [that their trip is on a Max]. If they are not happy, we will offer to rebook them, even if they take that decision at the gate.

“We don’t assume everybody will jump back on the aircraft.”

Indeed, the Max crashes and consequent travails around the programme penetrated well beyond industry circles and into the public consciousness.

While an average airline passenger might not care whether they are flying on a 737 or Airbus A320, the one question they might want answered is whether or not their aircraft is a Max.

Therefore, no matter how many times Boeing chief executive David Calhoun points out that the Max crisis “reshaped our company and further focused our attention on our core values of safety, quality and integrity”, it remains to be seen whether the reputational damage will endure – for some travellers, at least.

The same might go for FAA administrator Steve Dickson’s insistence that he is “100% comfortable with my family flying on [the Max]. The travelling public deserves and expects nothing less”.

Airlines have also acknowledged that employees need to be convinced of the Max’s safety.

Helpfully, pilot unions in the USA have expressed support for the type’s return to service.

And other carriers are likely to follow American Airlines in offering ‘flights to nowhere’ for staff before the restart of commercial passenger services, “to ensure our own team members are comfortable”.

A related uncertainty surrounding the Max is whether the branding itself is tarnished to the extent that it needs to be changed.

In some ways, that debate is moot. A Max is a Max, and there might be dangers in being seen to “cover up” the type of aircraft passengers are boarding.

Southwest’s Nealon, for example, believes little would be gained from changing the Max branding in the short term.

“You can try to change the branding but we are proud of what we are flying,” he states. “Over time that could certainly evolve, but our intent is not to change the name.”

But it is also difficult to ignore the fact that industry heavyweights such as Air Lease’s Steven Udvar-Hazy and Qatar Airways chief executive Akbar Al Baker have previously suggested a rebrand would be wise.

Either way, airlines will soon begin to discover the extent to which any reticence to fly on Max aircraft will affect booking patterns, and for how long that might last.

Ultimately, amid the challenges around the type’s return to service, the coming months will see airlines, regulators and Boeing working hard to ensure that once the jets are in the air again an impeccable safety record is achieved, bolstered by a unified effort to educate and reassure passengers.

A lot of reputations are at stake.