JetBlue Airways has revealed more details about its transcontinental premium product and announces it will install new economy seats and a updated entertainment system on incoming Airbus A321 aircraft. 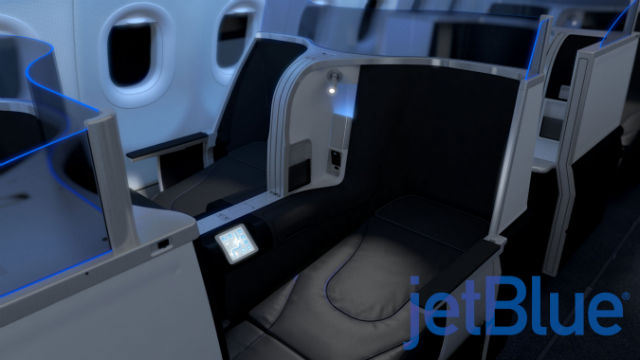 New York-based JetBlue announced earlier this year that it would create the premium product in order to attract more high-yield passengers on the popular transcontinental routes.

Though JetBlue will receive the first of its A321s later this year, the lie-flat seats will be installed on aircraft arriving in 2014.

In rows one, three and five, the airline will install the lie-flat seats in a two-by-two configuration, says JetBlue.

But in rows two and four the airline will have private suites with closing doors. Those rows will have one seat enclosed in a suite on each side of the aircraft, says JetBlue.

When JetBlue introduces the new product in the second quarter of next year it will be the only airline offering customers a private suite in the transcontinental market, JetBlue says.

The airline says in a 4 August internal employee memo obtained by Flightglobal that it will "reinvent" the premium transcontinental flying experience.

"These routes have razor-thin margins, and it is becoming harder to compete with airlines that can subsidise their economy cabins with first-class sales, " writes Hayes.

"I'm confident we've succeeded in creating a uniquely JetBlue experience that will not just attract fliers from other airlines, but create a new breed of premium customers," says Hayes, adding that the lie-flat seats will extend to 6.7 feet (203cm).

The lie flat seats will have "air cushions," a "massage function" and adjustable firmness, and the premium product will have a 15-inch television, JetBlue says.

In addition, JetBlue says it will refresh its economy product in 2014 with slimmer seats with moveable headrests, a new entertainment system with 10.1 inch televisions and USB power ports accessible to all customers.

The airline adds that it will increase its service between JFK and Los Angeles and San Francisco next year and will dedicate 11 aircraft to the routes.