In an environment where a rebound in travel to pre-crisis levels in most international markets is off the horizon until next summer or beyond, the speed and scale of the recovery in the US-Mexican market is a stand-out.

Cirium schedules data shows that by May this year, seat capacity on routes between the USA and Mexico was already outstripping pre-crisis levels. That came just a year after the nadir of the crisis, when available seats in the market dropped from a little over 3 million in May 2019 to just 330,000.

This trend has continued despite the spread of the Delta variant of Covid-19 in the region, which caused US carriers to dampen some of their early year recovery hopes, and the FAA’s downgrading of Mexico’s safety status to Category 2 under the International Aviation Safety Assessment (IASA) programme.

Cirium schedules data for October shows capacity in the US-Mexican market is some 30% above pre-crisis levels. 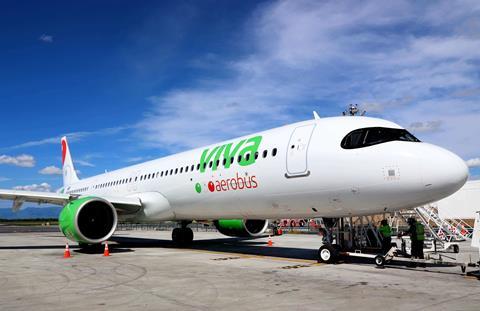 VivaAerobus is now operating 18 routes to the USA, compared to six in October 2019

Of the 14 airlines serving the cross-border market in October 2019, all but two are showing an at least double-digit percentage increase in capacity this month by comparison. The only exceptions are US leisure carrier Sun Country Airlines, which has cut capacity on its Mexican routes, and grounded Mexican budget airline Interjet.

Low-cost segment operators have been particularly prominent in growing their footprint on cross-border routes.

Volaris, the biggest low-cost and third largest operator in the market overall, has lifted its seat capacity by 28%. It is flying more than 100,000 seats in October compared with the same month in 2019.

But leading the pack in growth in the market is Mexican carrier VivaAerobus. It was offering 56,000 seats on US-Mexico routes in October 2019. That now stands at over 230,000, making it the sixth biggest player in the market.

VivaAerobus has been among the most aggressive in returning capacity since the pandemic. Last November it laid claim to being first airline in the Americas to return to 100% of its pre-crisis capacity.

While at the point of the Mexican safety downgrade in May, VivaAerobus stressed that the US routes comprised only 14% of its overall capacity, Cirium schedules data shows its expansion into the US market has seen it add a dozen new routes since October 2019. The majority of these new routes were added over the winter and connect to points in bordering Texas, namely Dallas/Fort Worth, Harlingen, Houston and San Antonio.

Cirium schedules data show that Mexico City-Houston, one of the new VivaAerobus routes, has overtaken Mexico City-Los Angeles as the biggest route by seat capacity. Volaris has also started on the route, the two Mexican carriers moving into the space vacated by Interjet since its grounding at the end of 2020.

But much of the additional cross-border capacity increases have been focused on Mexican resort Cancun. Capacity has, for example, more than trebled on Newark-Cancun flights, as United Airlines has doubled its frequency and been joined on the route by new entrants Frontier and JetBlue.

Indeed, it is US carriers that have driven the 76% increase in seat capacity this October compared with 2019 on US-Cancun routes. Frontier, JetBlue and Spirit have all significantly lifted capacity on Cancun routes, while the US majors have expanded off a high base.

By contrast VivaAerobus, which operates a single service to Cincinnati, is the only Mexican operator on Cancun-US routes, accounting for less than 1% of overall seat capacity between the two.