Which commercial airlines served Kabul before the Taliban advance?

By 20 August, passenger airlines including Air Arabia, Emirates, Flydubai and Turkish Airlines had confirmed the suspension of scheduled operations to Kabul, following NOTAMs that the region’s airspace would be “uncontrolled” and the civilian side of the airport closed. While flight-tracking services suggest that commercial operations are still scheduled at the airport, there is no confirmation that any flights are taking place, even for local carriers on domestic routes.

Of the 1,272 flights touching the airport during July, around half were operated by local private carrier Kam Air – whose Airbus A340 featured heavily in images of panic at Kabul’s airport – with nearly 250 flown by Afghan government-owned Ariana.

Aside from a number of domestic flights, Kam Air’s network featured Ankara, Delhi, Dushanbe, Islamabad, Kuwait City, Medina and Tashkent, according to Cirium data. Its A340s were most often used on services to Delhi and Medina.

Of the international carriers, Flydubai was operating into Kabul twice-daily (although its services dropped to daily towards the end of July), while Turkish Airlines flew a mixture of daily and twice-daily services. Emirates was operating daily into the airport, as was Air Arabia (although, like Flydubai, it cut services towards the end of July), with Air India and PIA each operating several flights per week.

The slate of carriers serving Kabul had been largely unchanged in recent years, Cirium data shows, with the only significant developments being Indian low-cost carrier SpiceJet stopping regular services to the airport at the end of 2020, and Iranian carrier Mahan Air stopping services in early 2019.

Unusually in an industry that has seen connectivity devastated by the Covid-19 crisis, airline capacity into Kabul had held up amid the Covid-19 pandemic, with flight numbers this year largely flat with 2019 levels. 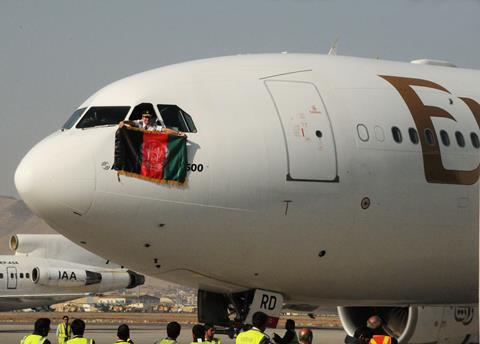 In terms of international flights from other Afghan airports, Cirium data indicates that Kam Air was serving Delhi and Istanbul from Mazar-i-Sharif in July, while Ariana operated from Kandahar to Dubai and Jeddah, and from Mazar-i-Sharif to Moscow Sheremetyevo.