What does fuel price volatility mean for airline strategies

When on 8 March the US announced a ban on Russian oil and other energy imports in retaliation for the invasion of Ukraine the price of Brent Crude oil surpassed US$139 per barrel to reach a 10-year high.

Subsequent sharp price movement – which has seen it fall below the $100 mark and then climb back up again - underlines that oil supply conversations, as well as its price, are likely to remain volatile and speculative at times, at least for the next couple of months if not more. 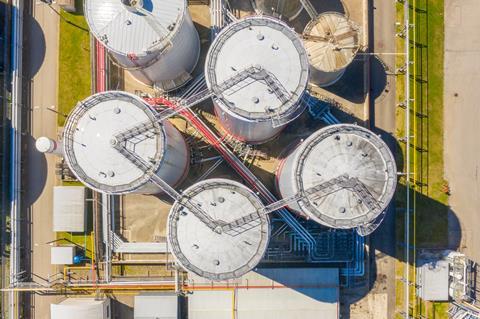 Forecasting crude oil prices in normal times is a daunting task as inventories, supply and demand in addition to other “external’ and uncontrollable variables such as conflicts are difficult to predict. Today, I am observing at least 20 additional variables and many “what if scenarios” that need to be considered to forecast oil prices. Notably these include:

Furthermore, reduced global air travel demand - as still being seen in some long-haul markets - has an impact on production of refined goods such as the jet fuel product. In fact, weaker travel demand means lower production attractiveness (when compared to other oil products and derivatives) associated with lower returns on investment.

For the third quarter average jet fuel prices could range from $165 p./bbl up to $225 p./bbl if tensions between Russia and Ukraine escalate further. 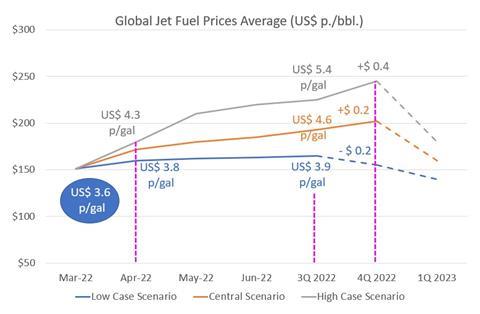 Fuel costs typically represent around a third of an airline’s total annual expenditure, making it central to its financial performance. To mitigate short to medium term jet fuel price volatility while protecting liquidity and the bottom line, airlines can proactively use swaps, futures and call options to hedge their fuel needs from three up to 18 months. Not having fuel insurance in place for higher oil prices at this time means that it will be expensive to have one going forward.

Implementing a fuel surcharge is another option, though in terms of rebuilding demand following the pandemic, the question is how demand and the competition may respond to fuel surcharges and what percentage can be passed onto customers through higher fares. The ability to do so will also depend on competitive factors. For example, a full-service carrier may struggle to do so if it operates in a market where an ultra-low-cost carrier has high penetration.

Given airline profitability is so closely tied to fuel prices, containing CASM before fuel expenditure becomes more important than ever. Fleet simplification, staff reduction and other cost reduction measures have a role to play.

Moreover, capacity discipline and optimizing load factors will also be key during this new “higher unit cost times”. As observed by load factors especially on transatlantic routes, excess capacity is currently an issue in the industry - especially as many network carriers are rebuilding networks and schedules to fight back strong ULCC competition and penetration.

Passengers should expect fewer discounted fares going forward. With oil prices reaching highest levels in the last 10 years, airline profitability is more than ever under pressure, margins are being squeezed like never before and senior airline management need to be careful plan how to tackle the new higher unit cost challenge.