The UK Royal Navy’s first new aircraft carrier has been formally named the HMS Queen Elizabeth, during a ceremony at Rosyth dockyard near Edinburgh, Scotland.

Performed on 4 July by Her Majesty Queen Elizabeth II, the milestone marks the completion of the lead vessel’s 65,000t structure, with the Aircraft Carrier Alliance also having started the flood-up of its dry dock before the ship will be floated out later this month.

First Sea Lord Adm Sir George Zambellas says the new carrier’s role “will be global, strategic and one of inter-service and international partnership.” Current plans call for the Queen Elizabeth to be in use for 50 years, he adds.

With the RN currently without any fixed-wing carrier-based aircraft, the event included a flypast by the Royal Air Force's Red Arrows aerobatic display team, several of the UK's current military helicopter types, and three BAE Systems Hawk T1s. A planned appearance by classic Fleet Air Arm types including a de Havilland Sea Vixen and Supermarine Seafire fell foul of a low cloud base.

An aspiration to have a Lockheed Martin F-35B Joint Strike Fighter participate was also thwarted, since the three examples due to visit the UK for the first time to appear at the Royal International Air Tattoo and Farnborough International Airshow later this month have yet to leave the USA.

Lockheed says the two US Marine Corps aircraft and one UK example, which are now at NAS Patuxent River in Maryland, are “well within the arrival window” to participate in both shows. They had been due to begin their Atlantic crossing earlier this week, supporting by a USMC KC-130J tanker.

Attendees at the naming event were, however, able to see a full-scale replica of the short take-off and vertical landing type positioned at the top of the carrier’s “ski-jump” ramp. This combination will next come together during embarked sea trials which are due to take place off the east coast of the USA in the fourth quarter of 2018. 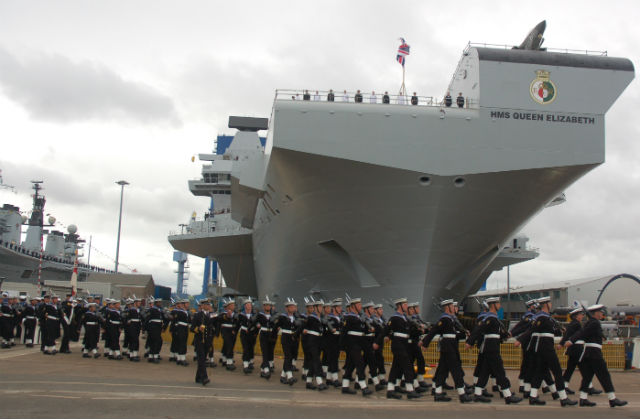 The ceremony was conducted with the RN’s lone remaining Invincible-class carrier HMS Illustrious (below) docked alongside its replacement. The 22,000t vessel is due to be retired from use later this year, with the recently refitted HMS Ocean to provide a helicopter carrier capability until its successor is available for operational use.

A decision on whether to bring second-of-class carrier HMS Prince of Wales into service will be made as part of the UK’s 2015 Strategic Defence and Security Review process. Defence secretary Philip Hammond again showed his support for adding the vessel to the RN fleet, noting that a decision will be a trade-off between "strategic capability, and cost". Its bow section is already alongside the Queen Elizabeth in Rosyth, ready to be placed into dry dock after the lead ship is moved. 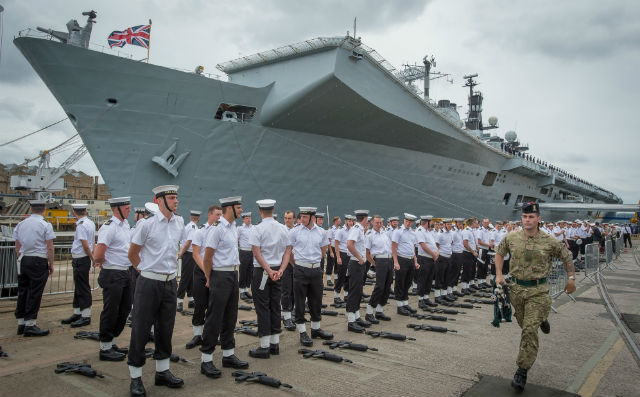 Acquired via the CVF programme, the new carrier is the largest warship ever produced in the UK. It will be able to operate with an embarked air wing of up to 40 aircraft, including F-35Bs, AgustaWestland Merlin HM2 multi-mission helicopters and future airborne early warning examples of the latter type, to be provided via the Crowsnest programme.

Other types expected to operate from the ship include British Army Boeing/AgustaWestland Apache AH1 attack helicopters, RAF Boeing CH-47 Chinook transports and RN Merlin HC4 amphibious support helicopters, with the latter to be flown by the Commando Helicopter Force.

Meanwhile, the UK Ministry of Defence is expected to soon confirm its first production order for the F-35B. Four examples have already been acquired for almost £1 billion ($1.71 billion) to support initial operational test and evaluation and training activities in the USA. Its pending order will be for an initial batch of 14 aircraft.