The huge reduction in emissions from commercial airlines in 2020 paradoxically highlights the scale of the challenge ahead for the industry to meet its sustainability targets, according to IATA’s director of aviation environment, Michael Gill.

In a year that has seen connectivity devastated by the coronavirus pandemic, overall CO2 emissions will still be higher than the industry’s target level for 2050, Gill tells FlightGlobal ahead of IATA’s AGM on 24 November.

“I don’t want to be unduly negative,” he states. “It’s really to give an idea of the order of magnitude that we’re dealing with.

“This year, even in the midst of the worst crisis, with 50% less traffic, we’re not down to 325 million tonnes [of CO2 emitted],” he explains, referring to the global industry’s long-term objective to reduce emissions to half of 2005 levels by 2050. 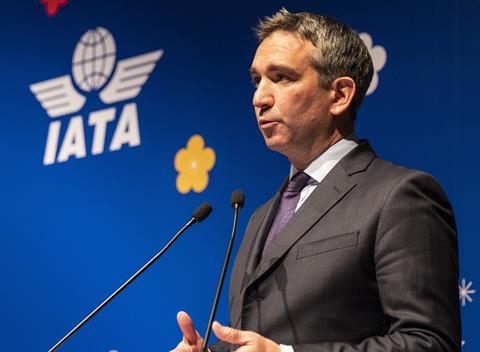 Gill says the crisis has impacted traffic forecasts through to 2050

Crucially, with ATAG’s latest projection of a 3% compound annual growth rate in airline traffic through to 2050 – and demand expected to be back at 2019 levels within a few years – an absolute reduction in CO2 emissions still needs to be achieved amid much more air travel.

It is therefore no surprise that of the two resolutions planned for this year’s stripped-down IATA AGM, one will reaffirm the industry’s commitment to its environmental targets – an issue that had shot up the airline agenda pre-pandemic.

The crisis has “really focused peoples’ minds on our long-term objectives and the goals we set”, Gill remarks.

Among IATA’s top priorities, it aims to promote the role that sustainable aviation fuels (SAF) could play in achieving sustainability targets, and the need for government support to drive that agenda.

SAF is part of a suite of measures the industry is counting on to meet its targets, which also includes advancements in technology – notably in aircraft design – alongside operational and infrastructure improvements, all underpinned by ICAO’s CORSIA emissions offset scheme.

At the same time, Gill states that IATA is “actively looking at the pathways that could take the industry to an even more ambitious objective, to a net-zero emissions future, and that will come out of the AGM discussions”.

Helpfully, perhaps, the current crisis is having an impact on long-term emissions growth.

“The impact has been so great, we still think it’s going to have a knock-on effect on our emissions even out to 2050, because the emissions then are forecast to be about 16% less than we had thought they were pre-Covid,” Gill says.

ATAG released a revised outlook in late September, showing that it expects the aviation sector to be transporting around 10 billion passengers a year by 2050 – more than twice 2019 levels, but 16% down on previous forecasts

“So, yes, there’s going to be a recovery, but the impacts of Covid as far as emissions are concerned are going to be felt for some time,” Gill observes.

WILL STRUGGLING AIRLINES STILL FOCUS ON THE ENVIRONMENT?

Amid that unplanned – and relatively minor – moderating of the sector’s impact, is there an immediate danger that debt-laden airlines emerge from the crisis without the resources or time to focus on sustainability?

“For some carriers it may have some short-term impact,” Gill says, citing delayed fleet-renewal programmes and a reduced ability to invest in SAF – particularly if they cannot access the fuel “at more or less parity” with traditional jet fuel in cost terms.

But sustainability is an “unavoidable” issue for airlines, Gill says.

And, if anything, the crisis has intensified the focus on the industry.

He highlights how government bailouts of some carriers carry conditions around reducing the environmental impact of their operations.

At the same time, ”we’re hearing from passengers that the environment is going to be one of the key questions they consider” before booking a flight.

Crucially, “people have got used to not flying” during the crisis, and may see “some benefits” to that, Gill states.

Such considerations make it more important than ever that the industry gets its response right, he says.

WHAT IS IATA’S MESSAGE TO GRETA THUNBERG?

Indeed, with movements such ’flygskam’, or ’flight shame’, and high profile figures such as Greta Thunberg attracting support – particularly among younger generations – the scrutiny of the industry is only likely to become more intense.

Asked what his message would be to those advocating that people fly less, Gill says engagement is the starting point.

“Coming from an association’s perspective it would be: engage with us, come and talk to us,” he states. “We have a clear and a credible story to tell, we recognise that others are challenging us and others have different views.”

So far, the dialogue has only been in one direction, he notes.

“We haven’t yet seen a genuine effort coming from the anti-aviation movement to really sit and talk with the aviation sector, try and understand the particular constraints we have, and try and understand what we’re trying to do to address those challenges,” Gill says.

“The door’s open. Come and speak to us.”