As the global airline industry prepares to head to Doha for this year’s IATA AGM, the chief executive of host Qatar Airways has a compelling story to tell about his carrier’s efforts to keep the world connected over the past two years

Some five years ago, the 2017 IATA AGM in Cancun was a memorable one for Qatar Airways chief executive Akbar Al Baker – but not because of goings on at the event.

As the gathering began on the Sunday, so too did a blockade of Qatar by its near neighbours, prompting Al Baker to make a speedy return home from Mexico.

In 2022, as the airline celebrates its 25th anniversary, Qatar Airways is hosting the latest IATA AGM on 19-21 June, having seen the back of that regional challenge in early 2021 and proved its mettle during the global turmoil of the past two years.

Indeed, not only did the Oneworld carrier survive the blockade, it is also emerging from the Covid-19 pandemic with its reputation enhanced on the global stage, Al Baker explained during the mid-May Arabian Travel Market event.

“When it came to the pandemic, the blockade experience [was helpful] and we took the challenge of not stopping our airline or shutting our airport,” he recalls.

“The important thing we did was to take people home when… passengers [were] stranded all over the world.

“Qatar Airways went to their aid, and we were immensely recognised by many countries for helping their citizens.” 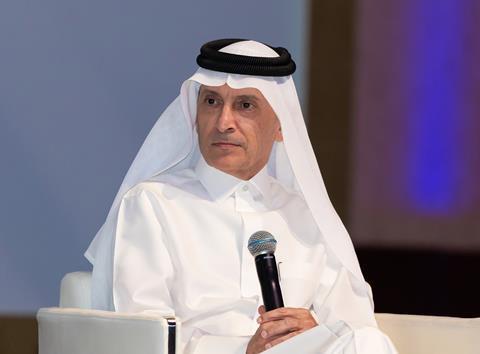 Today, the airline is back up to around 140 destinations – from a low of 30 at the height of the pandemic – and believes that its decision to “serve humanity” over the past two years puts it in good stead for the future.

“Several million people travelled for the first time on Qatar Airways, and this was a huge marketing benefit for us, because they saw the product,” Al Baker states.

“Today, we have established our brand as an airline that is there for its passengers… [and] we did a lot of things to let the people know that Qatar Airways is with them in good times and in bad times.”

Helping it through the past two years, the airline also doubled-down on cargo, using its dedicated freighters and passenger aircraft to meet rising demand.

“We found a way to use grounded aircraft to transport cargo because there was suddenly a huge demand for medical supplies, transportations of critical medical equipment, food, and so on,” Al Baker explains.

Remarkably, given the state of the wider industry, Al Baker says that the year to 31 March 2022 “has been the strongest in the history of Qatar Airways”, with “very handsome” financial results reported for the period.

“What is important for us is we showed how resilient the airline is, how flexible the airline is and that we are not going to slow down or shrink the company,” he says.

“We will take every single opportunity we get to expand our business.”

That is not to say Al Baker is complacent about the challenges faced by his airline and the wider industry.

While he expects demand to have rebounded to pre-Covid levels “by 2024, maybe 2025”, Al Baker insists that “we always have to keep our guard – we need to keep our fingers crossed”.

He observes that even though Covid-19 is on its way to becoming endemic, “it is still there”, with uncertainty regarding the impact of the next major mutation of the disease.

“We hope that there will not be another mutation similar to Omicron, and that the business will come back,” he states.

Inflation is another reason for caution regarding the outlook.

“The inflation that is happening around the world because of commodities, because of supply chain [disruption]… this is all a vicious circle,” Al Baker says.

“I hope I am wrong, but we need to be prepared, we need to be on our guard to anything that could happen over the next 12-24 months.”

The conflict in Ukraine is also a development that needs to be closely watched.

“We also don’t know if this conflict will go beyond the borders of Ukraine,” Al Baker states.

Citing the loss of “innocent life”, he expresses hope that there will be a resolution to the war and that the impact on the airline industry will not be deeper than that already seen.

A further challenge unique to Qatar Airways is the grounding of more than half of its Airbus A350 fleet over paint-degradation concerns.

As a related court case continues, the airline is back operating some of the Airbus A380s that had looked destined for the boneyard for much of the past two years.

“We are so desperate for capacity to fuel the huge growth in passenger numbers the airline is facing in this period,” Al Baker says.

Amid that recovery, Al Baker is able to look back on his 25 years leading an airline that, by his own admission, is “prone to challenges”.

But while he expresses frustration over “the government restrictions and regulations that restrict the right of airlines to serve the public in [some] jurisdictions”, Al Baker ultimately has a sense of pride over what he has achieved in Doha – often against the odds.

“My happiest moment in this 25 years is that I have delivered to my country what was expected of me: to have the best airline in world,” he states. “And at the same time we have the best airport in the world now.”