Rising costs may threaten US majors’ profit margins in 2020

Consumer confidence in the US economy and a declining unemployment rate drove demand for air travel in 2019. That was good news for the four major US carriers, but for three of them there was the question of whether they would have the aircraft to meet that rising demand.

As the calendar turns to 2020, it remains unclear how capacity will be introduced next year.

Profits are there for the taking in 2020, but, Delta Air Lines aside, rising costs from the continuing cancellation of Boeing 737 Max flights and – in at least one of the US major’s cases – labour issues are threatening to narrow profit margins next year.

WHAT AMERICAN AIRLINES CAN AND CAN’T CONTROL

If conflicts with its mechanics’ union and delays in the recertification the Max extend deeply into the first half of 2020, then American Airlines will likely face higher ex-fuel unit cost and reduced unit revenue. 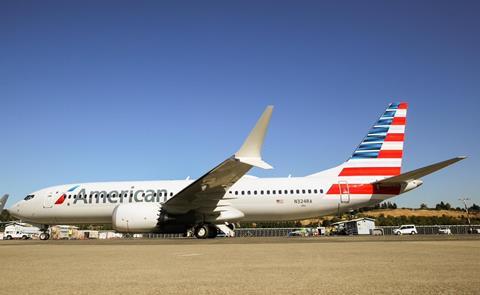 These two big “ifs” aside, management expects to generate $5.5 billion in free cash flow over the next two years as the airline’s long-term fleet investment begins to bear fruit.

“American has the worst balance sheet among the big three US airlines, but it has re-fleeted itself,” says Cowen analyst Helane Becker. ”Delta and United are just re-fleeting now. Things are going well with American with the exceptions of the Max and the mechanics’ unions.”

The Dallas-based carrier has completed its six-year $31 billion fleet investment, but a sizeable portion of young aircraft are in storage or mired in delivery delays caused by the Max grounding.

The airline has removed the Max from its schedule through 6 April.

American estimates a $140 million loss of net income from Max flight cancellations for the third quarter and a $540 million full-year loss.

“We’ve gone through that investment cycle,” said American Airlines president Robert Isom at a Wings Club lunch in New York last month. “We have to get those aircraft back – when they’re safe. When we do that it will really put us on a path to producing a lot of free cash flow.”

Meanwhile, American is negotiating with members of the Transport Workers Union (TWU) and the International Association of Machinists and Aerospace Workers (IAM). Earlier this year, the airline sued TWU and IAM over work slowdowns that eventually led to hundreds of cancelled flights. A July federal court ruling required the unions to maintain productivity at 2018 levels.

During American’s third-quarter earnings call on 24 October, chief executive Doug Parker said – perhaps with some relief – that while he did not want to jeopardise negotiations by prognosticating when agreements might come, he is “happy” to be at the negotiating table.

Parker said during the call that the 2019 twin headwinds of the Max grounding and labour conflict “should not be headwinds next year”.

The US Federal Aviation Administration’s recertification of the Max is completely out of American’s hands, which is not the case with labour negotiations. The disheartening regularity ­– from the airlines’s perspective – of delays in the Max’s return to service could give American more incentive to come to terms with TWU and IAM.

“The mechanics issue is bigger for American than the Max,” Becker says. “Operations have been hurt by its contentious relationship with its mechanics’ unions.”

American’s ex-fuel unit cost was up 5% in the third quarter. Unit revenue increased 3%.

During the third-quarter earnings call, Parker acknowledged a widening of the unit revenue gap between American and Delta in the last six quarters. “We should be narrowing that gap, not widening it.”

Skill and compromise at the bargaining table early in 2020, plus the safe return of the Max in the first half of the year, might give American the operational turnaround it needs.

Like other US majors, Delta Air Lines profited in 2019 from a strong and growing domestic economy. But unlike other US majors, Atlanta-based Delta is not a Max customer. It therefore didn’t suffer the attendant operational complications, flight cancellations, serial schedule revisions and executive-suite stress caused by helpless dependence on decisions made by the FAA, overseas regulators, the US Congress and Boeing’s leadership. 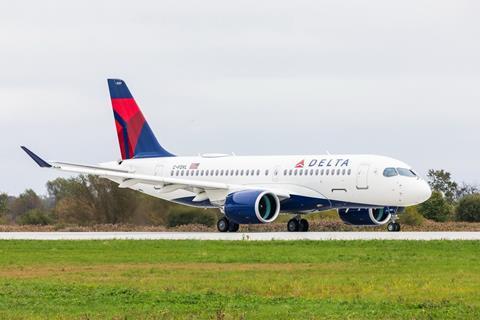 Delta’s domestic business performance in 2019 could hardly have impressed analysts more. Barring a sudden economic downturn in the USA, the only significant obstacles to overall margin growth for Delta in 2020 appear to be costs associated with its new joint ventures with Chile-based LATAM Airlines and with Air France-KLM and Virgin Atlantic in Europe, low margins in international markets because of trade tensions and the strong US dollar and, perversely, the return of the Max to its US competitors’ fleets.

Delta also avoided in 2019 the labour-relations strife that plagued American Airlines. Except for its pilots, Delta is a non-union airline. Employees have consistently chosen profit sharing and pay increases over union membership.

Analysts expressed concern during the investor day call that the comparatively low margin in Delta’s international market could be a drag on overall profit margin in 2020. Chief executive Ed Bastian and president Glen Hauenstein suggested that even if that were true in the short term, the long-term payoff from both its 20% stake in LATAM and joint venture with Air France-KLM and Virgin Atlantic ­– approved in November by the US Department of Transportation – should be recognised.

Hauenstein said that once the US dollar peaks and international trade issues get resolved Delta would “see significant upside in the international arena”.

Bastian added that Delta’s emerging global diversity will enable the airline to “play all sides of [domestic and international cycles] and move the airplanes around to where we’re generating the highest margins”.

Investments in its fleet lie ahead. The average age of Delta’s fleet of 943 aircraft is 15.4 years, Cirium fleets data shows. By comparison, the average age of United’s fleet is 15 years and American’s 11.4 years.

Delta expects its operational prowess to see it through the retirement of its 71 Boeing MD-88s and 33 MD-90s.

“Despite having one of the oldest fleets in the business we actually deliver the industry’s best reliability at the lowest maintenance cost with the highest net promoter scores, defying conventional wisdom that fleet age is the bellwether for the company’s success,” said chief financial officer Paul Jacobson during a 7 November presentation at the Baird Industrial Conference in Chicago.

Hauenstein admitted on 12 December that the presumed reintroduction of the Max to US competitors’ schedules in 2020 would lead to some “flow pressure” in the domestic market, but downplayed its potential effects on Delta’s business. “Generally [the Max is] not going to places that are of key importance to us.”

UNITED MANAGES MAX DELAYS AND CUTS A DEAL WITH AIRBUS

United Airlines spent much of 2019 dealing with flight cancellations and related cost increases from the grounding of its 14-strong Max fleet and the absence of 15 additional Max jets that were to be delivered this year.

United, which has not disclosed a figure for lost revenue from cancelled flights, has removed the Max from its schedule through 4 June. 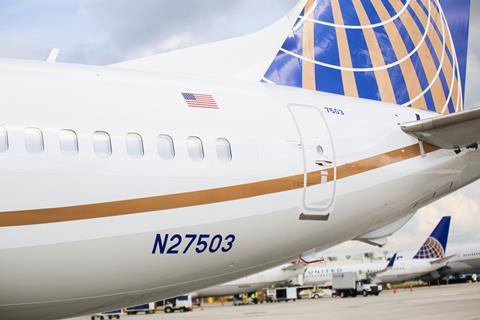 Still, the Chicago-based airline closed out the year on an up note with a significant order that put it on more solid footing as it awaits the fate of its 144 on-order Max jets.

United has earmarked the A321XLR to replace its fleet of aging Boeing 757s and won’t begin taking delivery until 2024, but in voting with its investment dollars for the Airbus aircraft’s versatility, fuel efficiency and payload capabilities, the airline has sent a signal to investors that it’s not waiting around for Boeing to fix the Max and finally shift its attention to developing its proposed New Mid-market Airplane (NMA).

However, beyond building investor confidence in United’s executive team – which will be led, from May, by current president Scott Kirby, who succeeds chief executive Oscar Munoz ­– the A321XLR order won’t ease pressure on margins in 2020 in the face of Max delays.

To do that, United will have to once again “sweat its assets and stretch its flying day” – that is, with the Max jets grounded, schedule more flights for the rest of its fleet than it had previously planned – as it did successfully this year, argues Becker.

”United has done a solid job limiting cost pressure in 2019,” she says.

Despite the rise in non-fuel unit costs, or perhaps because of it, Pfennigwerth was impressed at United’s “expanding margins and hitting/upping its earnings targets this year”.

“We have large hubs in big cities across the country and because of that we should be the airline with the highest gauge, but at this point we aren’t,” said Kirby during the third-quarter earnings call.

Most of the gauge increases are slated for the last 90 days of 2020.

COSTS RISE FROM SOUTHWEST’S BET ON THE MAX

Southwest Airlines has had to sweat its assets and stretch its flight days quite a bit more than United this year as the low-cost carrier laboured to rebook its cancelled Max flights. Dallas-based Southwest has 34 Max jets in storage, Cirium fleets data shows. The airline, an all-Boeing operator, has 262 on-order aircraft, all of which are Max jets. 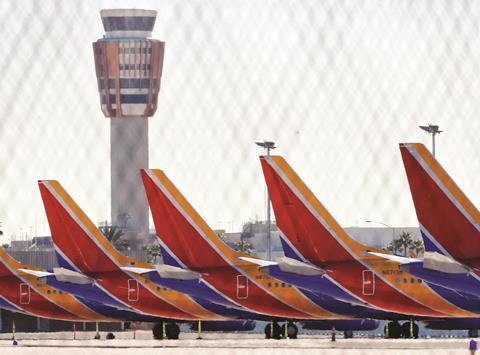 Additional Max delays in 2020 will make it extremely difficult for Southwest to expand capacity and revenue.

Five days before Southwest removed the Max from its schedule through 13 April, after Boeing disclosed 16 December the halt in Max production, the airline’s chief executive Gary Kelly said at a Wings Club lunch in New York that Southwest would have had 75 Max jets in its fleet by now if not for the grounding.

“By the end of next year it would have escalated to 115,” Kelly said. “So we’re behind in our expansion.”

FAA chief Steve Dickson’s 11 December announcement that the recertification process would extend into 2020, which sparked Boeing’s production halt, does not bode well for Southwest’s prospects in 2020. “That throws off our schedule,” Kelly said. “We’ve got work to do.”

“Southwest loves the 737,” says Cowen’s Helane Becker. “But in 2020, growth won’t be as high as it could be for Southwest because of the Max.”

The airline has calculated an $830 million hit to 2019 operating income from the grounding of its Max jets.

Before the worldwide grounding of the Max fleet, Southwest had planned to grow its capacity by about 5% in 2019. Capacity was cut 2.9% in the third quarter.

All of this is not to say that Southwest is not up to the task ahead.

The airline disclosed 17 December that it was experiencing “solid passenger booking and passenger yield trends” in the fourth quarter. It expects fourth-quarter unit revenue to be in the range of flat to up 2%. But it also expects unit costs excluding fuel to rise 4-6%, “driven by lower fourth-quarter 2019 capacity as a result of the Max groundings”.

Evercore’s Pfennigwerth said in a research note after Southwest reported its third-quarter earnings that the airline was “managing expectations well for high cost growth this year”. Both he and Becker wrote that earnings for the third quarter exceeded their expectations.

This month, Boeing agreed to compensate Southwest for a portion of projected financial damages from the grounding of the Max. While the full terms of the agreement have not been disclosed, around $125 million of the compensation from Boeing will be shared with Southwest employees based on the airline’s calculation of lost earnings.

Southwest’s discussions with Boeing regarding additional compensation for damages related to the Max grounding are ongoing.

In a 13 November note to Southwest Airlines Pilots Association (SWAPA) members, union president Jon Weaks suggested that the airline should explore “obtaining a different and perhaps non-Boeing aircraft for the best interest of all our futures”.

This suggestion may carry more weight in the aftermath of Boeing’s suspension of Max production.

POTENTIAL FOR CAPACITY ABUNDANCE IN 2020

Should the Max return to service toward the back end of the second quarter or even early third quarter, all four major US carriers may see declines in unit revenue in the second half of the year as additional capacity is reintroduced, potentially driving down ticket prices.

This gives the airlines one more reason to root in 2020 for an even stronger US economy that enables more consumers to fly more often.

This analysis was written by Steve Goldstein, who is part of Cirium’s US-based reporting team