Sweden’s air force commander hopes to advance a competition to replace the service’s Saab 105 (Sk 60) jet trainers from late this decade, while it also works to extend the life of its veteran air transport fleet.

“We are planning for replacing our trainers,” says Maj Gen Mats Helgesson; a former Saab Viggen and Gripen pilot who took command of the Swedish air force in October. “The Sk 60 has 50 years of service and is a really good aircraft, but we will pretty soon need to replace them.” Sweden operates around 50 of the jet-powered type. 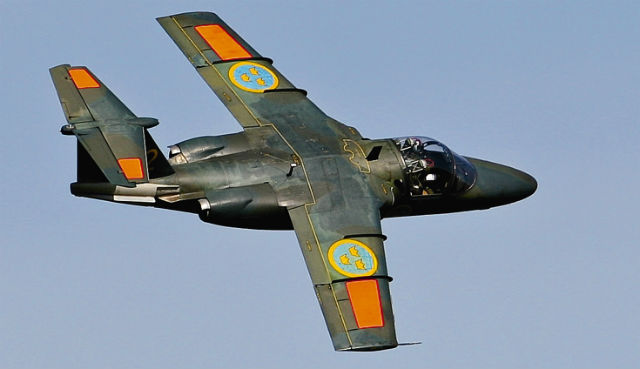 Speaking to journalists in Stockholm on 17 May, Helgesson said Sweden has decided to retain a basic pilot training capability in-country. It had expressed interest in participating in a proposed multinational Eurotraining project that failed to materialise.

Sweden has received responses to an initial request for information issued last year and linked to the planned trainer procurement. “We are digesting the information, and we will go back to the FMV [defence procurement agency] to more clearly state our needs. Then the FMV will go out for another check,” he says, declining to identify potential candidates.

Helgesson says challenges include deciding how to prepare pilots to operate the service’s future fleet of Gripen E fighters, as it will not acquire any two-seat trainer examples of the type. Deliveries of the new-generation combat aircraft will start in 2019.

Asked whether the air force could wait for the outcome of the US Air Force’s T-X trainer contest – for which Saab is a development partner with Boeing – Helgesson says: “We have quite a lot of different options. We could try to extend the Sk 60 for a couple more years, look to have a turboprop aircraft as a replacement or do some sort of combination with the Gripens.” No decision is expected this year but he says the service retains an option to try to field a new capability by 2020.

Meanwhile, the air force’s fleet of eight aged Lockheed Martin C-130H tactical transports – including a tanker – are being put through a service life-extension programme which is expected to conclude by 2021. This will enable the service to continue operating the aircraft until 2030, Helgesson says. Flightglobal’s Fleets Analyzer database records the Swedish airframes as being between 35 and 51 years old, with six in operational use.