ZeroAvia has gained approval from the UK aviation authorities to fly its modified Dornier 228 – partially powered by hydrogen fuel cells – but the maiden sortie has now slipped into next year.

Announcing the receipt of a permit to fly under Part 21 regulations from the UK Civil Aviation Authority on 23 December, ZeroAvia said the milestone followed a “an extensive ground testing campaign and a rigorous review of the full development programme”. 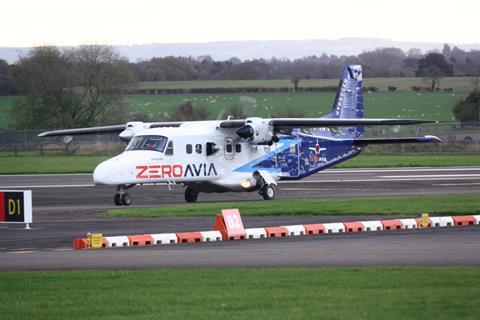 Test flights will be performed from Kemble airfield

Although ZeroAvia had hoped to secure a first-flight milestone in 2022, that will now not take place until early 2023, it says. Testing will be carried out from Kemble airfield in southwest England.

“We’re going to be starting 2023 in the best way possible, by demonstrating through flight that true zero-emission commercial flight is much closer than many think,” says ZeroAvia founder and chief executive Val Miftakhov.

The fuel cells and cooling systems, and gaseous hydrogen tank, plus back-up batteries, are housed inside the rear fuselage.

Should the flight-test programme run as planned then ZeroAvia will be able to submit a production-conforming configuration of the ZA600 powertrain for certification by the end of 2023, leading to deliveries in 2025.

ZeroAvia says the ZA600 is sized to power sub-regional aircraft with nine to 19 seats; its launch platform is the Cessna Grand Caravan turboprop single.

The US-headquartered developed claims 1,500 engines are covered by “pre-order” agreements and it has partnerships in place with seven aircraft manufacturers.

Curiously though the Do 228’s type-certificate holder is not one of them; General Atomics AeroTec is instead collaborating with a separate effort led by Germany’s DLR aerospace research body and engine firm MTU.