The result of the upcoming presidential election in Argentina could signal another seismic shift in the commercial aviation sector in one of South America’s largest and most volatile economies.

The result of the upcoming presidential election in Argentina could signal another seismic shift in the commercial aviation sector in one of South America’s largest and most volatile economies.

The 27 October election will determine whether or not Argentina will continue on the liberalised, business-friendly path of its current conservative incumbent president Mauricio Macri, or if it might return to the protectionist policies of his Peronist predecessor, Cristina Fernandez de Kirchner.

In an ironic twist, Cristina, as she is commonly known, is also returning to the political stage this year as Macri’s populist rival’s running mate.

When he first took office in December 2015, Macri promised to stabilise the economy and set about loosening the regulatory shackles the country’s aviation industry had endured for decades.

Since then, there has been a run on what is generally considered an underdeveloped market, with numerous low-cost carriers dashing in to seize a share, as government-owned flag carrier Aerolineas Argentinas continues to suffer under bureaucratic management and a rebellious pilots’ union. 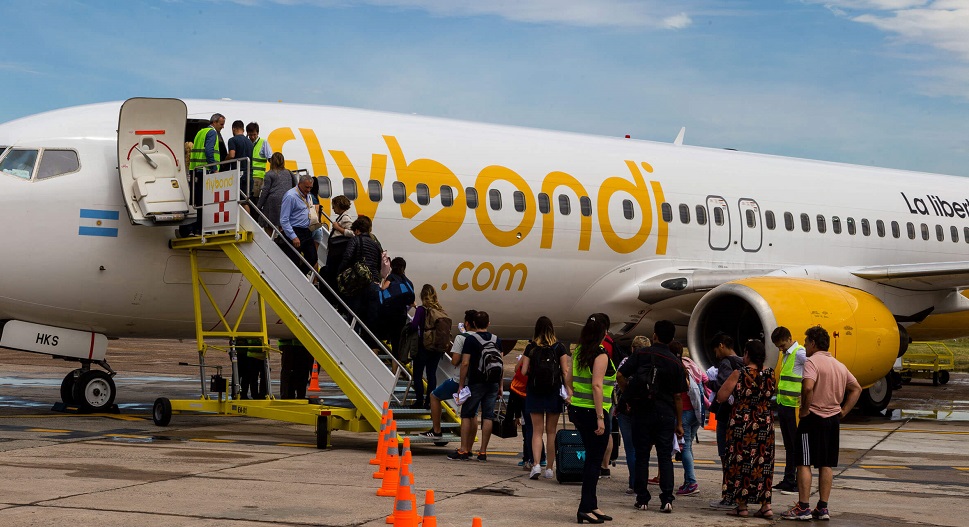 “It has been a land grab,” says Bruce Spear, a partner at management consultancy Oliver Wyman. “There has been tremendous enthusiasm, unlocking the untapped potential of the Argentine market. It seemed that any new entrant with a good story could attract fresh capital. The market would support eager, hungry low-cost upstarts and the target was so enticing.”

For the first time, domestic passengers have outnumbered international. Oliver Wyman analysis indicates that since 2017, when the market was opened to outside competitors, the number of domestic passengers rose 15% annually due in part to the removal of a rule that propped up flag carrier Aerolineas by keeping air fares artificially high.

Stunningly low promotional fares have made air travel affordable for many more Argentines, with an estimated 16.5 million planning to fly this year, according to Oliver Wyman’s projections. International capacity during the same period has remained flat, with an estimated 14.4 million passengers in 2019.

“The low-cost model has been very successful,” says Mauricio Sana, chief commercial officer of Flybondi. “Twenty percent of our passengers are flying for the first time. For us this is one of the most important goals because our compromise is to offer a better transportation option with prices according to Argentina’s reality.”

But even with this travel boom, the passenger numbers are not keeping up with capacity growth from these new entrants, which also weighs on the market’s profitability.

“That disparity [between domestic and international passengers] is notable,” Spear says. Domestic passengers earn and pay in pesos, but since the beginning of 2019, the peso has lost 40% of its value, he adds. “There is great pressure on the operators because they earn 100% of their domestic revenue in pesos, but 50-60% of their cost structure, for example for fuel, aircraft leases and maintenance expenses, is in US dollars.”

Macri is facing off for a second term against Alberto Fernandez, a leftist populist whose running mate is the country’s former president, Cristina Fernandez de Kirchner. Cristina had held the presidency from 2007 to 2015, directly following her husband Nestor’s term as president, and is disqualified from running for a third term herself.

During her eight years in office, Cristina had continued Nestor’s protectionist policies and extended currency controls, which limited Argentina’s competitiveness on the open international market. The Macri administration immediately set about eliminating regulatory burdens. In 2016 the government introduced a programme of austerity measures, intended to reduce inflation and public deficits, and lead to prosperity.

But the promised economic upswing never materialised. In 2018, Argentina suffered yet another bout of soaring inflation, which hit the peso hard. This past August, Macri’s Together for Change coalition suffered a stinging defeat in the primaries, putting his re-election to the presidency into doubt. Less than a month later, the government found it necessary to reimpose controls restricting foreign currency purchases after another sharp decline of the peso.

The government has also had its hands full in dealing with Aerolineas’ defiant unions. Industrial action by Aerolineas pilots and mechanics in the past year has disrupted hundreds of flights and delayed tens of thousands of passengers. The protests have centered around the “foreignisation” of the industry as well as wage loss due to high inflation.

A new Fernandez-Kirchner government is seen as being more receptive to the unions’ demands, and could place new restrictions on the low-cost upstarts.

Despite the political volatility, low-cost carriers still see enormous growth potential in Argentina. Norwegian Air Argentina, which began service from Buenos Aires’ Aeroparque Jorge Newbery a year ago, has acquired a 7% market share and now operates 65 weekly flights to eight destinations including Salta, Bariloche, Mendoza and Ushuaia on a fleet of three Boeing 737-800s. Earlier this year it said that by the end of 2019 it aims to operate between six and 10 aircraft. In July it filed plans with the civil aviation authority ANAC to launch up to 11 routes connecting four Argentine cities with up to nine destinations in the USA.

“Argentinian aviation has a low level of development, especially when compared to neighbouring countries,” says Anders Lindstrom, Norwegian’s communications director in North America, adding that Brazilians fly almost twice as often and Chileans almost three times as often as Argentines. “It’s also the eighth-largest country in the world by size and with a limited affordable flight network.”

Flybondi and Indigo Partners-backed JetSmart, the most recent entrant into the fray, have set up shop at Buenos Aires’ El Palomar airport on the western edge of the sprawling capital. They were recently handed a defeat by an administrative court, when it implemented a night-flight ban over the former military airfield. At the time, a Flybondi source said that, if implemented as ordered, a night-flight ban “would obviously affect our expansion and investment plans”.

Cirium fleets data shows that Flybondi currently leases 737-800s for its services within Argentina and to Punta del Este in Uruguay and Asuncion, Paraguay. The airline recently began thrice-weekly service to Rio de Janiero, its third international destination. It will also be launching service to Florianopolis from December. The carrier is looking to clear 8 million passengers annually with 25 aircraft, serving 40 domestic and 25 Latin American destinations by 2021.

Flybondi’s Sana also sees huge potential in Argentina, up to 2.5 times its current capacity in the next five years. “That suggests increments in fleet, airport infrastructure, federal connections and adequate government politics in order to promote and facilitate competitive players that would serve new passenger segments,” he adds.

Sana is optimistic that even a Kirchner-loyalist dominated government will not limit the newcomers’ business operations. “We have to teach to Argentina how the low-cost model works, and the total positive impact generated in all areas of society. This is not easy but we expect that any government in the future would support the model,” he says.

JetSmart’s Airbus fleet has protected it from uncertainty around Boeing’s issues with the 737 Max. It launched domestic revenue services in April this year, with flights from El Palomar to Mendoza. Services from El Palomar to Neuquen, Cordoba and Salta followed before the end of the month. The airline also set up a second hub in Cordoba, offering flights to Salta. JetSmart currently runs a fleet of three Airbus A320s and plans to serve 25 destinations by 2022.

A wildcard of sorts is LATAM Airlines Argentina, which serves an extensive domestic network from twin hubs at Buenos Aires’ Ezeiza International airport and the downtown Aeroparque. Delta’s surprise acquisition of 20% of LATAM for $1.9 billion in late September will give the US carrier a partnership and an entrance into the Argentine market it had long been looking for. It will also allow LATAM Airlines Argentina greater access to North American travellers.

“LATAM is currently a solid number two to Aerolineas in several key markets, but they too are under pressure from the new entrants,” Spear says. He adds that LATAM needs to find a defensible position in the market and establish itself in Argentina, perhaps as a JetBlue-style airline and leveraging its international partnerships. “It’s in an interesting position. Let’s see what they do with it.”