The 'O-duct' mechanism is an electrically-controlled cascade reverser for the CFM International Leap-1C engine on the Chinese-built aircraft.

It has been developed by Safran as a single-piece composite structure to replace the typical two-door 'D-duct' reversers on other aircraft, such as the Airbus A380.

The O-duct encircles the engine, spanning 330°, eliminating the bifurcation of the D-duct design which can affect flowpath efficiency.

Safran also points out that the one-piece configuration reduces the reverser's structural weight, and that the electrically-driven system – rather than hydraulically-driven – results in a lighter mechanism and simpler maintenance.

The C919 has yet to fly but high-speed ground runs at Shanghai have enabled the manufacturer to observe the reverser in a true operational scenario.

Deployment of the O-duct device to decelerate the twinjet occurred during nose-gear unstick tests, and its activation was captured on footage of the ground runs by China's Xinhua news agency. 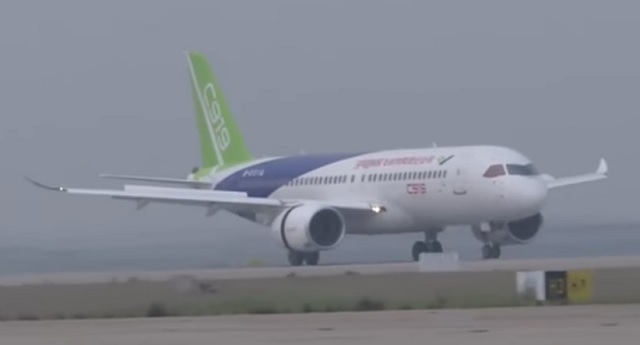 "After this high-speed test the Comac pilots expressed their satisfaction with the O-duct's performance," says Safran Nacelles' Manuel Rodriguez Arenas, the on-site integration leader in Shanghai, who is taking over as the company's C919 project manager.

Chinese personnel are to take on greater management responsibility for the C919's nacelle project from Safran Nacelles in France following the ground tests, while Safran will reinforce the local team with staff from its French plants during flight testing.