Roketsan and Airbus Defence & Space’s feasibility study into the potential integration of the former’s Stand-Off Missile (SOM) onboard the Eurofighter Typhoon is some six months from completion, the manufacturer says.

A memorandum of understanding covering collaboration between the two companies was signed at the ILA show in Berlin in 2014, and the Turkish weapons developer says that the assessment of the cruise missile on the fighter is nearing completion.

Typhoon is in operation with Germany, Italy, Saudi Arabia, Spain, and the UK. New weapon integration is key to the development plan for Eurofighter, and other planned upgrades include the MBDA Storm Shadow and Brimstone, Taurus missiles and Raytheon Small Diameter Bombs. 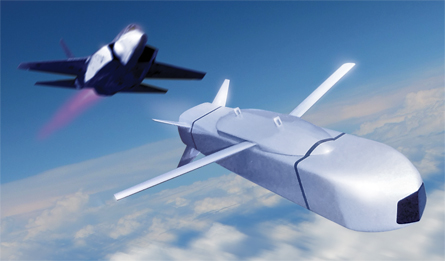 The variant of the missile that is being developed for the Lockheed Martin F-35 Joint Strike Fighter – the SOM-J – will be flight tested in the fourth quarter of 2016, Roketsan adds, ahead of qualification completion in 2018.

“The qualification of the missile will finish in 2018. However, the production start will depend on the JSF integration and aircraft deliveries to the Turkish air force,” it says.

The company adds that according to current schedules the integration of the weapon onto the F-35 will finish in 2020, and production may start in parallel to that.

SOM is also operated onboard the Turkish air force’s Lockheed F-16 Block 40 aircraft, and it is anticipated that the SOM-J will be tested from the type ahead of integration on the JSF.