With the South Korea air force “Black Eagles” display team featuring on the cover of this week’s Flight International, what better excuse to celebrate – somewhat at random and in no particular order – 10 military flight display teams that may be coming to an air show near you.

The Frecce Tricolori (Tricolour Arrows), known formally as the 313° Gruppo Addestramento Acrobatico and based at Rivolto Air Force Base, have been a unit since 1961. They fly the Aermacchi MB-339-A/PAN two-seat fighter-trainer. The team is sadly associated with one of worst-ever air show disasters, at Ramstein in 1988 when three of the team collided in mid-air; the resulting crash killed 70. 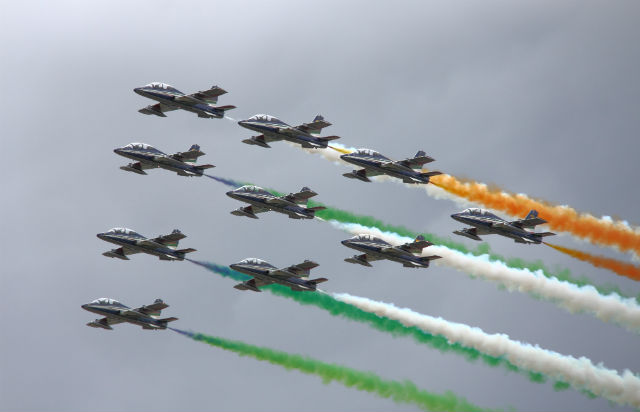 2. US Navy and Marine Corps

The Blue Angels date from 1946, being pre-dated only by the Patrouille de France (1931). The six-aircraft team fly Boeing F/A-18 Hornets, all former fleet aircraft. In a proper celebration of modern American military might, the team was grounded for several months during 2013 owing to budget sequestration, but resumed a reduced schedule in the interest of public relations. 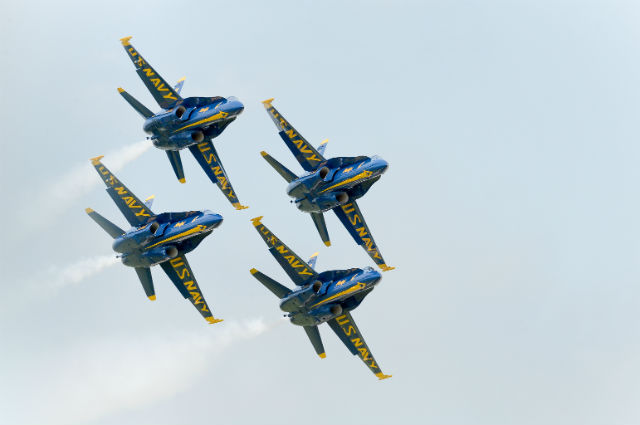 The Black Eagles team dates back to 1994 and originally flew Cessna A-37B Dragonflies, but South Korean air force display teams go back to 1953, with North American F-51 Mustangs; later, they’ve flown the Lockheed T-33A, North American F-86 Sabre and Northrop F-5A. Since 2010, they’ve been strutting their stuff in Korea Aerospace Industries' T-50 Golden Eagles – and making quite a show of it; awards include the Boeing Trophy for best display at the 2012 Waddington International air show, and multiple honours on their first appearance at the Royal International Air Tattoo, the same year. 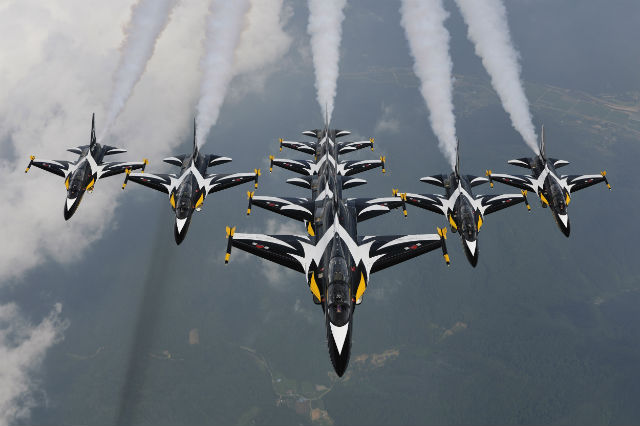 The Royal Australian Air Force’s Roulettes are unique in this list – being propeller-powered. Their choice of mount is the Pilatus PC-9 turboprop. The type, apparently, is regarded as easy to fly, with lots of power and manoeuvrability – but not so easy to keep in tight formation and susceptible to turbulence. 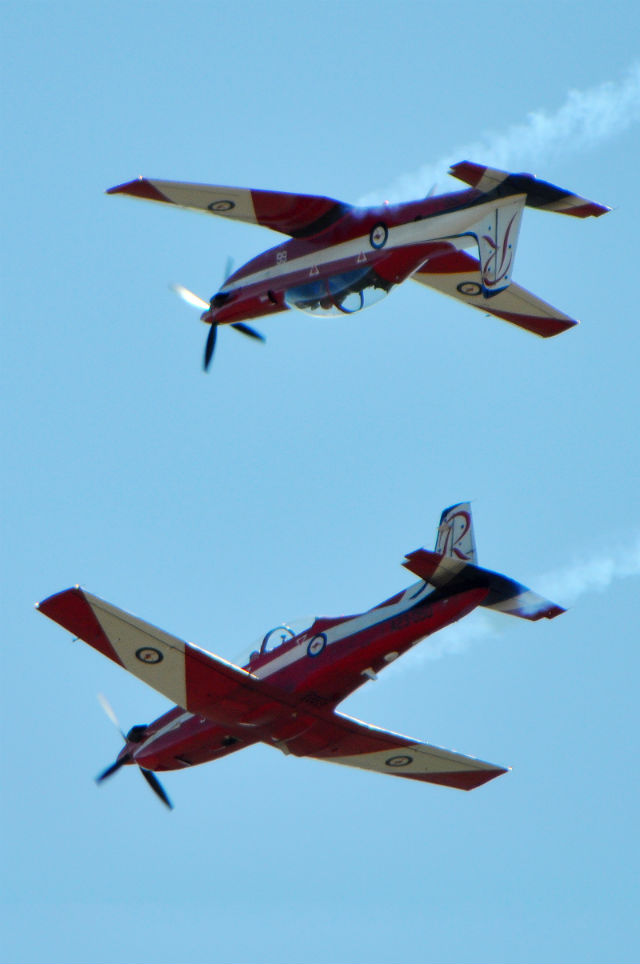 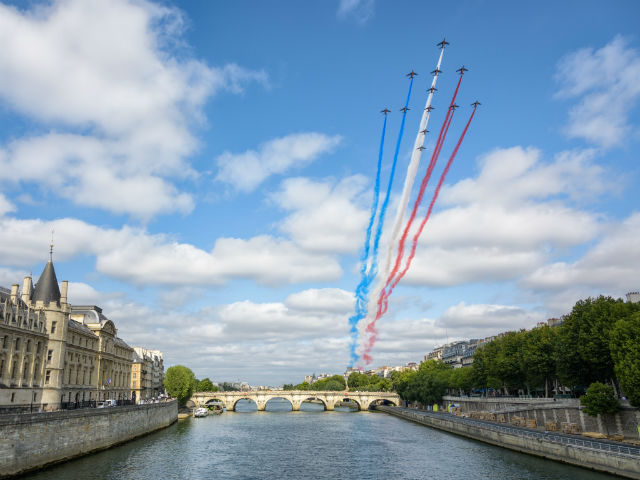 One of the best-known demo squads, the Nellis AFB-based Thunderbirds have been General Dynamics F-16 jockeys since 1983, now flying the C version. The type was adopted after a disastrous 1982 crash that killed four pilots in diamond formation – all hit the ground following their leader, whose stick actuator had suffered a mechanical fault. That incident ended the team’s days in Northrop T-38 Talons; other aircraft flown by the Thunderbirds include the Republic F-84G Thunderjet, F-84F Thunderstreak, North American F-100C Super Sabre and the McDonnell Douglas F-4E Phantom.

Another F-16C crew is the Black Knights; Singapore’s air force team started out in 1973, flying Hawker Hunters and then the Northrop F-5E Tiger II. Four team pilots were killed on crashing, in cloud, into a mountainside; fate was not kind to one survivor, Tsu Way Ming, who in 1997 was piloting the Boeing 737 of SilkAir Flight 185, which crashed en route from Jakarta to Singapore, killing all 104 on board. 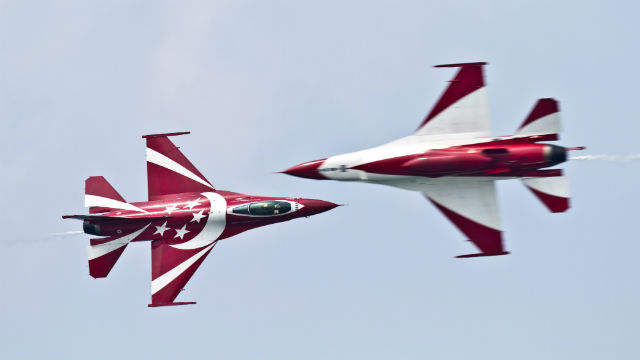 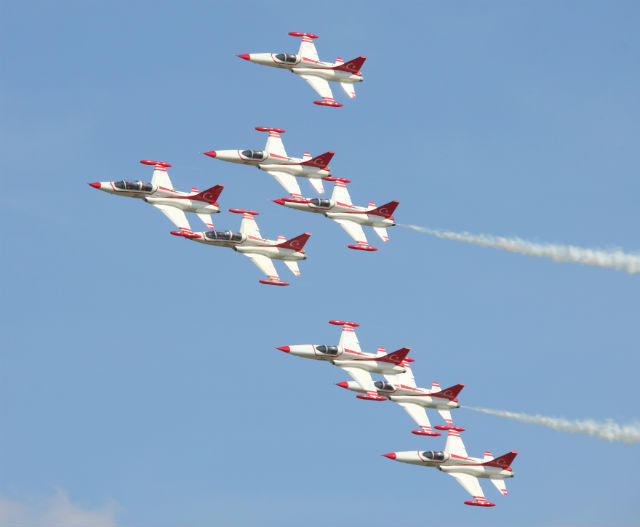 The Russian Knights air force display team started out in 1991 with Sukhoi Su-27s, and now flies both the P and UB variants. 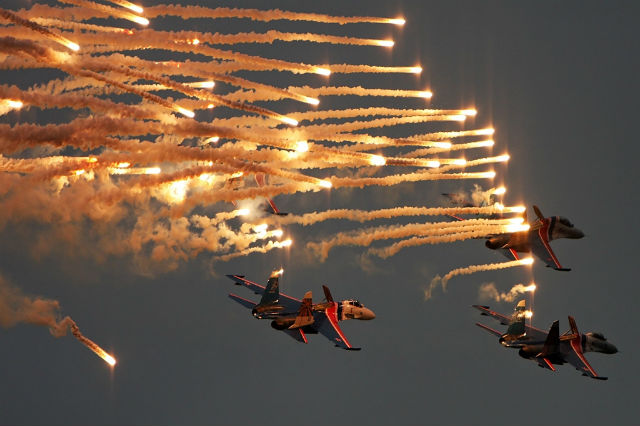 This team dates back to 1962 and is named August 1st, commemorating the anniversary of the foundation of the People’s Liberation Army, in 1927. Starting out with Chengdu JJ-5s, the August 1st later changed to the Chengdu J-7EB, J-7GB and, since 2009, the Chengdu J-10. 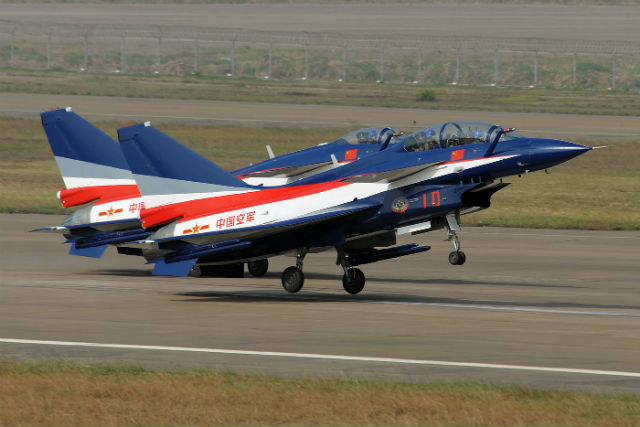 The Royal Air Force Red Arrows left benind their Folland Gnats in 1979 to take up their now-familiar BAE Hawk trainers. Traditions are many but one is particularly notable in these austere times. The Gnats, it seems, were not only inherited from the predecessor Yellowjacks team, they were also attractive for being less expensive to operate than real fighters. The same surely applies to Hawks; paid for by now and not a patch, fuel- and maintenance-wise, on Typhoons. 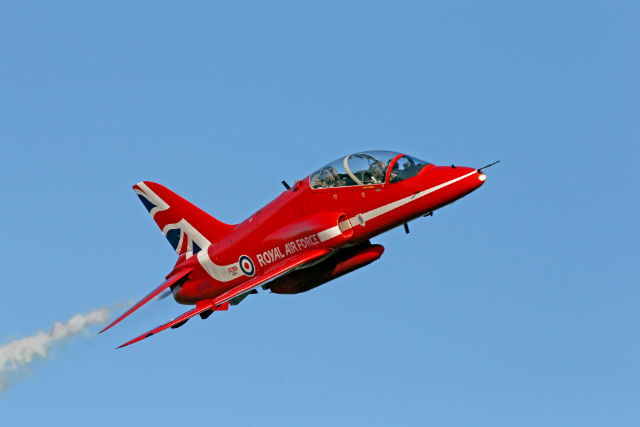