MH370: Search continues, but mystery remains as deep as the sea

The disappearance of Malaysia Airlines flight MH370 on 8 March 2014 was certainly the most baffling aviation tragedy of the year – if not of all time.

The aircraft – a Boeing 777-200 carrying 239 people – took off from Kuala Lumpur at 00:41 local time headed north for Beijing, where it should have arrived at 06:30. Instead, the aircraft made its last contact with air traffic control about an hour into its flight, over the South China Sea, before flying beyond the range of ATC radar.

Then, deviating westward from its planned flight path, MH370 was tracked by Malaysian military radar as it crossed the Malay peninsula until flying out of range, about 100min after take-off. Several subsequent contacts with Inmarsat satellites led search teams to conclude that the aircraft flew south into the southern Indian Ocean, presumably until running out of fuel and crashing into the sea.

Estimates of its flight path and endurance based on fuel load provided some guide to searchers, but after several weeks of intensive multinational air, sea and sub-sea effort turned up no clues, Australian authorities opted to focus on a “priority” area – a vast, 60,000km² arc of open ocean to the west of Australia (see map).

As the one-year anniversary of the tragedy approached, some 40% of that area had been searched, to no avail; weather permitting, the search may have covered the entire zone by May 2015. If at that point nothing has been found, the search may be declared finished and the mystery, presumably, unsolved.

On 29 January 2015, the government of Malaysia formally declared the loss of MH370 to have been an accident, opening the way for compensation to be paid to the victims. Of the 239 people on board, 12 were Malaysian crew members and 227 passengers, including 153 Chinese.

The cause of the tragedy remains a mystery. The aircraft’s primary ACARS automatic broadcast system had been disabled during flight, pointing to deliberate action by the flight crew, but unless the aircraft and its black box are recovered, ideas as to the cause of the disappearance remain speculation.

As after the loss over the Atlantic ocean of Air France AF447 in 2009, the loss of MH370 revived calls for aircraft to be equipped to relay, at frequent intervals, information about their position and condition to satellites, at least when they are flying out of range of ATC radar. ICAO has now recommended tracking at 15min intervals, though some experts warn that such a system would not protect against deliberate disablement. 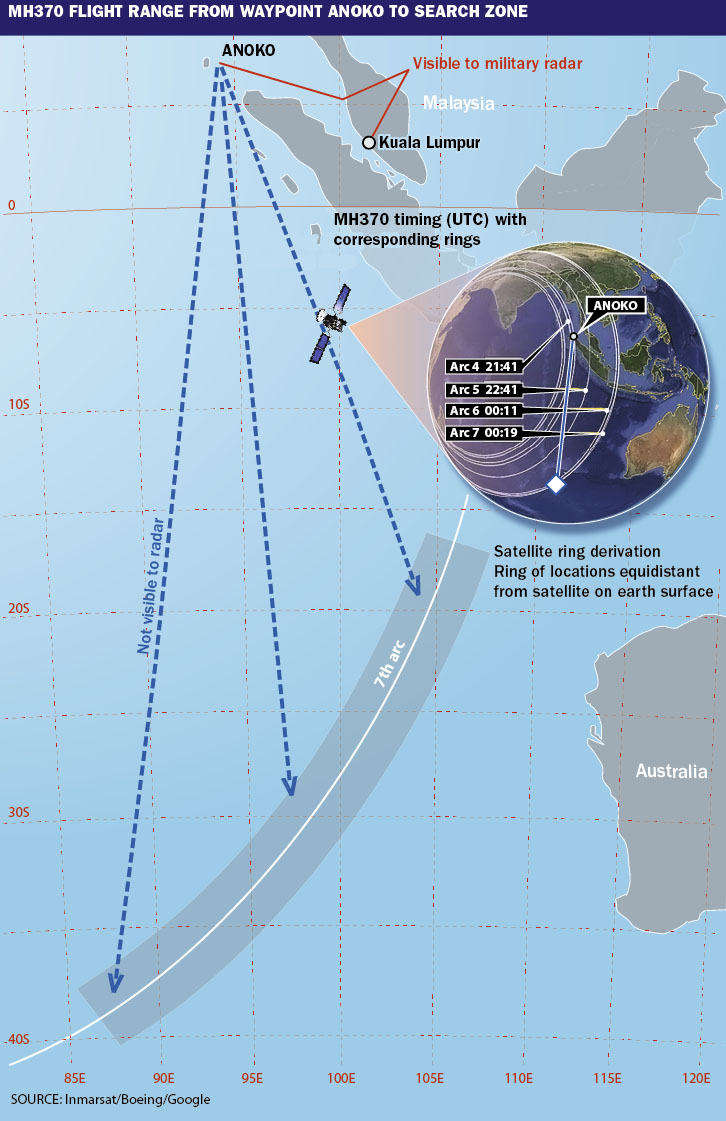