UK aviation policy and the environmental impact of air travel were under the microscope at the high-level, wide-ranging Airlines 2050 event held in London on 17 October.

UK aviation policy and the environmental impact of air travel were under the microscope at the high-level, wide-ranging Airlines 2050 event held in London on 17 October.

Organised by FlightGlobal in association with airline representative bodies Airlines UK, BAR UK and IATA, the one-day event was held at a crucial time for the sector and UK aviation in particular. It was set against the backdrop of challenging market conditions following recent airline collapses, including that of Thomas Cook Group, debate around plans for a third runway at London Heathrow airport, and growing momentum among environmental groups, notably Extinction Rebellion.

Expansion at London Heathrow was a particularly hot topic. While much of the attention has focused on the lengthy process around the decision to build a third runway to tackle a capacity shortage in the UK’s southeast region, the issue of slot allocation was a key discussion point. 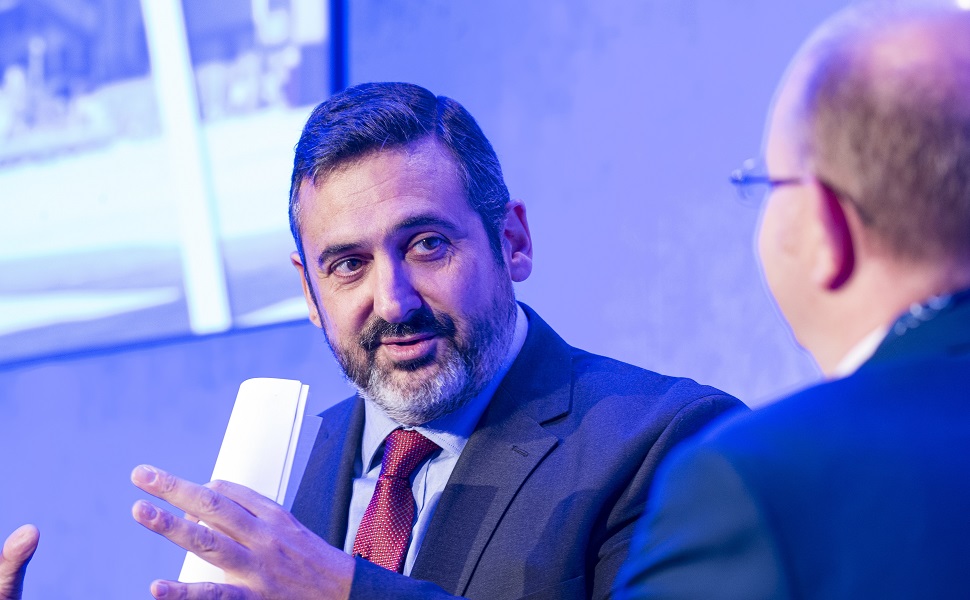 The UK government is considering how to reform slot allocation for the new Heathrow capacity as part of its Aviation 2050 green paper. Speaking at a panel debate on the country’s aviation strategy during the conference, the UK Department for Transport’s director of aviation Dan Micklethwaite acknowledged that the expansion at Heathrow is a “unique scenario” for slot allocation. “We believe there is a case for change here, and we want to work with the industry and IATA to start a debate on what it looks like,” he says.

In a keynote address at the conference, Virgin Atlantic chief executive Shai Weiss said that with the third runway at Heathrow enabling 350 extra pairs of daily take-off and landing slots, policy decisions in the next 12 months would determine airline competition at the airport for decades to come.

“Applying the current regime could give us as few as 10 slots and our largest competitor more than 80. Failure to act to change will simply entrench the status quo,” Weiss says.

He argues that too much attention in the debate is currently focused on the process rather than the outcome. “We have a once-in-a-generation opportunity to transform the market,” he says. “The outcome we need is a scale competitor. For a second flag carrier to emerge. Perhaps with 15-20% of the slots at Heathrow; still less than half the size of the current flag carrier.”

While Weiss was maybe at odds with Heathrow rival British Airways over slot allocation for the third runway, there was common ground on the importance of tackling environmental issues.

“Our industry must respond to this challenge,” Weiss states. “And be clearer about the important actions we have already taken and our plans for the future. And if we are to become Britain’s second flag carrier, we must show that we can grow in a sustainable way.

“We also must embrace the challenge of ‘net zero’ by 2050. I applaud IAG for their announcement last week,” he continues, referring to the BA parent’s move to commit to net zero CO2 emissions growth. “We absolutely share their ambition. This issue should unite us and our competitive instincts should be checked at the door.”

As part of its Flightplan Zero programme, BA has committed itself to being carbon-neutral by 2050, in line with the UK government’s target of net-zero emissions by that date.

Along the way to that goal, BA is aiming for a net 10% reduction in CO2 emissions per passenger by 2025 and a 20% cut by 2030, targets it says are tangible, measurable and accountable. The airline has also committed to offsetting the carbon for all UK domestic flights.

In his address to the conference, BA chief executive Alex Cruz flagged the potential of sustainable fuels in hitting these targets. “We believe we can have 14-15 sustainable aviation fuel plants in the UK by 2035, producing nearly 8% of total UK aviation fuel needs,” Cruz told delegates. By 2050, that figure should rise to around 30% of UK aviation fuel being sustainable, “a very big chunk of the actual fuel consumption”.

One of the prime tools for helping to offset aviation emissions in the near term is the ICAO global market-based offset scheme, CORSIA. The initiative, which enters force on a voluntary basis from the start of 2021, came under further scrutiny at ICAO’s latest general assembly, which took place in September and ultimately passed a resolution reaffirming commitment to the scheme.

“What happened at ICAO was a number of very robust discussions,” explains Michael Gill, who heads the industry coalition the Air Transport Action Group (ATAG). “A number of states expressed concerns or even dissenting views. From my perspective, we agreed to implement CORSIA, we have milestones coming up, and this year’s ICAO assembly was a step on the journey. It doesn’t to my mind change that implementation; we need to drive ahead with it.

“What it did was to allow some states to express their concerns on some of the design elements of CORSIA. We heard what they are and it gives them an opportunity from an industry perspective – but I also hope from other perspectives – to work with those states to reassure them, to explain why CORSIA from a cost perspective will not irreparably damage the airlines in certain parts of the world.”

Several speakers flagged how messaging around work already done by the sector had failed to resonate with the public. “We have tried to communicate what is a very simple message but we can’t seem to get traction on it,” notes Emirates Airline president Tim Clark in the closing chief executive panel debate, describing aviation as “poster whipping boy” on climate change.