Three or four years ago, the United Arab Emirates' rival hubs were dealing with the challenges of success. Dubai International (DXB) was straining at the seams, with government operator Dubai Airports mulling a rapid expansion plan for the new Al Maktoum airport to ease pressure on the world’s busiest international hub, where passenger numbers looked to be racing towards 100 million by the turn of the decade.

Three or four years ago, the United Arab Emirates' rival hubs were dealing with the challenges of success. Dubai International (DXB) was straining at the seams, with government operator Dubai Airports mulling a rapid expansion plan for the new Al Maktoum airport to ease pressure on the world's busiest international hub, where passenger numbers looked to be racing towards 100 million by the turn of the decade.

Meanwhile, a 90min drive away, Abu Dhabi's giant Midfield Terminal was emerging from the desert as a prestigious new home for flag carrier Etihad and its growing roster of partner airlines. State owner Abu Dhabi Airports (ADAC) was focusing on the construction, and putting together a detailed timeline for transferring the bulk of its operations from its existing largely 1970s-era facilities. 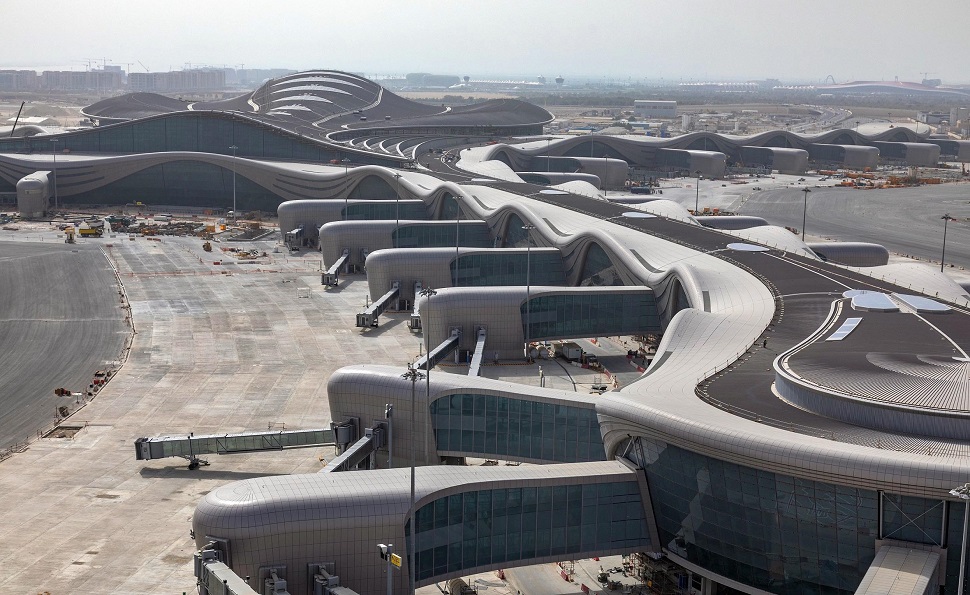 Today, the travails of their largest customers have impacted both airport operators. At DXB, a strategic rethink at Emirates prompted by the cancellation of the Airbus A380 programme, the grounding of Flydubai's Boeing 737 Max fleet, and the collapse of India's Jet Airways have all kept the brakes on already sluggish growth.

Passenger numbers at DXB increased 1% in 2018 to 89.1 million – the weakest rate in a decade – and Dubai Airports chief executive Paul Griffiths expects the total to be "around the 90 million mark" in 2019. "Our rapid ascent has reached an inflection point," he admits.

At ADAC, chief executive Bryan Thompson, appointed in August 2018, admits it has been a "painful period" for Etihad as the 16-year-old airline has retrenched its network and seen a number of carriers in which it had invested, including Air Berlin, Alitalia and Jet Airways, collapse or enter administration. The state-controlled carrier represents around 80% of traffic at the airport.

However, with the showpiece Midfield Terminal just weeks from completion, Thompson sees signs of traffic growth returning for its biggest customer in time for the facility's planned opening in 2020. "We are reaching some form of even keel, with good load factors after a decrease in movements," he says.

For Griffiths, the slowdown has at least taken the pressure off when it comes to squeezing more capacity out of DXB, corralled by residential and commercial buildings and unable to grow outwards. It has also meant a decision on decamping the Emirates operation to a vastly expanded, 160 million passenger-capacity DWC can be put off for a few years.

Any such move is now unlikely to happen before the first half of the 2030s, with a decision on the next phase of expansion at the desert airport in the southern Jebel Ali district of the city on hold for now as Dubai's rulers consider their investment priorities for the next decade.

For now, Griffiths believes that with intelligent use of the space Dubai Airports has available at DXB, and by using "smart technologies" to speed throughput, passenger capacity can be increased to 120 million over the next three years. "With 30 million capacity at DWC, that takes us to a total of 150 million," he says.

One challenge for Dubai Airports will be working with Emirates manage the transition as A380 numbers reduce and its fleet mix changes. This is likely to mean higher frequencies and demand for gates. However, with most A380 flights arriving and departing in three peaks – midnight to 02:00, 08:00 to 10:00, and 14:00 to 16:00 – Griffiths hopes that "if we can spread the load, it will be a better outcome all round".

Dubai Airports has also been helping Emirates and sister airline Flydubai enhance their two-year collaboration. This has seen their brands and management remain distinct, but more operational integration, including on codeshares. There are now around 20 Flydubai daily departures from Emirates' Terminal 3. Flydubai has traditionally used Terminal 2, on the northern side of the airport, exclusively.

Part of the plan will be to "inject" Flydubai 737s into operational troughs created by the Emirates arrival and departure banks. "We have been progressively moving Terminal 2 flights to Terminal 3 on high-density city pairs, fitting between Emirates peaks," says Griffiths.

Smart technologies are also crucial to squeezing more capacity from DXB. An app available to all "stakeholders" shows passenger flow throughout the airport in real time. "It means we can micromanage customer touch points, by identifying pinch points on the iPad – even the queues at taxi ranks," says Griffiths. "That makes it quite powerful. Even [Emirates and Dubai Airports chairman] Sheikh Ahmed has the app."

Although further "airport enhancements" are planned for DXB – including an initiative to reduce walking distances for passengers, details of which remain under wrap – Griffiths says Dubai Airports wants to make the switch culturally from being "an infrastructure company" to "a customer and hospitality company". He adds: "We are in the business of creating memorable experiences for people."

Designing a "fundamental shift in terms of passenger experience" and "creating something truly amazing" has also been part of ADAC's masterplan since construction began on the Midfield Terminal in 2012, says Thompson, who previously worked for Dubai Airports, and prior to that at Launceston in Australia and Mumbai.

Although the facility is "96%" complete, with non-operational trials completed successfully on the baggage system this summer, Thompson stresses that the terminal will only open in 2020 "if we can satisfy our desired outcomes". He insists: "We are not shying away from the fact that we have to manage the reputation of Abu Dhabi, and we will never compromise on that reputation."

As part of its final evaluations, ADAC has carried out trial customer journeys, using "personas" such as a time-pressed business traveller or family looking for distractions for their children. The terminal, says Thompson, has been designed almost entirely on one level, with gates extending from a central hub. The "most modern baggage system in the world" will allow a "seamless" 45min connection between flights.

Gates will be allocated using an algorithm-based system, which will position arriving aircraft with a high proportion of connecting passengers to a certain flight close to that gate, and those heavier with O&D traffic nearer baggage reclaim and immigration, says Thompson.

Although the original intention was for the Midfield Terminal to be dedicated to Etihad and its partner airlines, the plan is now for all carriers to move to the new building, vacating current terminals 1, 2 and 3. While the low-cost Terminal 2 will close, Thompson says there are "interesting discussions about what to do with [the adjoining Terminals 1 and 3]", including converting the buildings to a retail mall.

Etihad's troubles, including the collapse of Jet Airways, have seen annual passenger numbers slip at Abu Dhabi International from around 25 million between 2014 and 2016 to 22 million in 2018, with a similar total expected in 2019.

Abu Dhabi has been working hard over the past decade to attract more visitors – following the model of Dubai – with a number of new, high-end hotels and resorts, as well as attractions such as the Louvre art gallery and Ferrari World. The airport has traditionally been split about 75:25 between connecting and O&D [originating and departing] passengers, but Thompson says a "nice balance" would be 60:40.

The terminal, with its soaring 52m ceilings, he says, is "an iconic piece of infrastructure with a phenomenal finish". For passengers, it will represent a "taste of what is to come if you are coming to Abu Dhabi, and, if you are connecting, what you are missing."