Major carriers Garuda Indonesia and Lion Air have been cutting capacity in the Indonesian market since late 2018, but smaller operators have ramped up to fill the gap.

Major carriers Garuda Indonesia and Lion Air have been cutting capacity in the Indonesian market since late 2018, but smaller operators have ramped up to fill the gap.

Cirium schedules data shows that the two dominant players are set to continue shedding capacity at least until the end of the year.

But that has corresponded with growing capacity from Garuda’s low-cost subsidiary Citilink and Indonesia AirAsia. Curiously, struggling Sriwijaya Air is also playing its part.

For many years Garuda, despite being state-owned, has played second fiddle to Lion when it comes to the amount of capacity offered.

When it comes to cutting capacity, however, the flag carrier has gone beyond Lion. Cirium schedules data shows that Garuda reduced its domestic seat capacity by 23% for the first nine months of 2019.

The cuts have allowed Garuda to recover in terms of passenger yield. The carrier’s operating statistics for the nine months to September indicate that domestic yields improved 38%, amid a 22% fall in passenger numbers. 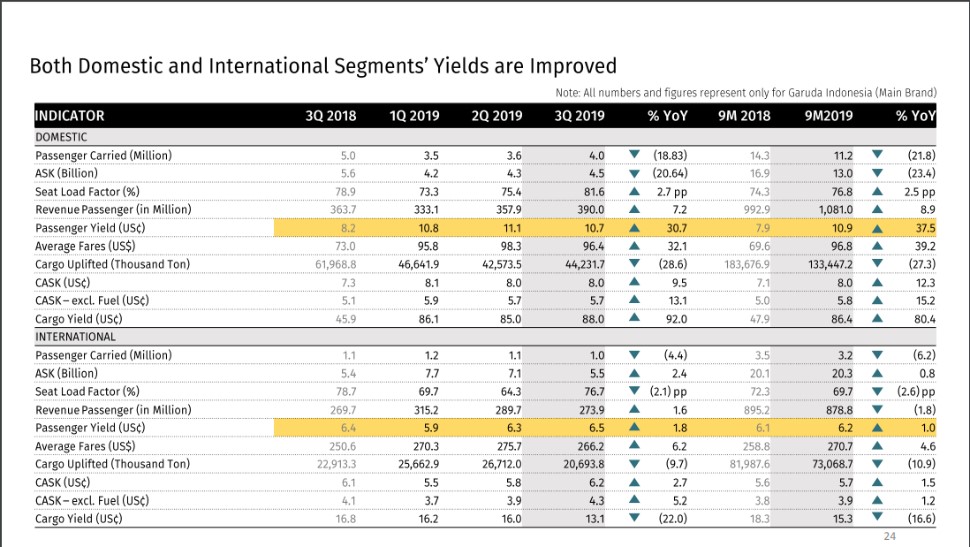 As a privately-held company, Lion Air Group does not disclose any financial or operating statistics, let alone explain its decisions. The reduction by the duo may have led to a yield recovery similar to that of Garuda.

It is worth noting, however, that some of the reductions by these carriers can be attributed to a fall in demand for travel during the Islamic fasting month of Ramadan, which ran from May into June this year.

Despite the financial troubles it is facing, Sriwijaya Air grew its capacity by 13% during the first nine months of 2019. This may have been to compensate the 19% capacity cutbacks made by its sister airline Nam Air, or it could have been part of a drive to expand in places where it could make money.

In an attempt to turn around the loss-making airline group, Sriwijaya Air Group signed a management agreement with Citilink in November 2018.

GROWTH FOR CITILINK AND INDONESIA AIRASIA

As the smallest low-cost player, Indonesia AirAsia took advantage of the capacity cuts by the major players to grow. This was achieved through fleet additions from AirAsia Group, and taking over eight Airbus A320s that were previously operated by its long-haul sister Indonesia AirAsia X. Cirium fleets data shows that the airline now operates 28 A320s.

Over the first nine months of 2019, Indonesia AirAsia more than doubled the number of seats deployed, far outstripping the 5.3% climb for the same period in 2018. This can be attributed in part to the launch of its Lombok hub in June, and increased frequency on key routes such as Jakarta-Denpasar.

That growth is also helping the airline to reduce its losses. During the July-September quarter, parent company AirAsia Indonesia returned to profitability. Operating profit came in at Rp64.3 billion ($4.6 million) as revenue jumped 66% to Rp4.83 trillion.

Not wanting to lose out, Citilink added around 6% more seats during the nine-month period. The number of seats deployed during this period alone led it to become Indonesia’s third-largest carrier in terms of seats, well ahead of Lion’s full-service unit Batik Air.

Citilink’s slower growth pace could also be a reflection of its size. It operates 50 A320s, along with four ATR 72-600s transferred from Garuda. Having posted a loss in 2018, Citilink is now focusing on yield improvements and profitability.

The last three months of the year fall within Indonesia’s peak travel season, but Cirium schedules data indicates that only Citilink, Indonesia AirAsia and Sriwijaya Air will be adding capacity over the remainder of the year.

Around 78% more seats will be deployed by Indonesia AirAsia during the October-December quarter, followed by Citilink at almost 10% and Sriwijaya with almost 4%.

By comparison, Garuda will cut capacity by 20%, while Lion Air and Nam Air are to reduce seats by 17% each. Batik Air will have the smallest reduction of 8%.

Despite the cutbacks for many to date, it is no secret that Indonesian airlines are banking on the final months of 2019 to eke out a profit or, at the very least, narrow their losses.

“The second half [of 2019] is usually more crowded [with travellers], and we believe that our income will rise in line with the growing demand for travel,” said Indonesia AirAsia’s chief executive Dendy Kurniawan as the carrier disclosed second-quarter results.

Garuda had set a net profit target of around $70 million for this year, and is hoping to achieve that by raising its yields in the passenger business, closer co-operation with Sriwijaya Air Group carriers, development of the cargo business and growing sales for MRO subsidiary GMF AeroAsia.

Even with the challenges, the market outlook appears to be bright for Indonesia.

IATA’s report on Indonesia indicates that the country’s air transport market is set to triple in size over the next 20 years, based on current trends. In 2017, passenger journeys in Indonesia reached 122 million. This could increase to 390 million by 2037.

Under the highest growth forecast, the country would generate 631 million passenger journeys; the most conservative estimate is 305 million.

As Indonesian president Joko Widodo begins his second and final presidential term, he has appointed new economic ministers, while retaining the transport and public works ministers. This would mean a stronger emphasis on developing the country’s economy, but also greater transport and infrastructure development that should indirectly aid the airlines in the longer term.