Indonesian carrier Batik Air has taken delivery of its first Airbus A320neo, the 46th Airbus aircraft in its fleet.

The aircraft is equipped with 12 business and 144 economy class seats, according to Airbus. It was handed over at Jakarta’s Soekarno-Hatta International Airport. 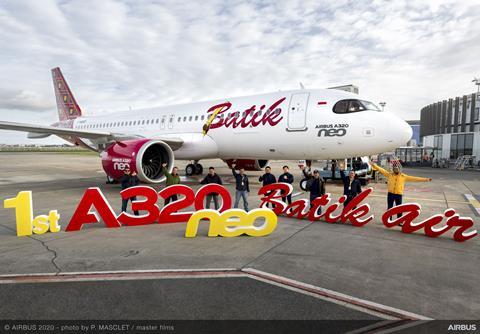 The aircraft bears the registration PK-BDF (MSN9505) and is powered by two CFM International Leap engines.

It is listed as having orders for four aircraft: an additional A320neo, and three 737 Max 8s. The new A320 is owned and managed by Lion. Overall, Lion has 426 firm orders for Airbus, Boeing, and ATR aircraft.