Airlines are gathering for this year’s IATA AGM against a backdrop of pressing challenges, including the protectionist policies and trade wars pursued by some governments over the past 18 months, in the view of the association’s chief executive and director general Alexandre de Juniac.

Speaking to FlightGlobal on the eve of the AGM, which begins in Seoul on 1 June, de Juniac says airlines consequently have a mixed view of the current climate.

“The mood is balanced. There is some optimism because we are expecting significant growth in the coming two decades, and up to now the traffic is positive, at least for the passenger [business]. So from that point of view the mood is pretty positive,” he says. 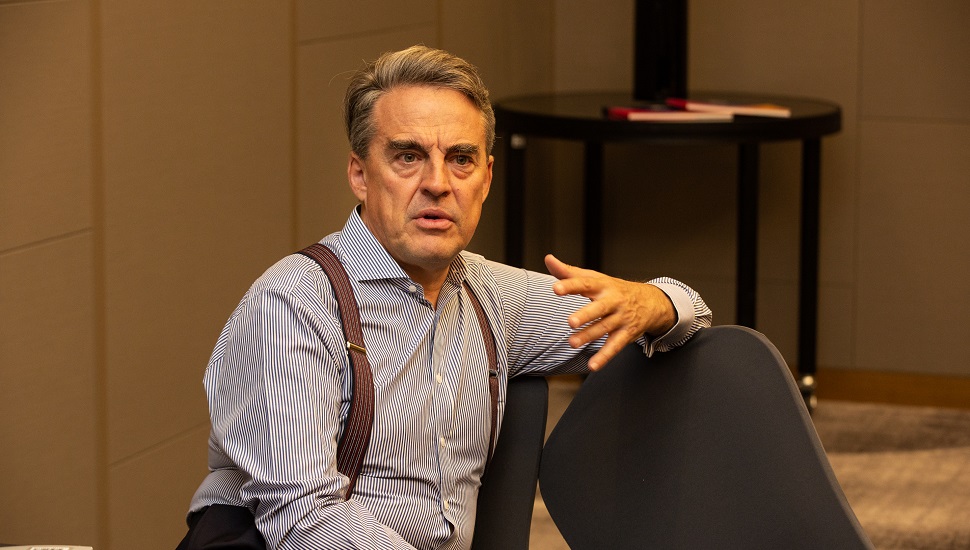 IATA figures released ahead of the AGM show passenger traffic growth of 4.6% over the first four months of this year – fractionally behind the extra capacity added. But a combined growth rate of 3.7% for March and April shows expansion has been slowing, alongside a 3% drop in air cargo traffic over the first fourth months of the year.

“The headwinds we flagged when we disclosed our outlook six months ago are there,” notes de Juniac. “So the consequences of trade wars, the protectionist measures, the increase in oil price and in some costs, they have triggered more difficult economic conditions, and our members are living with these more difficult conditions and the impact on their profitability.

“Already we have seen the first quarterly results published, especially in Europe and in Asia, were below last year,” he says, noting that some of the recent airline collapses in those regions illustrate that conditions have become tougher.

Despite many of the geopolitical factors, such as the US-China trade war, being in play last year, de Juniac says their impact is only just becoming apparent.

“They were there but we were not suffering from the consequences of these measures. Now they are clearly impacting the financial situation, the market, the GDP growth,” he says.

IATA will provide its latest financial outlook for the industry during the AGM. Its previous outlook, issued in December 2018, projected a small uptick in collective industry net profits to $35.5 billion in 2019.

Further factors impacting the industry include the fallout from the grounding of the Boeing 737 Max in March, following two fatal accidents involving the type in a matter of months.

“We have faced some unexpected and tragic events following the two crashes that have put the spotlight on safety, and we have to do everything to restore confidence on safety.

“Our accident rate is much better than it was five years ago and it is a permanent improvement,” says de Juniac. “But clearly these two accidents, the conditions under which these accidents have happened, have raised questions on the design of aircraft, certification processes, the entry into service, so we have to absolutely restore confidence.”

In particular, the phased grounding of the aircraft by different national and regional regulators raises wider certification issues.

“If you are in the shoes of the passengers or the general public, it is difficult to understand why there is a progressive grounding,” states de Juniac. “Why you have authorities grounding it immediately and some are waiting to make the same decision. This type of misalignment – and lack of collaboration and co-operation among regulators – I think it is probably the biggest threat on our safety/certification system.

“We have to be clear on what we think is needed, from the airline point of view, to manage safely the re-entry into service of the aircraft. What we say is we need strong collaboration between regulators, full transparency of the process and total alignment between regulators,” he continues, noting the importance of mutual recognition of certification being in place. “If we are heading into a system where you have one certification process per country, that for us would be the worst possible outcome,” he adds.

IATA recently convened a summit with operators in Montreal – on the same day the FAA completed a similar exercise with regulators – to identify the priorities for airlines on the re-entry into service for the aircraft. “We are aiming at having another meeting, including the operators, regulators and manufacturers, in the coming five to seven weeks to assess the situation and clearly identify what still needs to be done,” says de Juniac.

Another key issue flagged by de Juniac is the environment. While 2019 has been a notable year, given it marked the start of the recording of emissions in line with the planned roll-out of CORSIA, the airline industry’s environmental credentials remain in the spotlight amid various new green tax initiatives and heightened pressure-group action in Europe.

“There is clearly an increased pressure to reduce our CO2 emissions – it’s not just to stabilise, but to reduce,” says de Juniac, noting momentum, for example, from the “flight shame” campaign in Sweden.

“We have to work on our programme to fulfil our commitments – so, more efficient technologies, optimisation of operations, and implementation of CORSIA.

“But then we have also to explain more clearly, and probably outside aviation circles, what we have done, what we intend to do and what we have committed to, because it is the most ambitious programme of all industries. We can be proud of what we are doing.”

That includes the target of a 50% reduction in net aviation CO2 emissions by 2050, relative to 2005 levels.

Meanwhile, female representation – or rather the lack of it at the top level of airlines – dominated much of the coverage of last year’s AGM in Sydney, especially after an ill-judged joke from Qatar Airways chief executive Akbar Al Baker overshadowed the closing press conference.

De Juniac says improving female representation at the highest level is unlikely to happen overnight. “We have a pretty big challenge in front of us, because we clearly have a deficit of women, especially in the executive positions,” he says.

“So we are working to identify the key elements and gaps to fill, and we are working with all our members to try and improve this situation. It is not a short-term issue. It will last probably for a decade, but we have to constantly improve year after year.”