Alicia Cooke, an employee of Bahamas fixed-base operator (FBO) Cherokee Aviation, weathered much of Hurricane Dorian trapped with her family in the hallway of their Abaco home, holding shut a door, praying the wind and storm surge would not take them away.

Alicia Cooke, an employee of Bahamas fixed-base operator (FBO) Cherokee Aviation, weathered much of Hurricane Dorian trapped with her family in the hallway of their Abaco home, holding shut a door, praying the wind and storm surge would not take them away.

“It was absolutely terrifying – when you can actually feel a concrete house shake and watch the water rise to your second storey,” says Cooke, whose father started the operation in 1987. “The roof was ripping off and my family and I were trapped in a hallway, holding the door shut until the eye came.

“We just prayed that the roof would hold, and prayed for daylight,” adds Cooke. “My family and I lost everything, and all of our homes.”

Cooke is resident of an island and member of an aviation community turned upside down by Dorian, which in early September walloped the Abaco islands and Grand Bahama Island as a Category 5 storm with sustained winds up to 161kt (298km/h).

It marked another devastating storm for a region still recovering from a string of hurricanes that hammered the Caribbean in 2017.

Pegged as the strongest hurricane ever to hit the Bahamas, Dorian devastated the islands and largely ruined the region’s three primary airports: Marsh Harbour and Treasure Cay in the Abacos, and Freeport on Grand Bahama.

In the year before the storm, airlines operated some 19,000 flights and carried about 900,000 seats to and from Freeport, Marsh Harbour and Treasure Cay, according to Cirium schedules data.

Now the airports are essentially closed, with the exception of some domestic flights – a major hit to a community so dependent on tourist dollars.

In the last days of August, Dorian strengthened significantly and turned east toward the Abacos, an island chain running north-south about 150nm east off Florida’s coast.

On 1 September, Dorian came ashore with gusts up to 170kt in the Abacos at Elbow Cay, an island outpost anchored by a village of colourful cottages called Hope Town.

Private aircraft have long served Marsh Harbour and Treasure Cay, as have a handful of commercial airlines such as Bahamasair, SkyBahamas Airlines, Silver Airways, Republic Airways (which flies for American Airlines) and Envoy Air (which flies for Delta Air Lines).

Airlines traditionally flew only turboprops to the Abacos, but in recent years, Marsh Harbour had scored several regional jet flights, including Envoy Bombardier CRJ900s to Atlanta and Republic Embraer 175s to Charlotte.

All US flights are now cancelled. 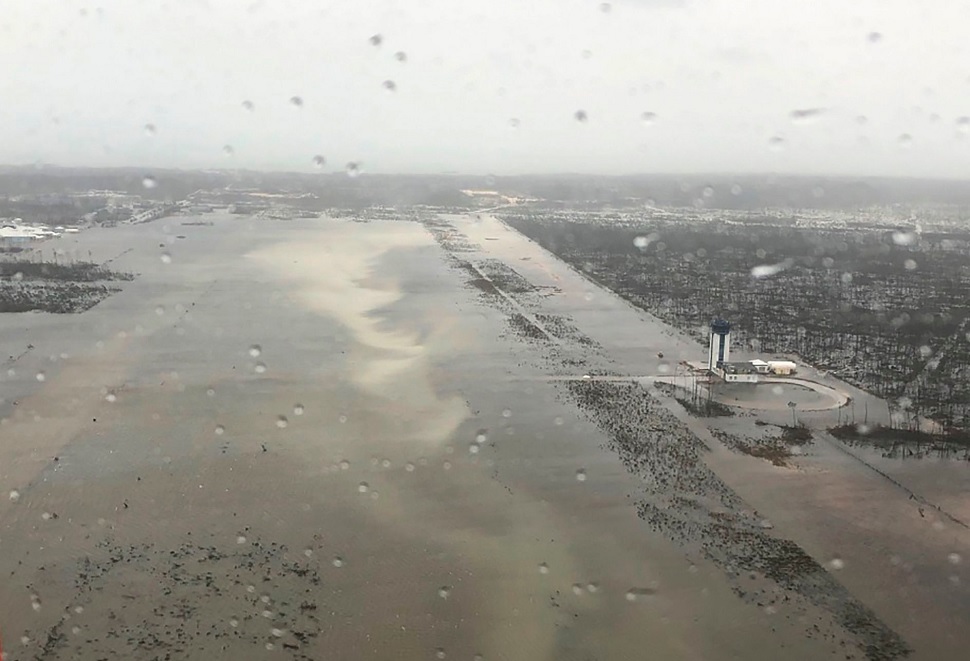 Marsh Harbour’s airport was still under water after Dorian passed

After leaving the Abacos, Dorian continued west across Little Bahama Bank and struck Grand Bahama Island, home to the tourist and business center of Freeport and its Grand Bahama International airport.

Eventually, Dorian crept away to the north on 3 September, ending a three-day assault. As of 11 October, the Bahamas National Emergency Management Agency listed the storm’s death toll at 61 people, and the majority of Abaco and Grand Bahama remains without electricity.

Communications with people on the ground remain difficult, but those reached by FlightGlobal describe ruin.

“The storm caught us off guard,” Edgecombe says. But he adds that the community is eager to rebuild, saying: “People are in good spirits.”

Privately owned Grand Bahama International suffered “complete destruction of all passenger and cargo handling buildings, administration and operations buildings, as well as damage to navigation aids and perimeter fencing”, the airport said in an 8 October statement. 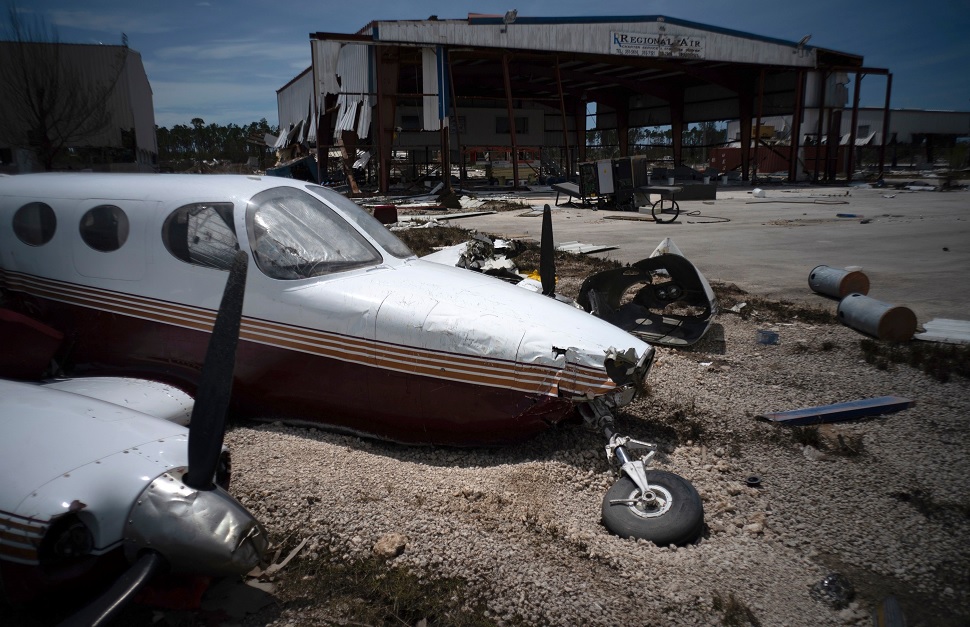 Immediately after the storm, the Bahamas Civil Aviation Authority closed airspace above the islands to all traffic except relief flights. The airspace quickly became “chaotic” and “saturated” with aircraft, some without transponders, according to reports from aviation operations blog Opsgroup. 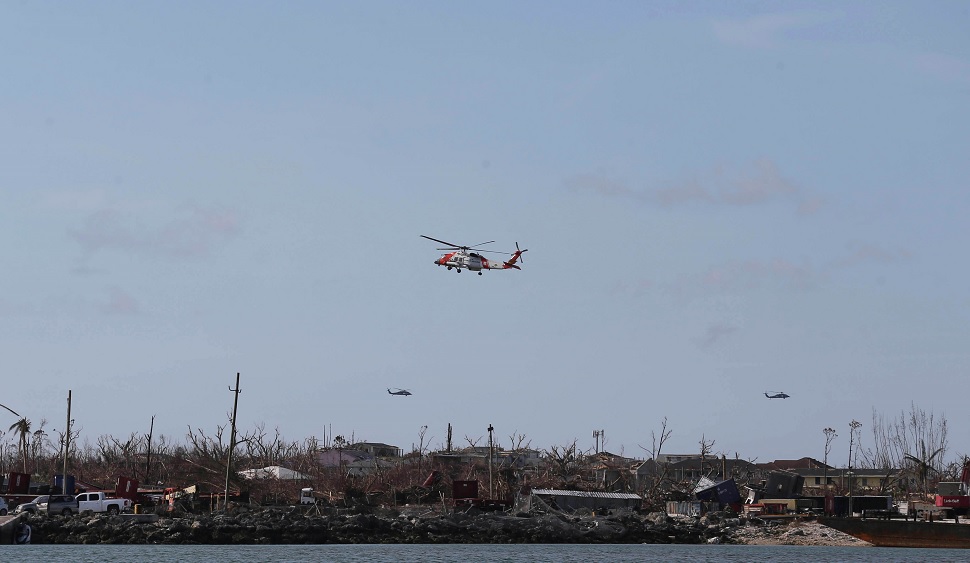 The aviation industry – companies big and small – stepped up, too.

Marsh Harbour FBO Cherokee Aviation and sister company Cherokee Air, a charter operator, arranged for 12 relief flights and co-ordinated many more. It also donated about 1,900 litres (500USgal) of aviation gasoline and some 83,000 litres of jet fuel to relief efforts, and used its Cessna Caravan to evacuate victims, Cooke says.

“We gave permission to Medic Corps and Samaritans Purse to use our facility as a mini hospital in the days right after the storm,” she says. “We also offered family homes that were not totally decimated to the groups, as well as vehicles.”

Delta Air Lines flew an MD-88 loaded with 4,700lb of supplies to Marsh Harbor on 8 September, then onward to Nassau carrying 72 evacuees, the airline said.

Fort Lauderdale-based Silver, which operates a large network of flights between Florida and the Bahamas, organised a fundraising effort and operated a relief flight to Freeport, it says.

Silver expects to resume flights to Freeport on 15 November, to Marsh Harbour on 15 December and to Treasure Cay on 15 February 2020, it says.

United Airlines operated a relief flight on 17 September carrying 100 aid workers from four organisations, 200,000 meals, 4,460 hygiene kits and 30,000lb of additional supplies, it says. The airline also launched a fundraising programme that had raised $638,000 as of mid-October.

American Airlines operated a relief flight on 3 September, delivering some 14,000lb of supplies to Nassau, and raised $184,000 in donations through the middle of the October, according to the carrier and its online donation portal.

“Unfortunately, our communications on the island are very limited,” says Cooke. “We lost our hangar, and one of our aircraft was in the hangar. My office was also lost.”

Cooke says Marsh Harbour’s new passenger terminal, opened in 2014, was badly damaged and that the control tower remains out of service.

“They brought in a mobile tower, but [it] is not operational at this time,” she says. “There are a couple commercial flights coming in, but we are having quite a bit of private and humanitarian flights.”

Grand Bahama airport’s staff were able to get their runway operational for relief flights starting on 5 September.

“Thanks to the valiant efforts of the nearly 100 airport employees and many others, runways and tarmacs were cleared from a massive amount of debris,” says the airport’s statement.

Grand Bahama waived all landing fees for humanitarian flights. Some private and domestic scheduled passenger flights have resumed there, including those operated by Bahamasair, Western Air and Flamingo Air. The airport is also accepting some international flights from countries other than the USA with “advance notice”, it says.

Infrastructure damage still limits Freeport to daytime operations under visual flight rules, but the airport is making repairs. It has installed temporary buildings to house administration workers and airline ticketing and baggage operations. The airport intends to demolish damaged structures after insurance assessments are complete, it says.

“The next focus will be on restoring the airport’s capabilities to accept and clear direct flights from the United States,” says Grand Bahama airport.

It is aiming for flights to Fort Lauderdale to begin in mid-November, subject to US government approval.

Meanwhile, the country’s other airports, which were south of the storm, remain open.

Those include the Bahamas’ prime aviation hub, Nassau’s Lynden Pindling International, and out-island airports such as those serving George Town, Eleuthera and Bimini.

Airlines and tourism boards are promoting travel to those places as a means of helping support the country’s recovery.

“The Bahamas is open,” the country’s tourism board said in a recent release. “Every trip… will help the country’s effort in rebuilding the affected islands.”