737 Max to be assembled in Renton on contract approval

The International Association of Machinists and Aerospace Workers has ratified a new four-year contract, ensuring the re-engined Boeing 737 Max will be built on the company's Renton, Washington final assembly line.

The contract was approved with 74% of machinists voting in favour of ratification, far in excess of the 50% plus-one vote required for approval, said District Lodge 751 president Tom Wroblewski.

Boeing praised the vote "that builds on an emerging spirit of cooperation and collaboration".

The agreement "reflects an effort on the part of the company and the union to find a better way to work together and achieve common ground", said Boeing Commercial Airplanes CEO Jim Albaugh.

The contract will grow the wages of the 31,000-strong machinist union membership by 2% each year of the four-year contract, adjust the health care contribution, continue pension plans and retiree benefits, and deliver a $5,000 ratification bonus, which was contingent on the contract's approval.

"It's a balanced agreement that makes us more competitive and ensures that the 737 - the best single-aisle airplane in the world - continues to be built by the people who know how to do it best," said Albaugh.

The agreement also establishes a joint council for Boeing and the IAM to regularly discuss issues on the workforce, market, competition and performance.

The existing contract, ratified in 2008 following a two-month strike, will be extended four years past its initially planned expiration in September 2012, providing labour stability for Boeing as it ramps up production by 40% across its commercial production lines.

Boeing holds more than 700 commitments for the Leap-1B powered 737 from more than nine customers and expects to receive its first firm orders by the end of the year after establishing prices for the aircraft.

With the contract's approval, the IAM is expected to request the US National Labor Relations Board to drop its complaint against Boeing, citing the resolution of its previous grievances with the company's selection of North Charleston, South Carolina as the site of its second 787 assembly line. 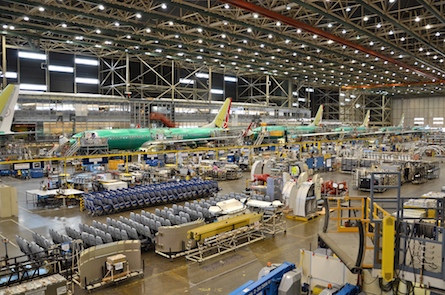