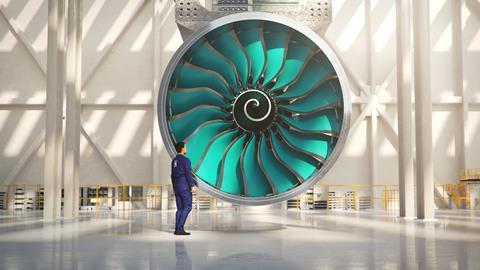 “We intend to do flight testing in Q3,” Simon Burr, director of engineering and technology tells FlightGlobal. The tests will run 100% SAF in a Trent 1000 engine, one of the four powerplants on the 747-200, the others being RB211s.

Over the past few months, Rolls-Royce has conducted ground tests on a Trent 1000 and a Pearl 700 turbofan using 100% SAF. The SAF was produced by World Energy at its plant in California, sourced by Shell Aviation and delivered by SkyNRG.

The Rolls-Royce testing programme is aimed at giving the industry confidence that modern turbofans can successfully run with 100%, says Burr. It is “part of a broader advocacy to help the industry forward on its sustainable journey”, he explains.

Today, airlines can use up to a blend of 50% SAF in commercial operation with the other 50% being regular fossil-based jet fuel. The upper limit of 50% SAF is the maximum allowed under current fuel certification standards using current production methods or pathways.

There have been concerns, for example in the aromatic content of SAF, around whether it could be used as a 100% “drop-in” replacement for regular jet fuel. Aromatic content is important because it can affect aircraft wing seals, which could swell leading to possible fuel leakage.

The Trent tests showed SAF is not only drop-in, but actually has better properties compared to regular jet fuel. “Preliminary analysis found NOx, CO and UHC (unburnt hydrocarbons) were similar or slightly better than using Jet A-1,” says Rolls-Royce. “nvPM (non volatile particulate), previously measured as smoke, were much improved as expected due to lower aromatic content.”

There were “no issues and nothing identified that would be detrimental by incorporating 100% SAF”, says the engine maker.

“SAF is not just a drop-in; it is actually advantageous,” says Burr.

In addition to the Q3 SAF flight test, Rolls-Royce is planning that the first ever run of its advanced UltraFan powerplant will feature 100% SAF, says Burr. This is expected to take place at the beginning of 2022.

SAF is slated to be a critical component of the airline industry reducing its carbon footprint, with many airlines committing to so-called net zero decarbonisation targets by 2050. There are several ways to make SAF using a variety of raw materials including biomass and municipal waste.