Flydubai will operate the initial flight from Dubai to the Pakistani city of Sialkot, but the aircraft will subsequently be used for other destinations on the carrier’s network.

The UAE’s General Civil Aviation Authority lifted restrictions on the type in mid-February.

Flydubai has 14 737 Max jets and the carrier says five of them – four Max 8s and a single Max 9 – have secured regulatory approval to re-enter service.

It other nine Max aircraft will return to flight “over the coming months”, the airline adds. 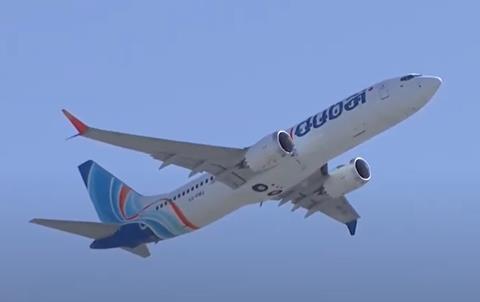 “Passengers will be notified in advance of travel if their itinerary now includes a flight that is scheduled to be operated by a Max,” says Flydubai.

Chief executive Ghaith Al Ghaith describes the aircraft as being “integral” to the carrier’s fleet.

“We are confident in the aircraft and its capabilities,” he says, praising the “diligent work” carried out by the airline’s personnel to support the General Civil Aviation Authority’s clearance.

Flydubai has ordered over 250 Max jets, according to Boeing figures. It will become the latest airline to return the aircraft to service following a two-year grounding which resulted in an extensive recertification process.

Chief commercial officer Hamad Obaidalla says the carrier will “look forward” to re-introducing the twinjets which are configured in a two-class layout including lie-flat beds in the business-class cabin.