SmartLynx to add another pair of A321 freighters in early 2022

Wet-lease specialist SmartLynx is introducing another pair of Airbus A321 freighters to its fleet early next year, as it seeks to take its total to eight by the end of 2022.

SmartLynx will receive the aircraft, both registered in Malta, through leases from Cross Ocean Partners, a financial firm whose activities also include managing aviation assets, mostly late-life commercial aircraft.

The additional jets are the 1998-built MSN775, fitted with CFM International CFM56 engines and originally delivered to the UK’s Airworld but most recently operated by Russia’s Ural Airlines.

SmartLynx identifies the other as MSN1204 which was delivered new to All Nippon Airways in 2000 and subsequently operated by Air Astana. The aircraft is powered by International Aero Engines V2500s.

US-based Precision Conversions is modifying the twinjets and SmartLynx expects them to enter service in the first quarter of 2022. 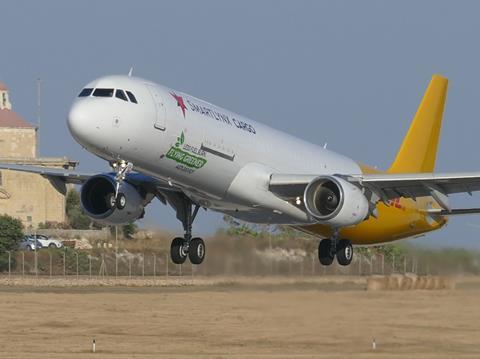 SmartLynx says it is rapidly expanding the A321F fleet in order to become the largest operator of the cargo variant in the near term.

“The A321 freighter has the highest revenue payload and the most versatile, customer-friendly features in today’s cargo marketplace,” it says.

SmartLynx already has two A321Fs in its fleet, brought into operate on behalf of express freight firm DHL, and chief executive Zygimantas Surintas says the extra aircraft will help “consolidate the company’s position at the forefront of cargo carriers”.

“We are already witnessing a dramatically increased market interest for this aircraft type,” he adds, pointing out that the company has made a “conscious decision” to follow the market demands for “more sustainable air transportation”.

Cross Ocean Partners aviation investment strategies head Brandt Wilson says SmartLynx has demonstrated “early recognition” of the “critical role” that the A321F will play in the logistics market, and that this “speaks to the company’s strategic vision and bold tactics”.