ANALYSIS: Preparing for a connectivity revolution

As the world becomes more connected than ever, access to wi-fi is increasingly seen as an important resource in many people’s lives. More and more airline passengers are expecting not to have to remain incommunicado during their time on board an aircraft.

This year will see the launch of Inmarsat’s widely anticipated Ka-band satellite-based global broadband service, GX Aviation, following the successful deployment of the second satellite in the constellation in early February. Meanwhile, the launch date for the satellite operator’s pan-European hybrid air-to-ground/S-band in-flight internet service is targeted for 2016.

These are exciting times in this rapidly evolving market, which presents both opportunities and challenges to airlines as they grapple with the challenge to meet growing demand for connectivity while ensuring their hefty investments pay dividends.

Inmarsat, which aims to launch its GX service early in the second half of this year, describes the high-speed offering as “the fastest broadband in the skies”. A network of three satellites will provide seamless global coverage, meaning that “as you fly across the time zones, your passengers will have a continuous, consistent service as traffic is handed seamlessly across each spot beam, and from one satellite to another”, says the company.

Vietnam Airlines last September became the first airline to sign up for GX Aviation when it selected US-based connectivity provider Gogo to install and operate the service across the majority of its ordered Airbus A350s and Boeing 787s, the first examples of which are due to be handed over to the carrier this year. Inmarsat Aviation president Leo Mondale says that more airline customers will be announced “very soon”. 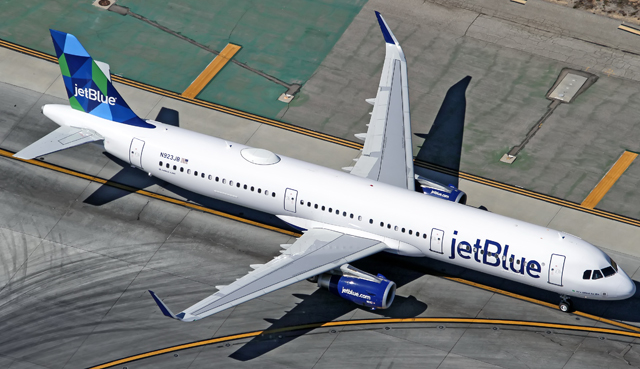 Mondale says there has been an “explosion in demand” for in-flight connectivity, “from the cockpit to the cabin and everywhere in between”, but he believes the biggest opportunities for making the best use of it will be in the cabin.

“The in-flight connectivity market is only going to grow. While there will be growth in demand to supply connectivity for communications to the cockpit for enhanced safety and aircraft management, we see the real opportunity is in the cabin,” says Mondale. “Passengers expect to be able to connect in the air as they do on the ground.

“The opportunities in the cabin include passenger communications, for example, and connected crew tablets, as well as inventory management, crew rostering, credit card payments and telemedicine.”

In the USA, the market for in-flight connectivity has taken off much faster than in Europe and passengers there are widely accustomed to staying connected in the air via satellite-based or air-to-ground systems. But Europe is catching up fast and will soon have its own hybrid air-to-ground/satellite-based network, courtesy of Inmarsat.

The satellite operator last June announced plans to deploy an EU-wide integrated aviation connectivity network and said it was in “advanced discussions” with British Airways to be a launch customer. Mondale says the company “is in discussions with a number of airlines, as well as continuing our negotiations with BA”.

Inmarsat recently announced that it had partnered with Alcatel-Lucent to develop the ground infrastructure component of the network. On the satellite side, the company is working with EU member states to obtain the necessary permits to enable it to use the S-band satellite, known as Europasat, for its hybrid aviation network.

“We already have authorisations from 23 member states and are progressing well to meet our target to launch the network in 2016,” says Mondale.

“Our projections are that Europe will rapidly become a significant market for in-flight connectivity so will require a lot of capacity,” he adds, noting that Inmarsat’s hybrid solution is well positioned to meet that demand. “The real advantage sits in the fact that the satellite and air-to-ground links complement each other, providing the high level of capacity required over the high-density traffic routes of Europe.

“Because we manage all aspects of the network, we can provide consistently high-quality service, whether using the EU aviation network over the EU or swapping seamlessly on to GX for intercontinental flights.”

It is not just network airlines that have signed up to or expressed an interest in offering in-flight wi-fi. In the USA, JetBlue Airways and Southwest Airlines both provide connectivity to their passengers, through a ViaSat Exede Ka-band satellite service and Global Eagle’s Row 44 Ku-band product, respectively.

Meanwhile, low-cost giants EasyJet and Ryanair appear to be waiting in the wings with a view to introducing in-flight wi-fi when the costs come down. EasyJet chief executive Carolyn McCall said during the carrier’s full-year financial results conference in November that in-flight wi-fi “is not an area necessarily to be a first-mover on, but when it becomes a lot more mass-available at the right price and… when it is of better quality then I think all of us will have it”.

Similarly, Ryanair is keen to introduce in-flight wi-fi as soon as it becomes less cost-prohibitive. Ryanair chief technology officer John Hurley says the Irish budget carrier is looking “big time” at offering wi-fi, but that this will depend on the implementation and running costs of these systems coming down. To install a satellite-based onboard connectivity system, aircraft must be retrofitted with antennas, which Hurley says create an extra “1-2% drag”.

Hurley says the pan-European hybrid satellite-based/ATG service being developed by Inmarsat is “one possibility” for the airline.

If and when Ryanair introduces in-flight wi-fi, it is likely to be offered on flights with a stage length of two to three hours, because “on a 30min hop from Dublin to Liverpool, there would be no point”, says Hurley.

As far as pricing goes, the Ryanair CTO says he is “not fully sure” whether the carrier would charge passengers for the service. “We have to work out the cost to fit our aircraft out,” he says, adding that one possibility would be to follow JetBlue Airways’ example of offering certain basic services – such as email and other light internet platforms – for free and charging for more bandwidth-heavy services.

Ryanair could take a leaf out of Vueling’s book and find a partner that will provide in-flight connectivity at no charge. The Barcelona-based carrier last year signed such an agreement with Spanish telecommunications company Telefonica, satellite operator Eutelsat and Thales unit LiveTV. Hurley says the Irish carrier is “in talks” with some of the same partners.

In the meantime, Ryanair will soon begin trialling a free-to-access wireless in-flight entertainment service that will stream content from an onboard server to passengers’ own electronic devices.

The airline will offer passengers on certain flights the opportunity to stream TV shows and films to their own smartphones, tablets and laptops this summer. If the trial proves successful, the service “will be rolled out later in the year”, says Hurley.

As many airlines are discovering, the eventual widespread introduction of in-flight wi-fi appears to be a foregone conclusion. As Ryanair’s Hurley puts it: “The reality is that the world is going wi-fi. It’s becoming as important as running water for most people.”