ANALYSIS: As BA ends free meals, US airlines bring them back

When in 2010 Continental Airlines became the last of its peer group to stop providing free meals to short-haul, economy-class passengers, it was seen by many as the end of an era.

The same sentiment could soon apply across the pond, following British Airways’ announcement in September that it had teamed up with high street stalwart Marks & Spencer to start selling food and drink to passengers seated away from the pointy end of the aircraft.

BA’s new buy-on-board service means economy-class passengers on domestic and short-haul services will no longer be able to avail themselves of a complimentary tea, coffee or light snack. If they want refreshments, they will have to pay for them.

In the USA things have just come full circle, with United Airlines and American Airlines announcing in 2015 and 2016 that they would re-introduce complimentary drinks and snacks on their domestic networks.

United brought back free snacks amid much fanfare, including a social media campaign using the hashtag #GetTheStroop. This refers to a Dutch caramel-filled waffle called the Stroopwaffel which the carrier now hands out to economy class passengers to go with their complimentary coffee on early morning flights.

On announcing the return of the free snack in late 2015, United vice-president food services Jimmy Samartzis said the airline was “refocusing on the big and little things that we know matter to our customers and shape how they feel about their travel experience”.

Delta Air Lines went a step further earlier this year when it started serving complimentary meals in economy class on a number of transcontinental routes. In March the carrier started serving free meals in its economy class cabins on flights from New York JFK to Los Angeles and San Francisco. From 24 April Delta will expand the complimentary meal service to 10 other domestic routes from Seattle, New York, Boston and Washington DC.

Meal offerings will range from a honey maple breakfast sandwich to a fruit and cheese plate, to a breakfast bar on overnight flights. Delta boasts that the move means it is now “the only US carrier to offer complimentary fresh meals from nose to tail on select coast-to-coast routes”.

This about-turn follows a difficult period for the major US airlines, several of which were forced to file for Chapter 11 bankruptcy protection in the wake of the 11 September 2001 terrorist attacks. With the airlines’ bottom lines hurting they had to find new ways of saving money, and complimentary onboard meals and snacks were an early casualty.

In Europe, meanwhile, the big unanswered question today is whether other so-called full-service airlines will follow BA’s lead and ditch free refreshments on their short-haul flights.

BA is putting a positive spin on its new buy-on-board service, which it says was a response to customer demand for “more choices that reflect what they would normally select when out and about”. 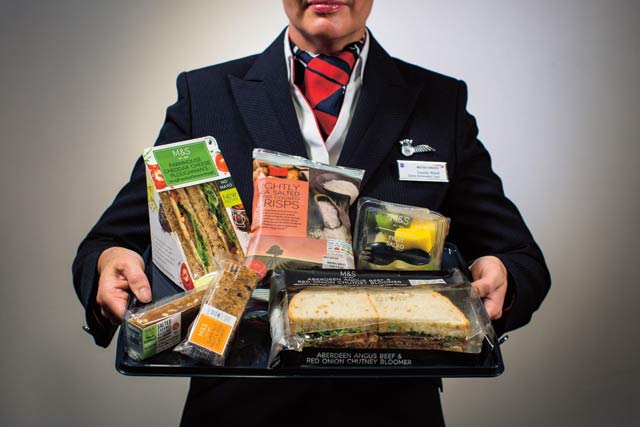 Chief executive Alex Cruz said on announcing the move: “I firmly believe what we are delivering breaks the mould and sets a new standard in short-haul catering. We will be providing a selection of premium brand, fresh food options and a menu that will be refreshed on a quarterly basis.”

The new M&S Food on the Move service was launched on 11 January in BA’s economy cabin on short-haul and domestic flights from London’s Heathrow and Gatwick airports, and it will be rolled out on flights from London City and Stansted by this summer.

Each item on the bespoke menu costs less than £5 ($6.20), with options ranging from yoghurts and fruit salads to crisps and nuts, to hot and cold sandwiches. A good old cup of tea will set you back £2.30. Marks & Spencer will provide the food for the service, while drinks will be supplied by Tourvest Inflight Retail Services. To speed things up, payment for the items must be made by credit or debit card, or by using Avios points.

British Airways’ head of customer Abigail Comber says demand from passengers for the new catering service has been “significantly higher than predicted”.

“Customers really appreciate the choice and quality of the M&S range available. In the first two weeks they bought more than 270,000 items, including 11,000 bacon rolls and 4,000 bottles of Prosecco,” says Comber.

“This is also just the start of M&S On Board. Our plan is to listen to our customers about what they love and would like to see more of and we’ll adapt what we serve based on that. We also hope to have some special seasonal M&S options on flights too.”

IAG chief executive Willie Walsh admitted on 24 February that uptake had so far lagged behind longer-established buy-on-board models at BA’s sister airlines – Aer Lingus, Iberia and Vueling – and said the BA service remained a “work in progress”. But he emphasised that the buy-on-board service would be a “permanent feature” of the airline’s short-haul business.

BA has gambled on its belief that food is less important than ticket price when customers choose an airline for a short-haul flight, as Comber explains: “Customers booking short-haul flights are mainly focused on price and ease, and those elements remain extremely competitive for our customers.

“The short-haul industry is fiercely competitive. We know food isn’t a driver for customers when making a booking. Our feedback from customers has been that they’d rather be able to buy high-quality food on board from a high street name they recognise and enjoy.”

BA’s announcement follows an earlier move by the airline in 2009, when it pared back its onboard catering service by replacing the complimentary sandwich handed out to passengers on flights with a duration of less than 2.5h with a small snack, in a bid to save £22 million a year. The airline has not disclosed how much it hopes to save with its latest catering initiative. Comber says this is “commercially sensitive information”, adding that “the cost of the existing service hasn’t been reflected in customer satisfaction”.

European low-cost carriers such as EasyJet, Ryanair and Norwegian have charged passengers for food and drinks since their inception. However, it is more of a mixed picture among the continent’s network airlines.

BA is not alone in adopting the low-cost airline model of selling food on board. The carrier’s IAG stablemates Iberia and Aer Lingus both have a buy-on-board service, as do SAS Scandinavian Airlines and Finnair, although the latter still provides complimentary tea, coffee and blueberry juice, which it describes as its own “signature drink”.

Finnair head of in-flight product Maarit Keränen says: “In 2014 we introduced Sky Bistro, our buy-on-board service for short-haul flights. Our customers were asking for more choice – one type of snack or meal does not suit all – and we responded to this by introducing a selection of fresh snacks and small meals that customers can choose from.”

“The menu changes periodically, and we naturally closely follow customer feedback on it. Overall, the response from our customers has been positive, and we continue to develop our Sky Bistro offering.”

Finnair’s short-haul, economy-class passengers also have the chance to order a meal ahead of their flight. Keränen says that “at the moment we don’t have plans to make any big changes” to the Sky Bistro service.

Many of Europe’s other biggest and best-known full-service carriers – including Air France-KLM and Lufthansa – still provide complimentary food and drinks in their short-haul economy cabins and have so far shown no signs of changing their strategies.

KLM director of product management Wim Spelt says the Dutch carrier has no plans to introduce a buy-on-board service. “We will keep on giving free snacks and drinks. Why? Because our customers still appreciate the service we give,” he says.

KLM offers a different type of snack depending on the length of the flight. For flights with a duration of up to 1h, passengers can expect a complimentary snack which Spelt says typically includes “a sandwich, a cookie and some water”. On flights up to 2.5h the airline provides a “more extensive” snack, which could include “two sandwiches”, while economy-class passengers flying for more than 2.5h are given a “hot item” free of charge.

The airline has previously looked at introducing a buy-on-board service but opted against it. “In the past KLM has had discussions on, are we going to ask for paid options? And the answer was no,” says Spelt. “Ten years ago we looked at this system but the problem is, you never know how many passengers will use it.”

Another issue to consider, says Spelt, is the additional time it would take cabin crew to sell and serve a choice of items to passengers. KLM believes that passengers appreciate the personal attention that accompanies handing out free drinks and snacks. To offer the same level of attention in a scenario where passengers are individually choosing items, Spelt wonders whether “we would have to add cabin crew because there is not enough time to serve everyone”.

BA’s Comber admits that “our crew had to become familiar with delivering the new service on flights” but says that “now it has been up and running for a month the service is going well”.

In order to minimise the amount of food that is wasted, KLM has examined “a lot of data” which has enabled it to ascertain that, for example, there might be a 100% take-up of breakfast on a short-haul morning flight to London but the flight back to Amsterdam in the evening typically sees a lower meal take-up of about 80%.

“We look very closely at waste because that’s money,” says Spelt, adding that cutting waste is also in line with the airline’s corporate social responsibility values.

The potential for airlines to save money by cutting back on their catering services was summed up in the 1980s by former American Airlines chief executive Robert Crandall’s now infamous discovery that the carrier could save $40,000 a year by removing a single olive from each passenger’s salad.

The low-cost carrier revolution saw airlines evolve this theory a step further with the realisation that they could bring in ancillary revenues by selling food and drinks to passengers. Since that revolution took hold, the lines between what constitutes a budget airline and what can be classed as a full-service operator have become increasingly blurred.

The decision by some legacy carriers to start charging for previously complimentary meal services blurs those lines even further. The question for airlines that have chosen to embark on that journey is whether the move is perceived by passengers as being the final nail in the coffin of what was once a simple choice of flying with or without frills.

The fact that the US airlines have been there, done that and are now reintroducing free meals and snacks could perhaps provide an early clue to what will happen in Europe.