The set-up in August was like thousands of others practiced in the skies of the Joint Pacific Alaska Range Complex (JPARC), an unpopulated US military training area roughly the size Uruguay. Two Lockheed Martin F-16s paired with two F-22s in an air-to-air scenario against four aggressors, which also happened to be F-16s. The “blue air” team, which included both F-22s, dominated as expected, but an aggressor F-16 managed to pick off an F-22 in one engagement. Training mission: accomplished.

But something was very different in this engagement. All six F-16s were visible in the sky, but not the two F-22s. For the first time, they had entered a real-world training engagement virtually. The two F-22 pilots were flying simulators at Joint Base Elmendorf-Richardson in Anchorage. Instead of using a programmed graphical database of terrain, the full-motion simulators were connected to a real-time, synthetic visualisation of the real-world F-16 engagement over the JPARC.

Weeks before the scenario took place, the developer of this live and virtual training experience, Northrop Grumman, had some trouble persuading pilots that such a real-time merger of reality and simulation was possible.

“When we briefed face to face with them you could see a lot of raised eyebrows. There was a lot of doubt that it could be done,” says Phil Guy, a Northrop business developer and former F-22 and F-16 pilot. “The feedback coming back in was really one of amazement.”

It is also just the beginning of the US Air Force’s potentially multibillion-dollar ambitions for revolutionising training technology. Largely driven by the pending influx of hundreds of US and international F-35s, the USAF is exploring breakthrough technologies for enabling “live-virtual-constructive” (LVC) training on a grand scale.

Ideally, an LVC scenario would make air combat training more realistic by blending hundreds of platforms, weapons and sensors into a shared synthetic environment, which would otherwise be too expensive and complicated to assemble on a training range with only live assets. Imagine a training scenario with a multinational formation of F-35s, command and control aircraft and tankers flying mission rehearsals together. Arrayed against them are an assortment of accurately portrayed ground and aerial weapons systems with the full spectrum of kinetic and electronic attack options.

To fully realize this vision of air combat training will take several years, to allow the development of a new LVC waveform capable of handling the vast amount of data exchanged at various levels of classification. Then, even more time and investment will be needed to integrate the waveform on a global fleet of allied air combat systems. As the JPARC scenario in August shows, however, the USAF is already employing LVC technology in training, albeit within the constraints of existing datalinks and waveforms. 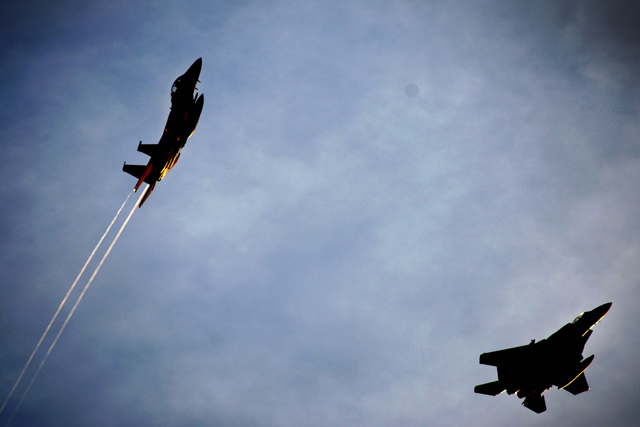 The current state of the technology was visible in the Red Flag-Alaska 17-01 training exercise, which was conducted at the JPARC in early October. By using LVC technology, the USAF connected live aircraft with simulators for aircraft such as the Boeing KC-135 Rivet Joint, Northrop E-8C JSTARS, Rockwell B-1, Boeing B-52 and F-16s. Northrop calculated the cost benefit of blending live and virtual assets – and it was substantial. “If those airplanes had flown in those two weeks, it would have cost more than $10 million in [operations and maintenance] costs,” Guy says.

The LVC experience was possible because of a decade of investment by the USAF, which started by connecting full motion simulators distributed around the world on to a single global network. The Distributed Mission Operations Network (DMON), developed and managed by Northrop, has allowed USAF fighter pilots in simulators in Europe to fly virtual mission rehearsals with simulators stationed in the USA. In 2013, the USAF tasked Northrop with upgrading the network by connecting the simulators with vast training range complexes like the JPARC in Alaska.

In DMON 2.0, a synthetic copy of the live training range is created by software. This virtual range essentially makes every training scenario a vast computer game, with positional data of live aircraft tracked using existing datalinks, such as Link-16, and checked against other sensors, including ground-based radars. Multiple aircraft simulators can be connected into the virtual range software, which communicates their positional data to the real assets using Link-16. The technology Northrop uses to blend all of these various data streams and software formats is called LEXIOS.

LVC capabilities today are growing, but they are insufficient to meet future demand. Within a decade, Lockheed expects to have delivered more than 1,000 F-35s globally, including hundreds to the USAF alone. The introduction of a fifth-generation fighter in such vast numbers will pose a challenge to an already strained air combat training system. By combining supersonic speed, radar stealth and advanced onboard sensors, F-35s may find it difficult to train effectively against older aircraft types. This issue became apparent with the USAF’s comparatively tiny fleet of 180 F-22s, says David Scott, Lockheed’s vice-president of training and logistics business development.

The USAF boasts that the F-22 has attained air-to-air kill ratios in mock combat on the order of 80:1 or even 100:1, but that impressive record also suggests a weakness in the training system. “It means that [the F-22] is not being fully pushed to its limits and somebody who is flying as Red Air really doesn’t get any training out of it,” Scott says. “They fly into engagements with F-22s and they are killed before they even see where the F-22 is.”

So far, the F-22 fleet’s small size has made the problem manageable, but it cannot be sustained as hundreds and even thousands of F-35s arrive in service. Such aircraft will need the assistance of LVC technology to create realistic threats to train against in air, ground and cyber domains.

Lockheed is now under contract with the USAF to integrate domed simulators developed for the F-35 into the DMON, Scott says. The schedule to complete that integration is still under discussion within the USAF. When that occurs, however, it will be only the first step to allowing the F-35 to participate in LVC. In addition to simulator integration, the F-35 also requires the USAF to develop a new waveform that can handle the data, latency and classification level required for LVC.

Like all previous USAF fighters since the mid-1970s, the F-35 comes equipped with a system that transmits the aircraft’s positional data during air combat training events. In previous fighters, the distinctive Cubic P5 combat training system (CTS) pod is mounted on a wing station during exercises. The podded solution does the job for fourth generation fighters, but a wing-mounted store on the F-35 would betray the aircraft’s stealth signature. So Cubic developed the P5 internal subsystem for the F-35.

There are also limitations with the P5 waveform itself. Northrop’s Guy notes that the P5 has a high-capacity downlink, but an extremely limited uplink. In an LVC environment, Northrop’s LEXIOS needs to transmit volumes of positional and sensor data up to each live aircraft in order to keep everyone on the same page. Right now, the system relies on Link-16 to transmit the required information, but neither Link-16 nor the P5 is able to handle the volume of data from airborne sensors, let alone the capacity required as F-35s enter training ranges in large numbers. Moreover, neither Link-16 nor the P5 can handle multi-level security access.

So the USAF is in the early stages of developing a new waveform dedicated to LVC, says Tim Welde, a senior business development manager for Cubic.

Cubic is participating in a technology demonstration launched by the Air Force Research Laboratory with Massachusetts Institute of Technology’s Lincoln Laboratory. The Secure LVC Advanced Training Environment (SLATE) is 13 months into a three-year demonstration phase, Welde says. The goal of the demonstration is supply the data the USAF needs to set the performance requirements for an LVC waveform. Instead of acquiring a proprietary standard, the USAF plans to own the intellectual property supporting the waveform, so industry would play the role of applications developers, Welde says.

By fielding a new waveform, LVC training for air combat missions will be transformed compared with the technology available today. In addition to passing positional data, live, simulated and constructive assets participating in a mission will also be able to share sensor information, such as information from radar, radar warning receivers and electronic warfare. In any training mission, the goal is to make the environment so realistic that the participants are able to suspend disbelief in the fictional premise, Welde says. That is harder to do without integrating sensor data into the LVC environment.

But getting to that end-state won’t be cheap. The cost of developing a new waveform and associated software and hardware is only the beginning. New pods must be procured and then installed and qualified on the fourth-generation fighter fleet. The P5 internal subsystem for the F-35 must be replaced with a new LVC subsystem, Welde adds. The LVC capability also requires reprogramming the fighter’s operational flight programme.

It is also possible that the LVC waveform alone is not enough to achieve the USAF’s vision for future air combat training. Although the LVC waveform can capture data from internally embedded sensors, such as a fighter’s radar and EW systems, it may not be able to connect direct to mounted sensors, such as targeting pods, says Guy. The limitations of the waveform could make it an 80% solution, he adds.

Such technology will not be available for at least seven or eight years in any case, but industry officials are developing ways to make more use of existing LVC systems. For example, Northrop is working on a way to allow LEXIOS to handle data with multiple levels of classification. That could help integrate F-22s and F-35s more into LVC training, as well as bringing in international participants.

Cubic, meanwhile, is developing a new technology for specialised Red Air aircraft. Several private companies, such as Dynamic Aviation and ATAC, provide fleets of third-generation fighters, such as Douglas A-4s and Northrop F-5s, for air combat training with the USAF and Navy. Due to the age of these aircraft, many are not equipped with radars and other sensors. They do, however, carry P5 CTS pods, Welde says.

These pods carry the positional data of the Blue Air forces involved in the same training scenario. So Cubic is working to transmit the data from the pod to a kneeboard-mounted tablet, giving the Red Air pilot situational awareness as if the aircraft had a radar or other sensors, Welde says. The so-called Bandit Board could also be used by the Red Air pilot to command the P5 pod to emulate a radar signal, giving the Blue Air forces another training option.