As delegates gather in Adelaide for the World Routes convention, several of Australia’s airports will be highlighting their major investments in infrastructure, but may also face questions about the slowing rate of travel and disputes over charges.

Major airports at Brisbane, Melbourne, Perth and Adelaide are now reaching 30 years since they were privatised. Over that time, most have invested in a series of terminal upgrades that have helped to open new revenue streams, mostly in the retail space. Now, however, new runways and terminals that will provide long-term capacity are either commencing or heading towards their final investment decision points.

The biggest project will be government-developed Western Sydney airport. To be named after pioneering aviatrix Nancy-Bird Walton, the airport is scheduled to open in 2026 and will provide capacity to handle 10 million passengers per year initially, with a plan to gradually expand it to an annual capacity of 82 million by 2063.

Earthworks are underway and design contracts awarded, which are pleasing signs that the airport should be able to stick to its scheduled opening date. By 2026, it is expected that Sydney’s existing Kingsford-Smith airport will be at capacity through most of the day, largely due to its 80 movements per hour cap and its 23:00-6:00 curfew.

Outside of Sydney, Brisbane airport will commission its new parallel runway in 2020, a project that is seen as critical to solving congestion problems during peak periods, and leaves room for further growth. That is part of a A$3.8 billion ($2.6 billion) infrastructure programme that will meet its expected growth out to 2034.

Perth airport is lining up to build a new parallel runway that, subject to negotiations with airlines and demand, is expected to be operational between 2023 and 2028. The airport is also planning a major expansion of its international terminal 1 precinct that will open in 2025. That is expected to facilitate Qantas moving from its facilities at terminals 3 and 4, located on the other side of the airfield, and complete the long-held plan to consolidate all the terminals in the international precinct.

Melbourne Tullamarine airport had been planning to move ahead with building a third runway that would enter operations in 2023. In July, however, the airport extended its consultation period and revealed that it was considering a change from an east-west to a north-south orientation. It has not indicated if that will jeopardise the timeline for a third runway to be commissioned.

Not all the action is happening at the major gateway airports, with significant expansion projects also underway at the country’s second-tier facilities.

Sunshine Coast airport is partway through construction of a second runway that is expected to be completed by the end of 2020. At 2,450m (8,040ft) long and 45m wide, the runway will allow it to accept widebody jets, up to the size of Airbus A350s and Boeing 787s.

Further south, work on the southern terminal project at Gold Coast airport is underway, with the new facility set to open in mid-2021. That will then kick off a refurbishment of the existing terminal area.

Last year, Adelaide airport started work on a A$165 million expansion project. A key part of that is creating the first dedicated international gate, which will be complemented by the existing “swing gates” that can change from domestic to international use.

Avalon airport has secured its long-held ambition of hosting international flights, with AirAsia X moving its Melbourne flights to the airport in December 2018. The airport’s operator, Linfox Group, also recently signed a co-operation pact with VietJet Air’s parent company, Sovico Group, that could pave the way for the Vietnamese budget carrier to fly there.

While billions of dollars will be spent in the coming years on new airport infrastructure, it is somewhat ironic that the decision point for most of those projects is arriving even while the Australian market is showing signs of slowing down, on both the domestic and international fronts.

Qantas and Virgin Australia have both signalled that their capacity growth over the six months to the end of December will be flat or slightly negative. Virgin may also face further cuts, pending the outcome of an extensive network and capacity review, as the carrier attempts to arrest years of losses.

Both carriers have pointed to lower consumer and business confidence in the domestic market affecting demand. Sluggish wage growth and fears that an economic slowdown could lead to the first recession in almost 30 years have weighed on outbound passenger demand – as has the recent devaluation of the Australian dollar.

That is starting to bear out in Cirium schedules data, which shows a small slowing in capacity (as measured by ASMs) this year, relative to a stronger growth trend in preceding years. 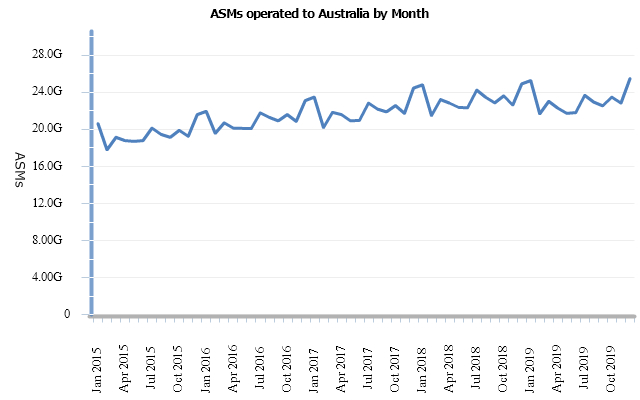 If the slowdown continues, it may lead to some investment decisions being delayed. Nonetheless, given the long-term horizons of airport investments, it is unlikely to lead to major changes in the plans of the airports.

A bigger factor may be a simmering dispute over passenger charges in Australia, which industry group Airlines for Australia and New Zealand (A4ANZ) has argued are too high and should face greater scrutiny given that the major city airports are natural monopolies.

The industry body released a Frontier Economics report in September 2018 claiming that more effective regulation of airport prices could deliver A$18 billion in economic benefits to the country.

Not surprisingly, the release of that report coincided with government think-tank, the Productivity Commission, launching an inquiry into airport charges. That prompted A4ANZ to call for the introduction of a “negotiate-arbitrate” model for airline-airport pricing deals. That would allow a mechanism to break deadlocks in price negotiations with airports, effectively giving more sway to the airlines.

But when the Commission released its draft report in February, it largely rejected the argument and found that the present approach of monitoring airports and not regulating their charges was satisfactory. The final report was handed to the government in June, but it has yet to be publicly released.

A4ANZ responded to the Commission by calling for the government to intervene by legislating the negotiate-arbitrate mechanism. But, apart from gaining some headlines, there has been little evidence that the campaign is putting pressure on the government to make a change.

At the same time, Perth airport has taken Qantas to court seeking to recover over A$11 million in lost revenue from the airline under-paying its invoices. That matter is still before the courts and may take some time to resolve, although it appears likely that a compromise will be reached before any judgement is made.

The issue stems from the end of the last pricing agreement in July 2018, when the airport and the carrier failed to agree to a new pricing agreement. After failing to reach that agreement, the airport began invoicing Qantas in accordance with its last proposal. In response, Qantas has short-paid those invoices, arguing that it does not pay charges that it doesn’t agree to.

Qantas adds that it will not launch any new international services from Perth while the standoff continues, including a nonstop Perth-Paris route. However, given that the airline’s 787-9 fleet is fully accounted for with existing and announced routes, it is likely that may not have been a priority route anyway.

The airports have not been taking the situation lying down. In mid-September, the Airports Association of Australia hit back at the airlines, noting that a government-collected air fare index shows that domestic air fares have risen 19% over the past three years, well ahead of inflation.

“The domestic carriers are very quick to attack suppliers and aviation partners when they think they’re getting a raw deal, yet they’re happy to slug travellers with pricey, uncompetitive airfares – because they can,” says the group’s chief executive, Caroline Wilkie.

While the public dispute between airports and airlines continues, the real threat is that if charges cannot be agreed to readily between them, it risks undermining the business case for further expansion. If, however, the market cooling continues, then both sides may be happy to slide investment decisions further into the future.