US rocket developer Blue Origin is preparing to start test flights “later this year” of a human-rated suborbital spacecraft following completion of acceptance tests of a reusable engine for vertical launches.

The BE-3 engine is billed as reusable, restartable and, critically, de-throttleable – enabling vertical landings. Blue Origin president Rob Meyerson says that 30,000s of firings over 450 tests has raised the confidence to begin test flights, including of the company’s New Shepard capsule.

Built at Blue Origin’s head office in Kent, Washington, and tested at its West Texas launch facility, the engine is billed by Meyerson as the first new hydrogen engine to be developed in the USA in a decade. It is capable of being throttled between 110,000lb-thrust (490kN) and 20,000lb-thrust.

The engine is a precursor to the more powerful BE-4, being developed in partnership with United Launch Alliance and due for test firings in 2016 and flight in 2019. Two of the 550,000lb-thrust, liquid oxygen/liquefied natural gas BE-4 engines will provide thrust equal to the RD-180 first stage engine that powers ULA’s Atlas V. Atlas V is a workhorse launcher for US security and scientific missions, but its RD-180 is ultimately sourced from Russia, which is cutting off exports in response to US and European sanctions imposed over the Ukrainian diplomatic standoff. 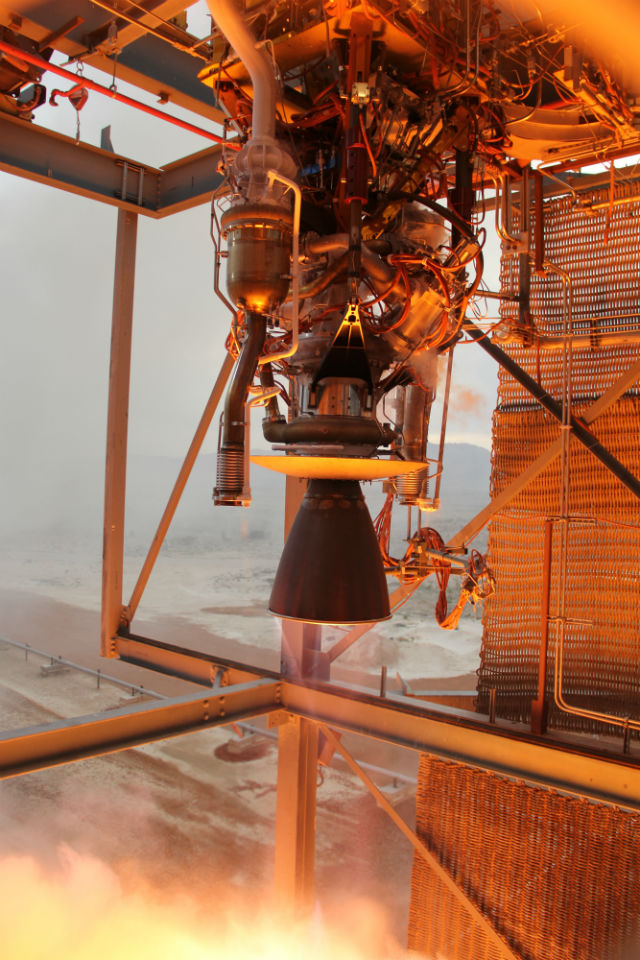 Russia’s 2014 move to end RD-180 exports will not leave ULA short of engines in the short term, but it did spur the US Air Force to call for development of an all-US launch system. Orbital ATK has declared its intention to propose an alternative, and SpaceX has in any case sued the US government for access, with its Falcon 9 rockets, to national security launches which are operated by ULA as a monopoly. Separately, ULA will on 13 April announce details of its next generation launch system.

Meyerson adds that the ultimate goal is to see the engine and capsule system reusable to survive “dozens if not hundreds” of flights, with the first-stage engines landing vertically under power at the launch site, and capsules landing by parachute in the West Texas desert.

New Shepard capsules will be capable of autonomous flight, and able to carry “three-plus” people depending on the mix of passenger and scientific payload. Meyerson declines to say when Blue Origin would start selling tickets for suborbital space rides, but stresses that the company’s goal is to drive down launch costs to make it possible for “millions of people to live and work in space”.

Orbital flights, he says, will follow when BE-4 is ready – adding that Blue Origin is already searching for a launch site suitable for much more powerful orbital operations. Upper stages will be a variant of the BE-3: BE-3U.

Blue Origin is privately funded, by its founder – Amazon billionaire Jeff Bezos – and its development contract with ULA.