An attempt to fly a hypersonic cruise missile demonstrator at Mach 6 has failed, after the scramjet engine powering Boeing's HyFly malfunctioned and the air-launched vehicle plunged into the Pacific Ocean.

The January 16 flight was the last under the HyFly programme, which was designed to demonstrate a missile-like vehicle with a range of 400nm (740km) and a maximum cruise speed exceeding Mach 6. The previous flight, in September 2007, failed to meet its objectives. 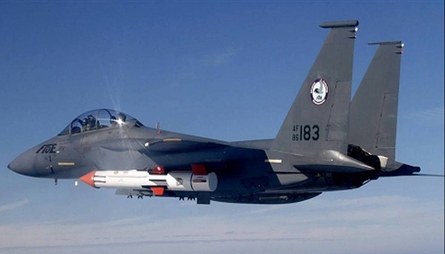 In the January test flight, the HyFly was launched from a Boeing F-15E off Pt Mugu, California and boosted by rocket motor to beyond Mach 3, where the dual-combustion ramjet was to take over and accelerate the vehicle to Mach 6.

"The scramjet engine did not operate as expected and, after approximately 58 seconds of flight, the vehicle impacted the ocean," says the US Defense Advanced Research Projects Agency. "We're reviewing flight data and no further details are available.

In the September flight, the booster seperated and DCR ignited, but did not accelerate the vehicle as planned. Two previous test flights, in 2005, had demonstrated safe separation from the F-15E and verified booster rocket performance.

HyFly is a joint programme between DARPA and the Office of Naval Research. Other high-speed strike missile options are being pursued, including the US Air Force Research Laboratory's scramjet-powered X-51A, which is planned to fly 2009.