‘Equal importance’ given to both corridors in MH370 search

Malaysia is giving “equal importance” to searching the two corridors that the missing Malaysia Airlines 777-200ER may have travelled after it turned towards the Andaman Sea on the morning of 8 March.

“The search was already a highly complex, multinational effort. It has now become even more difficult,” Malaysia’s transport minister Hishammuddin Hussein told media at a briefing on 16 March.

“We are currently discussing with all partners how best to deploy assets along the two search corridors. At this stage, both the northern and southern corridors are being treated with equal importance.”

Malaysia’s prime minister Najib Razak revealed yesterday that the aircraft continued to fly westwards for close to eight hours after its transponder was turned off, based on military radar data and automated signals that were sent from the aircraft. That has refocused the search on two possible arcs – one northwards between the borders of Thailand and Kazakhstan, and the other from Indonesia down towards the southern Indian Ocean.

“As the Prime Minister said yesterday, up until the time the aircraft left military primary radar coverage, its movements were consistent with deliberate action by someone on the plane,” says Hishammuddin. 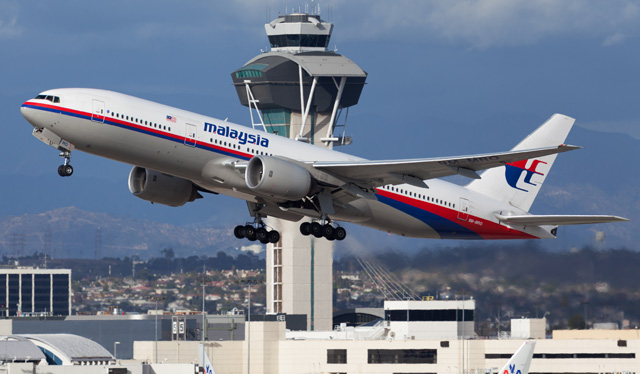 He adds that the government has been briefing representatives from the countries along those two arcs, and requested radar tracking data and information on search and rescue assets that could be deployed to assist with finding the missing aircraft.

In addition, Malaysia has requested satellite data from the US, France and China, “among others” to help find which direction the 777 headed after the last known position tracked by Malaysian military radar.

MAS chief executive Ahmad Jauhari Yahya confirmed at the briefing that the 777’s Aircraft Communications and Reporting System (ACARS) was disabled before the last radio transmission from the aircraft to the Subang air traffic control centre on the morning of 8 March.

Authorities revealed that there were six automated "handshakes" between the missing aircraft and the Inmarsat satellite constellation after ACARS and the transponder were disabled.

Hussein says that a team from Inmarsat has arrived in Malaysia and is supporting the investigation.

Malaysian police are continuing their investigations into all those onboard the aircraft, including the captain and first officer, as well as the ground crew that attended the aircraft before it departed from Kuala Lumpur. They confirmed that they have visited the homes of the crew, and removed from the first officer’s house a type of aircraft simulator, which is being analysed by experts.

The 777, registered 9M-MRO, went missing around 01:30 local time on 8 March while it was operating flight MH370 from Kuala Lumpur to Beijing. It had 239 crew and passengers on board.