The UK and USA have carried out the first short take-off test of the Lockheed Martin F-35B Lightning II during a ground-based test at Patuxent River Naval Air Station in Maryland, USA on 19 June.

This marks the start of the first phase of testing to certify the UK’s short take-off and vertical landing F-35B as capable of take off and landing from an aircraft carrier. The work is being controlled by the F-35 Pax River Integrated Test Force (ITF), assigned to the Air Test and Evaluation Sqn 23.

Test aircraft BF-04 took off on a ski-jump, demonstrating the F-35B’s ability to integrate into the UK’s future operations. The UK has selected the ski-jump approach as opposed to the catapult and arresting gear approach favoured by the USA in its carrier operations.

The UK’s new carriers – HMS Queen Elizabeth and HMS Prince of Wales – are shorter and contain an upward slope ramp at the bow, curved to allow for the F-35B to launch upward and forward at the same time. This allows the aircraft to take off with more weight and at a lower speed than a horizontal launch permits, the UK Ministry of Defence says. 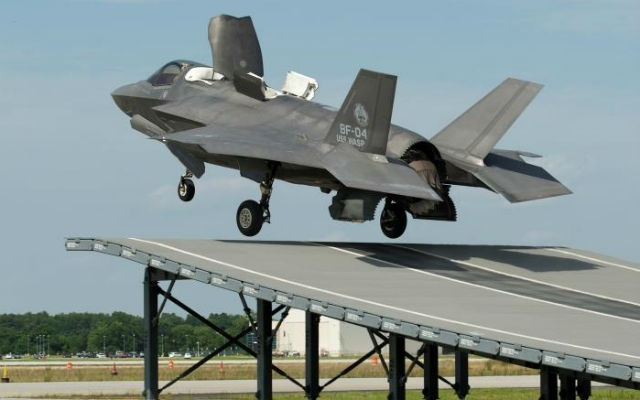 “As expected, aircraft BF-04 performed well and I can’t wait until we’re conducting F35 ski-jumps from the deck of the Queen Elizabeth carrier. Until then, the de-risking that we’re able to achieve now during phase I of our ski jump testing will equip us with valuable data we’ll use to fuel our phase II efforts.”

The 500lb dual mode weapons were dropped over the Atlantic Test Ranges at Pax River, marking the first weapons separation test of the Paveway by the ITF. The passive bombs safely separated from an internal weapons bay within the F-35B, Lockheed Martin says, and maintained the stealth characteristics of the aircraft throughout.