The US defense department and Lockheed Martin F-35 Lightning II engine supplier Pratt & Whitney have reached a “handshake agreement” in contract negotiations for production of 167 F135 turbofan engines, according to a joint statement released today.

The ninth and 10th low-rate initial production contracts buy 66 and 101 engines respectively, up from 36 and 48 in the previous two contracts.

That 110% jump from Lot 8 to 10 is being felt at P&W’s two F135 assembly sites in Middletown, Connecticut and West Palm Beach, Florida.

The government is also in negotiations with Lockheed for 157 more Lightning IIs as the manufacturer begins scaling up production at the final assembly plants in Texas, Italy and Japan 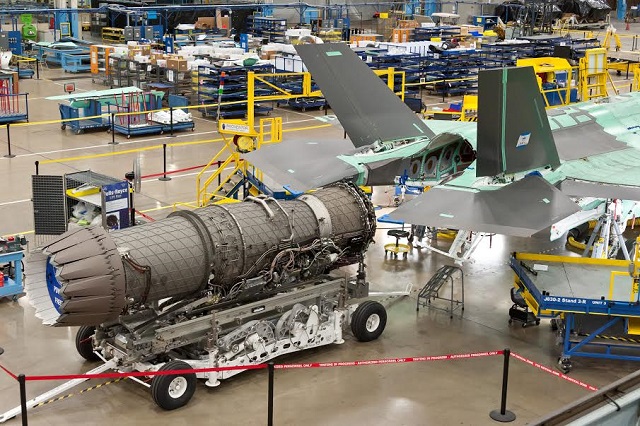 F135 engine ready for installation on a Dutch F-35

To date, P&W has delivered 262 F135s for all three aircraft variants. Lot 9 engines are already in production, with deliveries beginning this year followed by Lot 10 units in 2017.

The contractor and the joint programme office were keen to show the cost per unit has declined, since there are strong concerns among customers about the fifth-generation fighter’s affordability.

The unit price of 140 conventional engines for the F-35A and carrier-based F-35C declined 3.4% from Lot 8 to Lot 10, according to the statement. The unit price of 27 F-35B engines, which includes the Rolls-Royce lift fan for short takeoffs and vertical landings, has been trimmed 6.4% compared to Lot 8.

“This agreement for the next two lots of F135 engines continues to drive down costs and that’s critical to making the F-35 more affordable for the US military and our allies,” says F-35 programme chief Lt Gen Chris Bogdan. “We are ramping up production and witnessing tangible results.”