One year ago, a nascent F-15 Silent Eagle programme needed to be rescued from what seemed like an internal crisis of confidence given away by a stray comment made by a top Boeing executive. 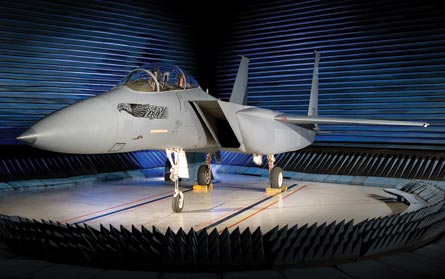 Bell's statement also contradicted a lower-ranking Boeing official, F-15 director Brad Jones, who had only a week earlier said that its first flight was planned in the first quarter of 2010.

According to Bell, Boeing had made no real internal commitment to funding Silent Eagle flight tests and, despite organising a dramatic public roll-out three months earlier, the F-15SE programme could still fall victim to internal funding cuts. "We're not at a point in the programme where we have a definitive path forward," Bell said.

Whether Bell spoke out of turn or mixed up his facts, the potentially damning statement became a blessing in disguise for F-15SE proponents. Just hours after the comment was reported, the Silent Eagle received a political trump card within the company: a personal endorsement by none other than Jim Albaugh, then president and chief executive of Boeing's defence business.

On 17 June 2009 Albaugh reaffirmed Boeing's commitment to the Silent Eagle. He indicated for the first time that a maiden flight for the F-15SE would be delayed by about six months, apparently so Boeing could engage potential suppliers and risk-sharing partners.

But the key message Albaugh sent on behalf of the programme was definitive: Boeing was committed to and investing in the future of the Silent Eagle.

Fast forward a year later, and the F-15SE has a right to enter the Farnborough air show in a confident position despite lingering questions about the accessibility of potential upgrades to foreign customers and the programme's appeal in the selective market for air dominance fighters.

While the Silent Eagle's future remains uncertain, Boeing has dutifully followed through on its commitment to advance the programme. A number of critical steps are complete on the path to first flight, which should now take place between July and September.

The progress of Boeing's timing on the programme is critical for two reasons.

Within weeks of the Farnborough event, South Korea could release a request for proposals for a new fighter to replace its ageing Northrop F-5s and McDonnell Douglas F-4s. The Silent Eagle is likely to compete against the Lockheed Martin F-35 Joint Strike Fighter and the Eurofighter Typhoon for the K-X3 contract.

Secondly, the proverbial clock is ticking on the 40-year-old era of F-15 production. Singapore and a previous order by South Korea are Boeing's only remaining customers, and the last aircraft is scheduled for delivery in slightly more than two years.

A new order must be sealed within the next year to avoid a costly gap on the production line, rendering new orders even harder to achieve for Boeing's F-15 sales team.

However, a new order by South Korea - assuming Boeing can overcome a US government-backed sales campaign on behalf of the F-35 to Seoul - could extend production for up to five years or longer.

Such a deal also could reinvigorate Boeing's Silent Eagle sales campaign to other existing F-15 customers - and likely F-35 buyers - such as Israel, Saudi Arabia and Singapore.

When the Silent Eagle was introduced, Boeing projected a market for 190 new or retrofit sales to the F-15's existing customers - an exclusive club artificially limited by meager international demand for an air dominance fighter with non-all-aspect stealth and the US government's reluctance to export the otherwise powerful fighter to other potential customers.

But keeping production alive now preserves any hope Boeing may harbour to capture the real prize: a fresh order by the US Air Force for new F-15 airframes, or perhaps a la carte-style purchases of key upgrades, such as the electronic warfare suite or the radar cross-section treatments.

However, a full generation of USAF leaders have pledged never to buy a fighter that is by design unshielded from radar detection from all possible angles, and the current chief - Gen Norton Schwartz - has not deviated from that singular, stealth-oriented philosophy.

But the USAF's unflinching position has not stopped Boeing's supporters in Congress, including Missouri senator Kit Bond, from reminding Schwartz about the increasingly urgent need to recapitalise the Air National Guard's fighter fleet at a faster pace than an all-Lockheed F-22 and all-F-35 fleet would be likely to allow.

Given the depth of the USAF's commitment to an all-stealth fighter fleet, new aircraft orders seem forever beyond Boeing's grasp.

But the Silent Eagle concept opens the door to a fleet retrofit in a la carte fashion. Indeed, Schwartz told reporters in March that the USAF is studying the need for a service life-extension programme for the F-15 and Lockheed F-16 - remnants of which are planned to remain in service through 2030 and beyond.

In the meantime, the 12 months after Farnborough is likely to determine how long the F-15 remains in production. The pressure is now growing on Boeing to prove the Silent Eagle is more than a paper concept.

First flight for the F-15E1 - a Boeing-owned technology demonstrator - modified with the first Silent Eagle improvements is scheduled for the third quarter of 2010.

On first look, the first flight aircraft may not resemble the cosmetically modified Silent Eagle concept that was unveiled in March 2009. That is largely because the 15e_SDgr tilt to the tailfins revealed at the factory unveiling is a future option, and is not incorporated into the flight-test programme.

The sole purpose of the series of three flight tests is to validate that a Raytheon AIM-120 advanced medium-range air-to-air missile or AIM-9 Sidewinder can be launched from a conformal fuel tank that an unnamed Boeing partner has transformed into an internal weapons bay.

"Really, from there we've proven our point," Jones says. "That's what our [potential] international customers are looking for: 'Thanks. You put it on a piece of paper, but now that you've demonstrated it, that means you can do it'."

Boeing has not released the identify of the conformal weapons bay supplier. With South Korea targeted as the most likely launch customer, it seems probable that the company would target a long-time industry partner in that country.

Korea Aerospace Industries, for example, has a wide-ranging relationship with Boeing, assembling airframes for AH-64 Apache attack helicopters and new wing skins for the Fairchild A-10. But Jones indicates that the weapons bay supplier may have no relation to the most likely launch customer.

The supplier was selected based "on the quality of their work, their commitment to innovation and their willingness to work as a team", Jones says, adding another key descriptor: "They have the technology to do this."

Jones's statement appears to narrow the supplier sources to existing F-15 buyers, such as Israel, Saudi Arabia or Singapore. As an F-15 customer and offset partner, Israel Aerospace Industries is responsible for delivering the CFT-3 conformal fuel tanks that are the basis for the weapons bay conversion.

The supplier's identity may be revealed in time, but Boeing's focus now is on completing the flight-test programme. It must show that the conformal weapons bays doors open and close, and the missile must be ejected cleanly, Jones says.

Implicitly, a successful result will confirm that Boeing has the launch rail correctly wired to the aircraft's databus.

"We took the wiring from [the F-15's existing] weapon station and moved it back into the weapon bay so we wouldn't have to change software," Jones says.

Boeing has budgeted for only one missile-launching sortie in the flight-test series. During first flight from its manufacturing base in St Louis, Missouri, the modified F-15E1 will open and close the doors to the conformal weapons bays. Data points will be gathered at varying speeds and altitudes to derive a launch envelope for the third flight test.

A second flight will ferry the aircraft to the missile firing range at Point Magu, California. Finally, the third sortie will seek to validate the operation of the weapons bay.

Beyond the completion of the flight test phase, the fate of the Silent Eagle programme could rest with Seoul's bureaucracy.

At the South Korea air show last October, US government officials appeared to make no attempt to maintain a level playing field between the two home-built aircraft in the pending K-X3 competition. Bruce Lemkin, the USAF deputy undersecretary attending the show, told the South Korean press that he hopes Seoul chooses the F-35.

Lemkin's staff, meanwhile, are included in the process that sets the export release policy for the F-15SE. The sale of key Silent Eagle capabilities - most especially, treatments and techniques for reducing the frontal-aspect radar cross-section - depends on the US government's willingness to allow Boeing to affect sales prospects for the F-35.

When Boeing unveiled the Silent Eagle in March 2009, Jones said that the F-15SE could compete with the frontal aspect radar signature of the international release version of the F-35, assuming that the US government allowed an equal playing field in the export release policy.

Since that time, Boeing completed a study in December that detailed the maximum radar cross-section reduction achievable by the F-15SE configuration.

The study "told us what we could do", Jones says. "Of course internally we had a target we wanted to get to, and so we met our own target."

Jones says that data was submitted to the US government. An export release policy for the Silent Eagle was approved in the second quarter, he says, allowing Boeing to submit requests for licences to brief specific customers about the aircraft's capability.

"We have been in discussion with the Koreans for some time," Jones says. "But we've only been able to provide ITAR [international trafficking in arms regulations]-controlled information. We've not been able to provide them the full-capability briefing they'd like to have."

Obtaining the Obama administration's export release policy now allows Boeing to request licences to provide more detail to customers on a specific basis. Whether that amounts to giving it a level playing field against its competition, Jones now declines to say.

Jones says he is not able to characterise the degree of frontal aspect radar stealth approved for release in the Silent Eagle export policy.

Through the export release process, the government selects which radar cross-section reduction techniques are allowable for each country that Boeing applies to offer the F-15SE.

"The US government knows what our target is," Jones says. "It's up to them to decide what they want to release."

In terms of boosting the F-15SE's overall survivability, such classified treatments designed to lower radar cross-section signature are only one method available to Boeing.

Far more simpler features are also available - and probably more easily exportable to foreign customers. Boeing, for example, offers a navigation pod that allows the F-15 to fly below most radar screens at under 100ft (33m) during night or day.

Since the F-15SE was unveiled, Boeing has also revealed a potential new upgrade for the Silent Eagle's cockpit displays. Customers have the option of selecting a large area display measuring 11 x 20in (280 x 508mm), Jones says. The panorama display is being offered in tandem with the export version of the F/A-18E/F Super Hornet.

But the key technology aimed at improving survivability in the Silent Eagle is the addition of BAE's DEWS, which is derived from technology aboard the F-22 and F-35.

"The key to the [DEWS] is that we have in the wing roots the [electronic countermeasure] transmitters," Jones has said previously. "So what we do is we have the digital signal go to the amplifier that's right there by the antenna so there's no power loss. So we're putting large amounts of jamming power at each of the antenna sources."

A graphic showing the DEWS lay-out on the aircraft includes antennas in the forward fuselage beneath the cockpit, at the wing roots, and at the tips of the empennage and tailfins.