The US Navy started operational tests of the F-35C aboard the Nimitz-class aircraft carrier USS Abraham Lincoln on the Atlantic Ocean on 28 August.

The USN says it has been evaluating the suitability of the F-35C aboard the carrier by tracking how well it performs with other aircraft and incorporates into an air plan, monitoring maintenance and identifying its logistics footprint.

“We hope to see how it integrates onboard the ship,” says Rear Adm Dale Horan, director, Joint Strike Fighter Fleet Integration Office. “Can we maintain it? Can we get the parts? Can we get it airborne? Can we repair it if it has a problem? Those are the kinds of things [we are looking for].” 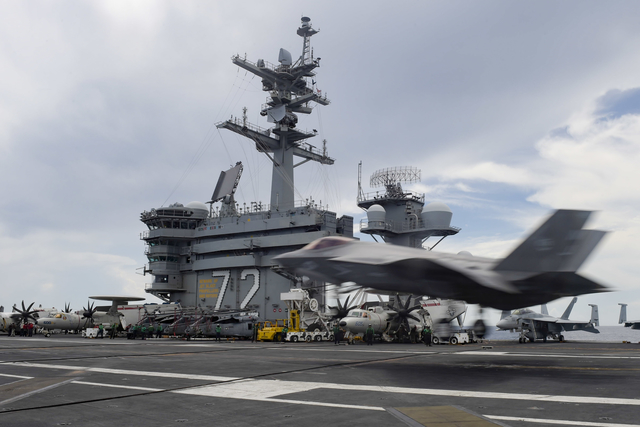 The F-35C is the naval variant of the stealth fighter. It has larger wings and more robust landing gear than the other variants, allowing it to be catapult launched and then arrested with a cable when it lands aboard an aircraft carrier, according to Lockheed Martin. Its wingtips also fold to allow for more room on the carrier’s deck while deployed.

The USN says it is also testing the effectiveness of the F-35C in real-world scenarios.

“We’ve been integrating with the strike group and accomplishing many missions like defensive counter air and anti-submarine warfare, for instance,” said Capt Matt Norris, from the Joint Strike Fighter Operational Test Team.

The mission simulations are important to gage how the stealth fighter’s communications and datalinks tie in with the carrier and other aircraft such as the F/A-18E/F Super Hornet, says the USN.

Ultimately, the tests are a precursor before progressing into initial operational test and evaluation, says the USN.