After foreign object debris, including forgotten tools, were found inside an undisclosed number of Boeing KC-46A Pegasus aircraft delivered to the US Air Force, the service suspended acceptance of the air refueling tankers on 20 February.

The USAF says it will not take deliveries again until all production aircraft have been cleared of debris and Boeing has formulated a plan to resolve the issue. Discovery of foreign object debris (FOD) caused Boeing to ground its undelivered KC-46A tankers at its Washington state facilities for inspections, according to a memo obtained by The Seattle Times. The USAF and Boeing confirm the issue to FlightGlobal.

For its part, Boeing says the grounding lasted about a week and flights resumed on 28 February.

“There was a training flight with US Air Force personnel that happened yesterday afternoon,” Boeing says. “We are doing whatever we need to do to make sure the Air Force is happy with their jets. Safety and quality are obviously the highest priority for us.”

“The Air Force takes foreign object debris contamination very seriously,” says the USAF. “We are aware of the concerns over FOD in KC-46 production aircraft. The combined Air Force, Defense Contract Management Agency and Boeing team is working together to resolve these concerns as safely and quickly as possible.” 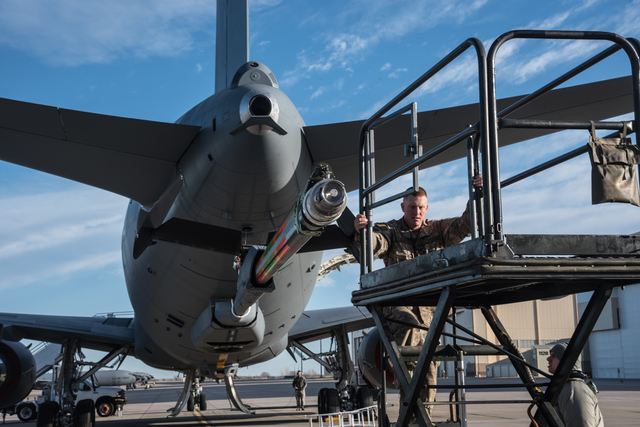 FOD issues with the KC-46A are the latest snag in Boeing’s air tanker programme. The USAF formally accepted the first KC-46A from Boeing on 10 January after more than a year-and-a-half delay caused by a string of design and manufacturing problems.

Under the service's original development contract, Boeing was supposed to deliver 18 operational aircraft, nine wing aerial refueling pod sets and two spare Pratt & Whitney PW4062 engines by August 2017, but that milestone is now unlikely to be reached until 2020. Instead, the USAF accepted incomplete, slightly-less-than-fully-functional tankers which are able to operate in most situations. Outstanding issues included a lack of complete aerial refueling pods and sunlight glare problems with the tanker’s refueling boom camera.

Boeing played down the impact of the FOD problem, describing the issue as a temporary pause of deliveries. The company says it still plans on delivering three aircraft per month in 2019, though it says efforts to deliver four or more tankers per month in the first part of the year will depend on discussions with the USAF.