Lori Cline became the youngest airline captain in the world on the day of her 23rd birthday. Now she is chief pilot at American Airlines' second-largest hub: Charlotte Douglas International in North Carolina.

I started flying before I was driving, taking lessons in my grandfather's Cessna 172 at the age of 13. I attended Indiana State University and received a Bachelor of Science degree with a double major in aviation administration and professional flight.

What was your first job?

Helicopter pipeline patrol, which, as I look back, is probably a flying job you only sign up for when you're young and dumb. Flying at 300-400ft smelling for sulphur (which signalled a leak), or checking for farmers who may be digging too close to the gas line seems highly perilous and fraught with unnecessary risk now that I'm older and wiser.

I was hired by Atlantis Airlines, a commuter in the southeast, in 1981. While there, I was passed over for captain nine times – not because I was a woman, but because I wasn't old enough to get my air transport pilot (ATP) certificate. You had to be 23. Finally, a captain's slot opened about six weeks before my 23rd birthday and both the director of operations and director of training took turns coming out of their offices to fly the trips in that line to hold it for me. I went to the Federal Aviation Administration office at opening time on the morning of my 23rd birthday, they endorsed my ATP and on that very day I hopped into the left seat to fly as the youngest airline captain in the world. I was hired by a major airline, the original Piedmont Airlines, in 1984 as a flight engineer on the Boeing 727, the Cadillac of the Boeing fleet. To this day, it is still my favourite aircraft. I upgraded to captain nearly three years to the day after I was hired. Piedmont merged with USAir in 1989. There, I spent five years in the flight safety department as both the manager and director before joining the Airbus training department, and then spent another 18 years as an A320 check airman, aircrew programme designee and standards co-ordinator.

Neither Piedmont nor US Airways ever had a female chief pilot so the chief's position for me at American at our Charlotte Douglas International airport (CLT) hub is new from many perspectives. 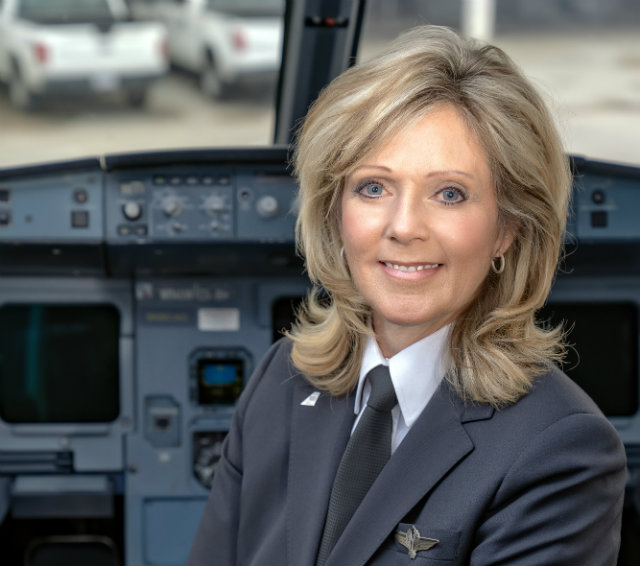 There are 1,500 pilots in CLT and three chiefs in our office. Together, we provide administrative assistance and act as resources for the continuous needs of the pilots at our base. Most pilots say they prefer to go their whole careers without paying a visit to the chief pilot's office, so when they do it is certain there is some pebble in their shoe they need help with. Whether it's helping to co-ordinate time off for an impending surgery or helping to adjust their pay to ensure they are properly compensated, I act as their direct link to solving whatever problems they may have.

The best part is the fact that in the course of a day you can dramatically and positively impact dozens of pilots by assisting them, which is immediately satisfying. The worst part is the realisation that bad things happen to good people, such as when a pilot's loved one passes away or they themselves are stricken with some illness that may temporarily or permanently keep them on the ground.

What's the reaction to having a female chief?

As for the gender issue itself, being 2019, I have overwhelmingly felt a collective "it's about time" sigh from every area. Diversity in the chief pilot's office is great for the base because it better reflects the diversity of the pilots we represent at the world's largest airline.