When the annual EBACE business aviation show kicks of in Geneva on 24 May, Dassault’s new flagship business jet, the ultra-long-range Falcon 8X, will be just days away from its planned joint European Aviation Safety Agency (CS 25) and US Federal Aviation Administration (FAR 25) certification. Its entry into service is planned for the third quarter of 2016.

As a guest of Dassault, and on behalf of Flight International, I was invited to test fly and evaluate one of the production-standard 8X test aircraft, from Istres, near Marseille in southern France, in early April.

Dassault describes the 8X as an evolution of its hugely successful Falcon 7X/EASy III cockpit – rather than a revolution – but one with a slew of extra cabin options, a substantial range increase and a raft of further avionic and reliability upgrades. All this while retaining the 7X’s outstanding characteristics, including its fly-by-wire digital flight control system; its flexibility in short field (and therefore non-hub) operations, both for landing and take-off; continued certificated steep approach capability (e.g. to airports such as London City, Lugano, La Mole and St Moritz); having a basic empty weight lighter by up to 25% or more than competitors; and with direct operating costs lower by even more significant margins, of up to 35%.

I have flown the 7X four times for Flight (to evaluate the aircraft on the day of its joint EASA/FAA certification in 2007, and then its EASy II cockpit, its head-up display/enhanced vision system and its short field operations), so I was familiar with that aircraft’s handling and capabilities. I have also stated on several occasions that, in my opinion, the 7X is by a considerable margin the best of the 30 or so large business jet types I have flown. My evaluation objectives were simple: does the new 8X better the 7X, and are its upgrades enough to warrant a new type designation? 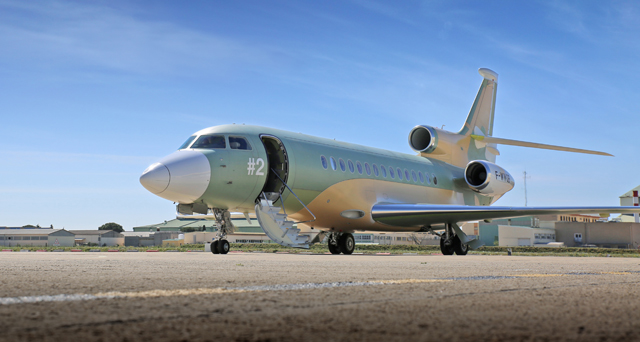 Longer fuselage than the 7X, but with no empty weight penalty and more engine power 8X performance still delights

The 8X flight test campaign started in early February 2015 with three test aircraft of production standard, and these have since completed over 650h during 300 test flights. Test aircraft #1 and #2 (which I would fly) are still being used for final certification purposes, but aircraft #3 spent almost the whole of April flying an intense set of worldwide proving flights in a full production form with a fully optioned customer cabin. These started in France with multiple, daily, short-range European flights, progressing to Northern Canada for cold operations and a long-range single-transit from New Jersey (Teterboro) to Dubai to prove hot operations in the Middle East. There followed a series of demonstration flights around Southeast Asia, including to the ABACE Asian business aviation conference and exhibition, and a maximum-range single flight back to Europe. The proving tour will conclude with flights around South America, including La Paz, Bolivia, to prove hot and high airport operations.

The reason for this punishing set of proving flights is for Dassault to absolutely “customer proof” the 8X before entry into service, so that it equals or exceeds the reliability of the latest 7X production aircraft in all areas – including aircraft and cabin. Dassault also wants to prove “without question” its ultra-long-range credentials.

The first and physically most significant change is a 1.1m (3.6ft) fuselage extension (using both a fore and an aft plug), to 24.5m. The fuselage section is identical to the 7X but the extension has allowed Dassault to increase internal fuel capacity (of the centre-mounted tanks) of the 8X by 1,360kg (3,000lb) to 15,840kg. The extra fuel endows the 8X with a range of 6,450nm (11,900km) with a standard configuration (Mach 0.80, three crew/eight passengers, ISA, sea level departure and arrival, zero wind, NBAA instrument flight rules reserves), adding non-stop city pairings such as Jeddah-New York and Singapore-Paris.

The fuselage extension also allows Dassault to offer three new distinct entryway options (short, middle and long) and more than 30 new cabin layout options, including a full shower. However the significance of the long entryway option is that, for the first time, an ultra-long-range business jet has a full-length crew rest area for a third pilot (as a mandatory legal requirement for flights of over 13h). This long entryway option also boasts a new massive galley while retaining the 7X’s cabin length, which itself equals close competitors including the Bombardier Global 6000 and Gulfstream 500, 600 and 650. Cabin widows (per side) are increased from 14 to 16. Measured cabin noise levels are claimed to be just 50dB, lower than the 7X and quieter than the expected theoretical values.

The 8X has virtually the same wing span (86.3ft), wing area and wing profile as the 7X but now features more curved winglets (to Dassault’s own design) and profile optimisation of the wing section in several places. Cleverly, Dassault has redesigned the internal wing structure and the 272kg weight saving equals the weight gain of the fuselage extension, so the basic empty weight of the 7X and the 8X are identical. Consequently, the 8X's maximum take-off weight (MTOW) is exactly 272kg heavier than the 7X, at 33,140kg (but with gear reinforcement) and it retains the ability to land at 85% of its MTOW. Balanced field length take-off (ISA, sea level) at MTOW is 6,000ft. Maximum landing weight remains 28,330kg and maximum zero fuel weight is now 18,600kg. Landing reference speed (Vref) when at NBAA IFR reserves is a staggeringly low 106kt (196km/h) indicated air speed (KIAS) coupled with a landing distance of just 2,150ft. Maximum cruise altitude remains 51,000ft; maximum operating speeds are Mmo M0.9 and Vmo 370 KIAS. 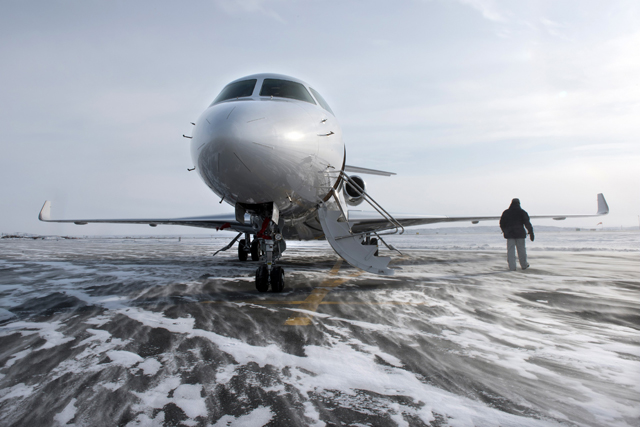 The 8X is powered by three Pratt & Whitney Canada enhanced PW307D engines (with higher thrust/lower fuel consumption), rated at 6,700lb (29.9kN) thrust (sea level, ISA) and flat rated up to +32˚C. The 2% specific fuel consumption improvement of the PW307D means the specific air range of the 8X remains the same as the lighter 7X.

The 7X and the 8X will share a common type rating and be covered by a two-day, differences training course.

My evaluation aircraft was the #2 8X test aircraft, registered F-WWQB. My safety pilot was Dassault’s chief test pilot, Philippe Deleume. I would fly the complete evaluation from the left-hand seat with Philippe handling the navigation and radio, taking off and landing from runway 33 at Istres (LFMI).

The 8X cockpit and EASy III avionics remain virtually identical to the 7X to a seated pilot. Programming the EASy III remains simple, with a mode-based display taking the pilot diagrammatically through start-up, take-off, climb, cruise and approach phases. I still prefer how the EASy III screen sub-divides into 1/6, 1/3, 2/3 or whole screen, rather than the 1/2 or whole screen options of the Rockwell Collins Vision.

Nosewheel steering is via the rudder pedals and my only comment was that the foot brake sensitivity was slightly “sharp” for very small brake applications. Engine acceleration at engine roll was about 3-4s before the power accelerated quickly. Thereafter, take-off acceleration was brisk with a fixed attitude symbol used to raise the nose to approximately the correct attitude before the flight direct was followed by the flight path vector. 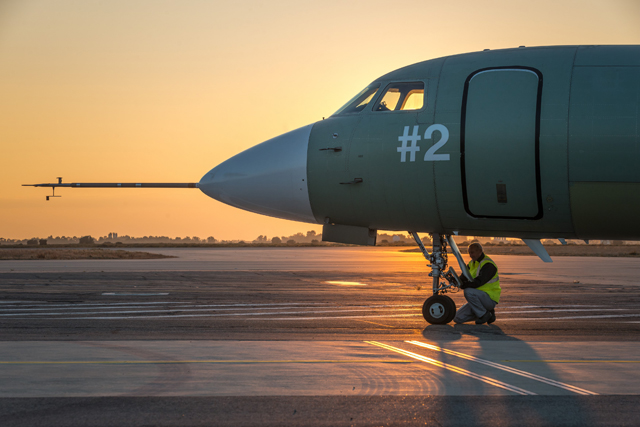 In the climb I marvelled again at the 8X fly-by-wire auto-trim function and also the control mechanical characteristics of the side stick controller; it had perfect centring, minute breakout, zero freeplay and perfectly co-ordinated force and displacements in terms of the pitch and roll axes.

Handling quality assessments in normal laws were made clean at 250 KIAS and also SF1/gear down at V2 +10kt; SF2/gear down V2 and SF3/gear down. All showed similar roll rates of approximately 45°/s at full stick deflection (the fly-by-wire being roll rate laterally and g-command in pitch). Low speed with autopilot engaged showed automatic autothrottle when the aircraft’s speed decayed to the low speed cue in the primary flying display. This was coupled with aural warnings of “increase speed”. With the autopilot and autothrottle disengaged, holding the aircraft in a 20-25° nose-up climb with full-back stick invoked a gentle nose drop as the aircraft’s speed equalled the low speed cue.

Forcing the fly-by-wire into alternative laws (to simulate a type channel failure and need for redundancy), all the normal law functions were present, apart from the automatic low speed function with autopilot engaged.

Further forcing the fly-by-wire into direct laws, (to simulate a computer failure) the aircraft felt slightly more sensitive in pitch and the roll rate was reduced to approximately 30°/s at full stick deflection.

Restoring the fly-by-wire to normal, the aircraft climbed up to 40,000ft from 15,000ft. Handling at M0.8 was assessed and found to be unchanged from the 7X. At a 45° angle of bank turn level, there was just a first hint of wing buffet. A maximum rate descent was then made at Mmo, hand flown with airbrakes at the AB2 position. The aircraft was held in a tight spiral at Mmo converting to Vmo at approximately 25,000ft and was easy to fly while maintaining the speed limit but still generating over 10,000ft/min rate of descent.

Levelling off at 10,000ft, the aircraft was set up in the cruise to assess the double fly-by-wire sidestick controller input, given the Dassault philosophy of passive sidesticks (rather than force feedback positioning of the opposite stick to replicate the other stick movement). As well as an audible waning of dual stick input, both sticks vibrated, providing an absolutely clear tactile warning to each pilot.

Finally, two very tight visual circuits were flown at Istres, including a final one with a massive lateral offset on short finals. Vref was approximately 116 KIAS, and both could be flown with the ease of a fighter into a very soft but accurate touchdown aiming point.

While it was difficult to imagine improving the 7X, it would seem Dassault has achieved this with the new avionics of the EASy III cockpit, including the double HUD/CVS Falcon Eye system, an extended range that will virtually connect all worldwide city pairs, take-off and landing performance that exceeds its competitors and the flying characteristics of a fighter that exceed that of the 7X. Its evolutionary upgrades from the 7X easily allow the 8X to earn its classification as a new aircraft type and its Dassault flagship status. Finally, the Falcon 8X is very much an aircraft that rates its title as the best business jet I have flown.