Ahead of his being named as Delta Air Lines' CEO-elect, Ed Bastian – a key architect in the carrier's success – spoke to LEK Consulting's John Thomas and Spencer Stuart's Michael Bell, who have been conducting a series of behind-the-curtain analyses for Airline Business to understand how the industry's top players excel

Over the last five years, Delta Air Lines has redefined the financial performance that is possible from a global carrier, growing into the largest market capitalisation ever seen from an airline (roughly $40 billion, as of October 2015) and generating economic profits – over and above its cost of capital – of close to $10 billion over the past five years in aggregate.

Key to Delta's record of achievement is a strong focus on non-financial fundamentals. We sat down with Ed Bastian – then Delta's president, and as of yesterday its CEO-elect – to get a better sense of the ingredients responsible for the airline's industry-leading performance.

Are there specific elements that have allowed Delta to maintain its ongoing rate of growth?

"At Delta, our core principle continues to be centerd around looking out for our people as well as our customers. It has taken a decade, but we feel we have achieved a level of operational stability and customer satisfaction that is unparalleled within the industry. This is first and foremost a people business – and if you take good care of your employees, and treat them with respect, they will do the same for the customers. Married to this is a strong operational mindset – our chief executive, Richard Anderson, leads from the top down and with a deep operational curiosity that is visible throughout the organisation.

"By taking care of what we consider to be the basics, we have been able to attain solid revenue premiums along with consistently high customer and employee satisfaction scores, which we believe will continue to produce superior financial results." 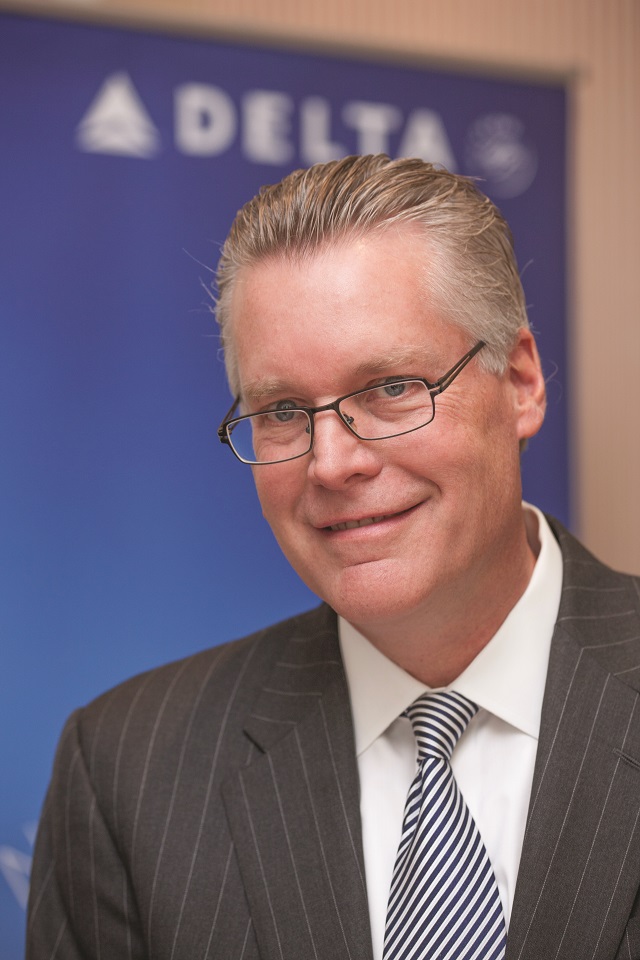 How would you characterise Delta's workforce culture, including its impact on the airline's bottom line?

"Rather than focusing on the hard product, as is often the case in this industry, we have prioritised the softer side of the business, such as nurturing our culture, which we believe helps define our business strategy. For example, our fleet includes a mix of both used and new aircraft, which enables us to maintain economic stability while promoting prudent capital spending.

"Thanks to our industry-leading technical operations team, we are able to provide a great customer experience while simultaneously generating top-level operational results.

"This in turn has allowed us to make significant workforce investments – such as our Delta TechOps, which lets us keep more of our maintenance work in-house – while also focusing on customer-facing enhancements that include our aircraft interior refurbishment programme (that made us the first US carrier with a truly lie-flat, business-class product throughout our long-haul fleet), as well as our revamped Delta Sky Club airport lounges, to name a few."

Can you cite some examples of Delta's approach to employee engagement?

"Speed of decision making and execution is critical but in order to properly execute you need to start with a well-aligned organisation. This again ties back to the focus on our people.

"For instance, we regularly hold town-hall meetings where leaders can have open and honest discussions with our employees about the state of the business and what we can do together to achieve our goals. In 2006 we launched our 'Velvet Series', which began as an annual employee conference but has since become a symbol of the Delta culture and mindset."

In what ways has the company strived to be innovative with respect to its strategic investment opportunities?

"It has been our goal to avoid the industry paradigm of being over-exposed to externalities – instead, we want to have greater control of our destiny and be bolder in our approach. This has led us to develop new ideas for the industry, such as our oil-refinery subsidiary [and] our investments in international partners such as Virgin Atlantic, Aeromexico and China Eastern, as well as reshaping our loyalty programme to reward customers who have been consistently devoted to the airline.

"Embedded within our culture are some basic rules of thumb, such as striving to be humble, remembering where you came from, having a sense of humility, as well as maintaining a collaborative approach to 'climbing even higher'. In other words, rather than just focusing on market share, we are instead committed to growing the size of the prize, which we believe will allow us to continue building a solid foundation for future success."

What about the role of Delta's management in the success of the organisation?

"From a leadership perspective, it is all about keeping the team together. Our senior management group has had very low turnover relative to the rest of the industry, and we continue to work together and continually challenge one another for the betterment of the airline. Nor is this approach limited to our senior executives – leaders at all levels have the ability to raise the bar when needed, so that their teams do better.

"The results are often amazing: for instance, our domestic mainline operation recently went 200 days without experiencing a single cancellation, a feat never before achieved within the US airline industry."

Is there a downside to becoming a much bigger, better capitalised business than the one that existed just 10 years ago?

"It was easier to have a bolder approach a decade ago, when there wasn't as much to lose. Today, Delta is the world's largest airline by market capitalisation, and with this continued growth there is always the danger of becoming too risk-averse. Nevertheless, we remain focused on building a business model with a long-term outlook, as evidenced by our recent investments in developing regions such as Brazil and China.

"At the same time, it is crucial that we maintain our sense of urgency. We recently hired 1,000 new employees, and a key part of the onboarding process was ensuring that they fully understood our culture and this desire for a sense of urgency in all that we do."