Las Vegas-based Allegiant Air will continue in its expansion to secondary US cities this spring, with a wave of new routes that will also see the airline landing in the Washington DC metro area.

The ultra low-cost carrier will launch flights on 19 new routes, most of which are currently unserved. Allegiant will add three new destinations to its route map: Baltimore/Washington, Destin-Fort Walton Beach (Florida) and El Paso (Texas).

Serving Baltimore/Washington "makes a lot of sense" to Allegiant, its vice-president of network and pricing Lukas Johnson tells Flightglobal in an interview.

The airline had considered serving the Washington DC metro area through Washington National or Washington Dulles airports, but concluded that Baltimore/Washington was the best choice.

Johnson points out that slot constraints at Washington National would have made it difficult for Allegiant to launch service, while Washington Dulles would be less convenient for Baltimore-area travellers. Dulles is also already relatively well-connected, he adds.

"There is no perfect airport in the region," says Johnson. "But we thought BWI captures all of Baltimore and also DC."

Allegiant's arrival at Baltimore/Washington will be in time for the peak summer travel season to the nation's capital, notes Johnson. The Baltimore/Washington-Savannah route also caters to leisure travel demand going the other way to Savannah, he adds.

Among Allegiant's new Baltimore/Washington DC routes, it will face competition on only one - to Cincinnati, against Delta Air Lines. Johnson points out that Delta operates 49-seat regional jet service between the two airports, while Allegiant's narrowbodies will offer more gauge.

The airline's addition of El Paso and Destin-Fort Walton to its network will mostly cater to leisure and visiting friends and relatives traffic. Allegiant will connect El Paso to Las Vegas and San Diego. It will compete against Southwest Airlines on El Paso-Las Vegas but will be the lone carrier operating nonstop between El Paso and San Diego, a route that Southwest had operated up to 2013, schedules in Innovata show.

"We want to keep it going for Florida," says Johnson.

Allegiant will operate twice weekly on all the routes, with a mix of Boeing MD-80s and Airbus A320 family aircraft. 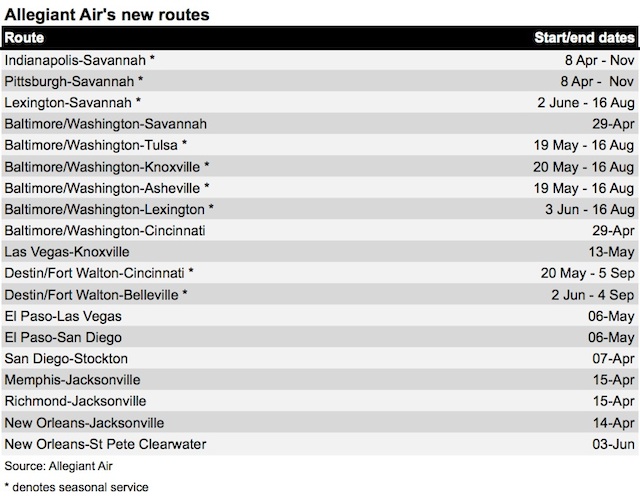