JetBlue Airways has hinted that it will pull the trigger in April on an order for the Airbus A321LR to begin service to London, after years of flirting with the prospect of launching transatlantic flights to Europe.

The airline recently sent a save-the-date to employees, inviting them to an event on 10 April in New York to discuss the airline's "vision and strategy". After the invitation began circulating on social media, eagle-eyed observers noticed the choice of background used in the invitation – it bore a striking resemblance to the seat fabric on the London Tube. 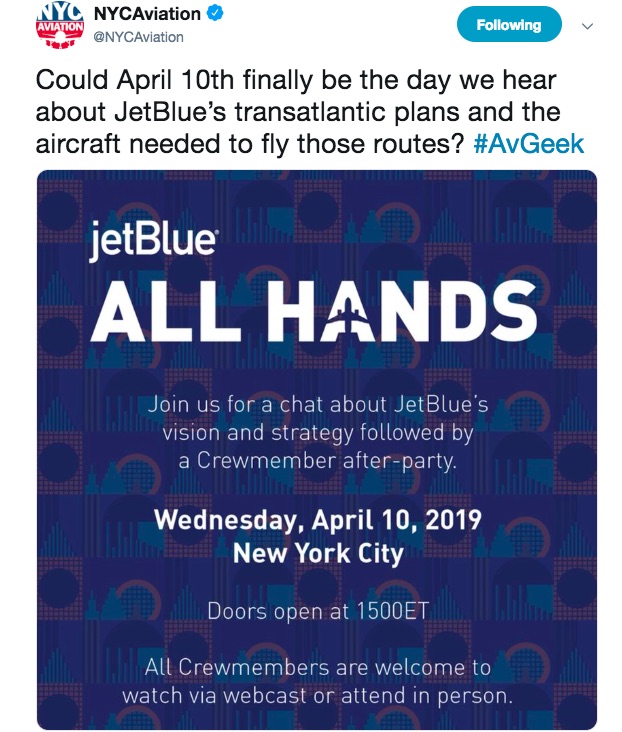 Could April 10th finally be the day we hear about JetBlue’s transatlantic plans and the aircraft needed to fly those routes? #AvGeek pic.twitter.com/Rr4Gc7lizd

JetBlue previously said it plans to announce a decision on the Airbus A321LR this year, which will allow it to begin transatlantic flights.

A JetBlue spokesperson, without confirming or denying plans for London service, reiterates that timeline. "Potential routes to Europe could provide us an opportunity to grow our focus cities of Boston and New York as we consider the best use of our aircraft from a margin perspective in those cities," he says.

The New York-based carrier added the A321LR option to its planning in July 2016, when it announced an order for 30 additional A321 aircraft split evenly between the A321neo and A321ceo. That order came with the option of converting A321neo deliveries to the A321LR starting in 2019.

JetBlue has ordered 85 of the A321neo aircraft, Cirium's Fleets Analyzer shows. The airline is scheduled to take delivery of its first A321neo this year.