Spirit Airlines will add Austin as its 70th destination in February 2019, as the ultra low-cost carrier continues with a stream of new route announcements in recent days.

Spirit will operate daily on all nine routes. It will face competition on all of the city pairs, FlightGlobal schedules data show. 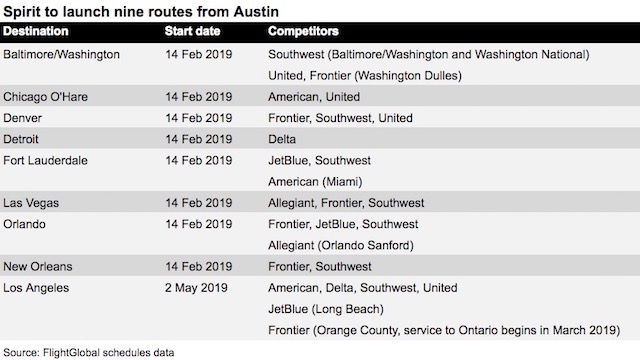 "Austin is not only a booming hub for music, cuisine and the arts, but it has quickly become an economic driver for multiple other industries," says Mark Kopczak, Spirit's vice-president of network planning.

“Texas’ capital city is a place where we believe our affordable fares and signature service on nonstop flights will resonate and bring both visitors and local residents in and out of the heart of Texas."

Austin has featured among US airports seeing significant growth in recent years. The airport ranks in second place among large and medium US airports that have reported the most growth in scheduled seats in the past five years, according to an Airlines for America presentation today, citing FlightGlobal schedules data.

Scheduled seats grew 57% at Austin between 2018 and 2013, according to the data. Dallas Love Field saw the highest growth within the period, with seats up 70%, driven by a surge in capacity from hometown carrier Southwest Airlines following the repeal of the Wright Amendment in 2014.

Austin will become Spirit's third destination in Texas after Dallas/Fort Worth and Houston Intercontinental.

Spirit's plans to begin Austin service is the latest route announcement by the airline in recent weeks. The carrier had unveiled plans to add more flights to Jacksonville, before it even begins serving the city in Florida in December. It has also announced more flights to Orlando and San Juan.