For more than a decade, Flight International readers were treated to in-depth flight-test reports written by Peter Collins, who has died at the age of 62.

Having joined the Royal Air Force in the mid-1970s, becoming a British Aerospace Harrier GR3 ground-attack pilot, in early 1982 the then Flt Lt Collins was trained to fly the Sea Harrier FRS1 fighter on exchange with the Royal Navy Fleet Air Arm. He was deployed later that year to help defend the repatriated Falkland Islands, operating the “SHAR” in the combat air patrol role from the deck of the aircraft carrier HMS Illustrious. During a two-month tour of duty “down south” with 809 NAS, he recorded 66 deck landings aboard the vessel.

Writing for Flight International in 2009, as the RN marked its centenary of aviation, Collins recalled his first familiarisation flight in the Sea Harrier, which had been conducted from RNAS Yeovilton in Somerset using a ski-jump ramp. “There was no Sea Harrier T-Bird [trainer] and no simulator training; just a quick cockpit self-assessment in the last FRS1 left in the UK. And then go: taxi up to the very bottom of the ramp, gaze upwards at what looked like Mount Snowdon (the ramp was set at the maximum angle of around 18°), remember some words of wisdom from somewhere, pause, slam the throttle, depart the lip, take nozzles and fly away. Piece of cake!” 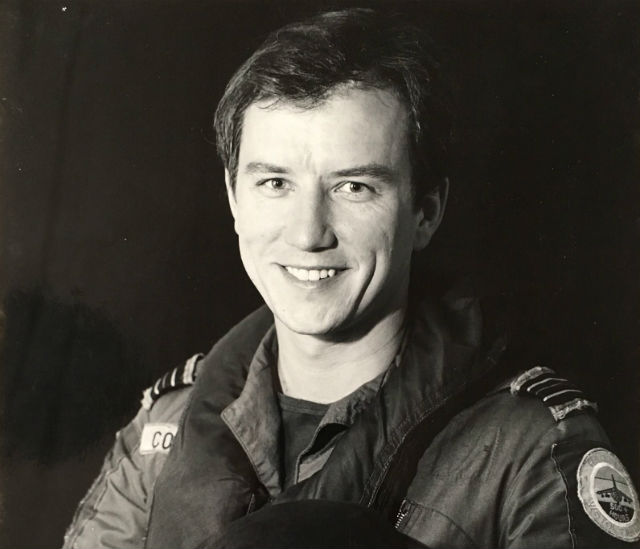 Following further experience on the Harrier GR3 and a spell as a tactics and weapons instructor at RAF Chivenor, Collins later claimed one of the most sought-after seats in the RAF, as a member of its prestigious Red Arrows aerobatic display team. He spent three seasons flying the BAe Hawk T1, from 1986 to 1988, including as “Red Two”, during which time he was promoted to the rank of Sqn Ldr.

After his time with the Red Arrows, he went to the Empire Test Pilots’ School at Boscombe Down, graduating as an experimental test pilot in 1989. This led to him flying types including the VAAC Harrier testbed at the then RAeS Bedford; a platform that would go on to prove the flight control laws that pilots of Lockheed Martin’s short take-off and vertical landing F-35B now enjoy.

After leaving the air force in 1993, Collins tried the airliner route, for a while working with both Air UK and KLM UK. He then joined Raytheon Systems UK in 2004 as head of flight operations and chief test pilot. During the following years he worked on the development and in-service enhancement of the RAF’s Bombardier Global Express-derived Sentinel surveillance aircraft and its Beechcraft King Air 350ER-based Shadow R1. Leaving Raytheon last year, he turned his attention to 4front Aviation; a private company he had established, offering services such as flight-test expertise, technical support and media comment.

In his 12 years as a valued contributor to Flight International, Collins flew a wide array of types, with his reports ranging from top-of-the-market business jets to military trainers, fighters and general aviation aircraft. Totalling more than 20 individual models – plus multiple sub-variants – from manufacturers including Antonov, Dassault, Grob Aircraft, Irkut, Korea Aerospace Industries, Leonardo’s Aermacchi and Pilatus, these contributed to his career total of 119 fixed-wing types flown and evaluated, and more than 10,000 flight hours. 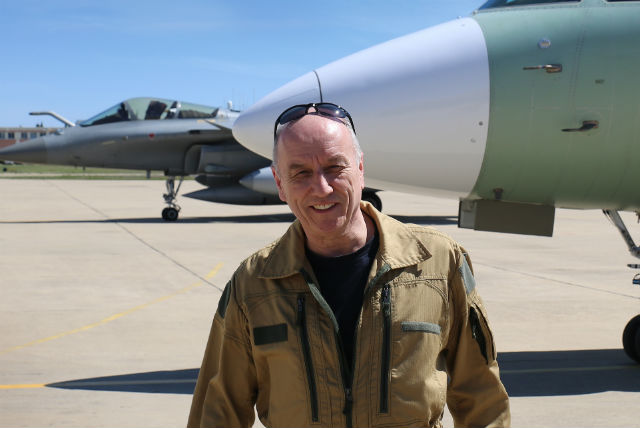 His final piece for the magazine was an evaluation of the Dassault Falcon 8X (Flight International, 17-23 May 2016), during which he assessed its flagship performance ahead of the EBACE show, and summed it up as “the best business jet I have flown”.

Friendly, funny, and every bit the professional test pilot, Collins was a credit to his military and industry colleagues. Paying tribute to him via his Twitter account @testpilotpete, his family referred to his “incredible life” and described him as “an accomplished, loving and kind man”.